I’ve always had a soft spot for the 1981 vintage as well as these two châteaux. This was the first vintage of Bordeaux that I bought, back in 1984, with some knowledge of the region (or so I thought at the time) and Cos because the first serious vertical that I ever attended was of their wines from 1982 back to 1952. Pavie? Well, to be honest, it was the label that drew me in at first, being all old-timey Bordeaux and all. The first Pavie that I bought was a 1979 from a wine shop in Boston and from the get-go I was hooked on the blend of power and finesse that a St.-Emilion from a great terroir can exhibit. Being able to visit both of these estates in late June of 1989, on the same broiling hot day, sealed the deal. 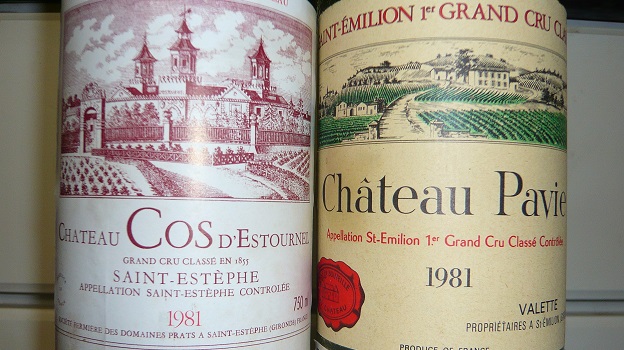 Ninteen eight-one is what some would derisively call a ‘classic’ or ‘restaurant’ vintage. In the old days some would say ‘a useful vintage’ for the fact that the wines are mostly to be drunk while waiting for “great” vintages to mature or to keep ones’ hands off of already mature ‘great’ vintages resting in the cellar. That belittles wines such as these two, I think, because more times than not I crave a graceful, finely delineated and less dramatic wine than one from a blockbuster vintage.  Both of these bottles deliver the goods.

Purchased by a good friend on release here in New York, both the Cos and the Pavie are decidedly at peak but based on these bottles there’s no need to fear the reaper. The Cos is a textbook rendition of the old style at the châteaux, with intense cigar box, dried cherry, licorice and pipe tobacco character and smooth, harmonious tannins that have all but faded away. As might be expected, the Pavie is more dramatic in character, but still showing the restraint that’s been typical of the ‘81s since release, offering a haunting, floral- and spice-dominated bouquet and plush, seamless plum and cherry flavors. Like the Cos, it’s fully mature but there’s no sign of undue fatigue, either.  In both cases, pretty remarkable for 34 year-old wines from a vintage that’s now been mostly forgotten, but not by me.