Umbria: Taking It to the Next Level

The romance and terroir of Umbria alone are enough to excite any lover of Italian wine and culture. The vineyards surrounding Montefalco (“falcon mountain”), a medieval hilltop town, produce big, burly, age-worthy reds from Sagrantino. This grape seems to excel only here, while the age-worthy bianco, Orvieto, has been enjoyed internationally long before many of Italy’s inspired white wines were ever discussed. Trebbiano Spoletino, another native white, has emerged and is now turning heads and receiving much attention from producers. Umbria is one of Italy’s few landlocked regions, with a terroir so unique and complicated that it can also shine at producing its distinctive take on Sangiovese and a host of international varieties. As witnessed by these varieties, the region is one of the most interesting and diverse in all of Italy. 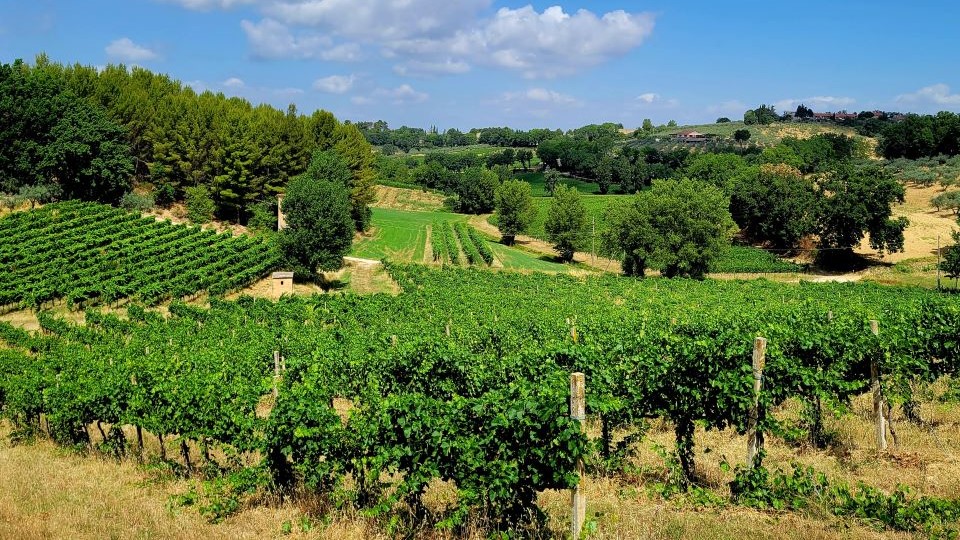 A Bit on the Geography

To understand the wines from Umbria, it is paramount to place importance on geography. While Umbria shares borders with Tuscany to the west, Marche to the east and Lazio to the south, it bears little similarities to any of these regions. The only possible exception is the extreme south, where Umbria meets Lazio. This is because the viticultural regions are engulfed by the Apennine mountains on all but one side, which creates a set of unique terroirs. Umbria is generally warm by day, as the Tiber River carries air currents from the Mediterranean. Still, it is drastically cool by night as strong winds blow in from the mountains. Umbria is on average drier than the surrounding regions, as the Apennines trap weather patterns from the Adriatic and Mediterranean Seas. The soils are rich in clay with a mix of sand and limestone giving way to clay-calcrete, an almost-cement-like blend of clay, gravel, sand and silt at higher elevations. Yet along the western and southern borders, where Orvieto is king, vines dig deep into a hard mineral-rich clay of volcanic origins. Here the weather is moderated by the sheer size of lakes Corbara and Trasimeno. 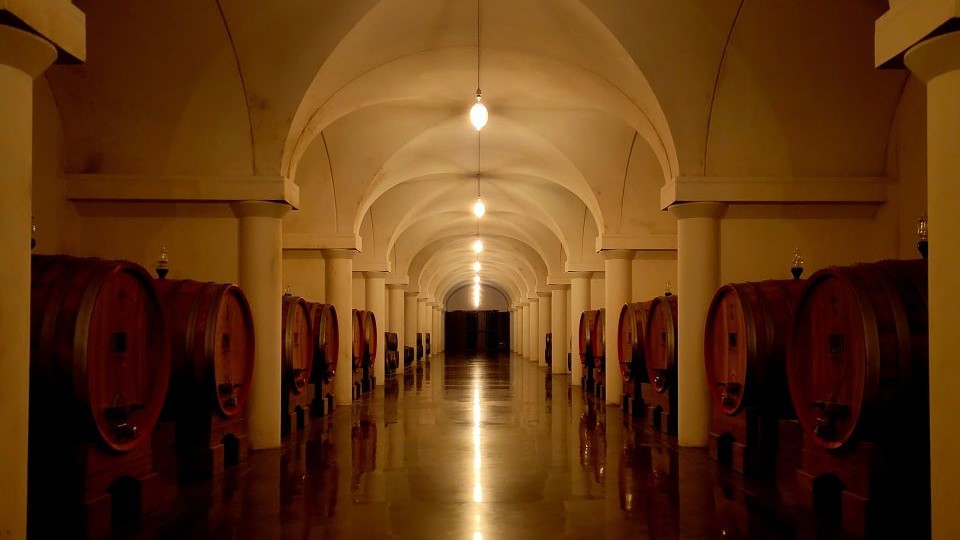 Barrel aging in the Tabarrini cellars.

Umbrian Reds Are Coming of Age

While Umbria’s initial renown was built on Orvieto, the region’s future is in the emergence and growing quality levels of their top two red varieties: Sagrantino and Sangiovese. The latter may come as a surprise to some readers. The reality is that Umbria has a long history with Sangiovese, both through the Montefalco Rosso DOC and Torgiano Rosso DOCG (both have a Riserva category that requires longer aging before release). It’s important to mention that neither of these appellations allow for a 100% varietal Sangiovese. Montefalco Rosso requires 60-80% Sangiovese, 10-25% Sagrantino and 15-30% other authorized grapes, which tend to include Montepulciano, Merlot and Cabernet, while Torgiano Rosso blends 50-70% Sangiovese with 15-30% Canaiolo and 0-10% Ciliegiolo or Montepulciano. In an age where more and more regions are focusing on varietal Sangiovese, the blending regulations of these two categories set them apart. While the relatively open-ended blending rules mean that the styles of each wine can vary from producer to producer, they still maintain the unique stamp that makes them truly Umbrian. The Montefalco Rosso DOC takes on its distinctive individuality by adding Sagrantino, which nearly all producers use to the best effect, often smoothed out by some plumb Montepulciano or Merlot fruit. Frankly stated, some of the best values in high-quality Italian red wine exist within these two categories. As for varietal Sangiovese, they are usually found under the IGT Umbria Rosso appellation.

This brings us to Umbria’s other big red, the wine that truly defines the region: Sagrantino. While plantings of Sagrantino are starting to pop up around the world, including Australia of all places, the variety finds its ideal home in Umbria. Readers are sure to have heard about Sagrantino’s aggressive tannins and high levels of polyphenols (twice the amount of the dark and structured Cabernet Sauvignon). This thick-skinned, small-berried variety needs the warmth of Umbria to mature, but also the strong diurnal shifts at night to help balance so that at the end of the season, fruit can reach perfect physiological ripeness. Achieving this is paramount to producers hoping to tame the aggressive tannins of the variety, but with the tradeoff of elevated alcohol levels. In my recent tastings, it wasn’t rare to find bottles at 16-16.5% abv, which places Sagrantino next to Amarone, another high-octane Italian red. The difference is that Sagrantino’s acidity levels tend to smooth the effect of the alcohol on the palate, providing a deceptively more balanced feel than you would expect.

Tannin management can make one Sagrantino excel over another. Historically, Sagrantino was a sacramental wine first created as a passito-style red using air-dried grapes to produce a bittersweet, glycerol elixir that was treasured throughout the region. Its opulent fruit would nearly mask its tannins, and the wines could hold up for decades. To this day, the opportunity to taste a Sagrantino Passito from producers like Scacciadiavoli, Paolo Bea, Antonelli San Marco, Arnaldo Caprai, Tenuta Col Falco or Adanti should never be passed up. However, as Sagrantino evolved into a dry wine, taming the tannins became one of the biggest mysteries, and this is the key issue that has held the variety back over the past few decades. Over the years, producers have tried to mellow Sagrantino’s structure through clonal selection, farming, macerations, selected yeasts and French oak. The latter is a useful tool in the hands of some of Umbria’s top winemakers (Arnaldo Caprai comes to mind) but can add insult to injury in less capable hands. The good news (as I alluded to at the beginning of this article) is that the time and effort spent to better understand Sagrantino and its tannins now bear some highly pleasurable wines. Tasting with Giampaolo Tabarrini in his new carbon-neutral facility was an eye-opening experience. We sampled Sagrantino directly from tank and barrel, which didn’t sear the tongue nor shut down the palate. Paolo Bea has been another standout for years. Their wines macerate far longer than anyone would expect, and they rest in large neutral oak barrels for an extended period, only to emerge as structured yet harmonious. Each year, the list of names finding balance within their Montefalco Sagrantino grows. In the past, Sagrantino was marketed as one of Italy’s great, long-lived reds, yet collectors were scared to explore it in fear of nearly painful tasting experiences, no matter how long they were matured. Those days may be behind us. 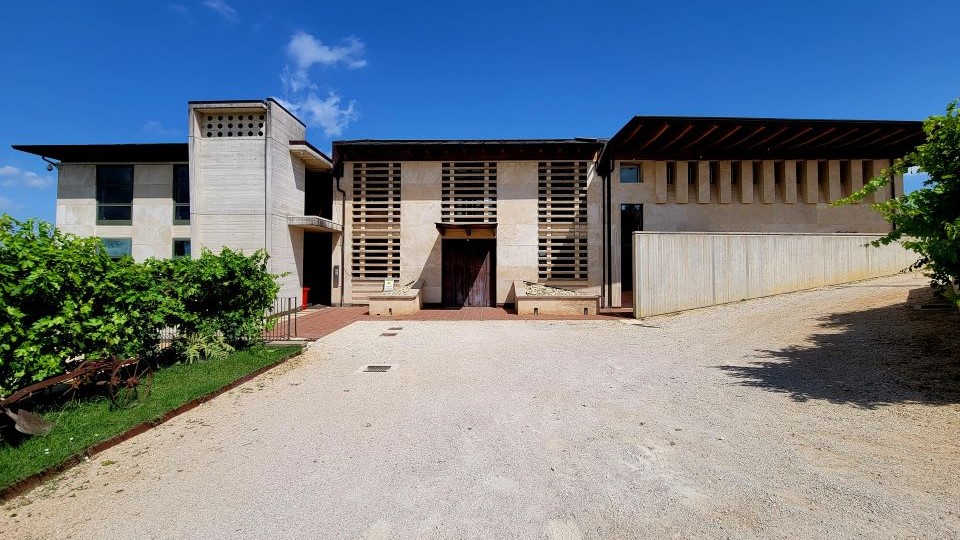 Orvieto is located in the west and south of Umbria and partially shared with Lazio. This is the region's largest appellation and most widely known, but also its most variable. Considering the high level of Orvieto wines submitted by just a handful of producers, it’s difficult to understand why the region can’t uniformly produce world-class wines. Part of the problem appears to be a lack of inspiration to improve, as much of the region's wines are soaked up within the Italian market as easy-drinking whites with a famous branding “Orvieto”. Overproduction, cutting corners and overuse of international varieties can easily strip the wines of their depth and regional character, as blending regulations permit 40-100% Grechetto, 20-40% Procanico (Trebbiano Toscano) and 20-40% other grapes, which can mean Chardonnay and Sauvignon Blanc. One can see how easy it would be to get lost in a sea of Orvieto of varying quality and styles.

However, the best of Orvieto does warrant readers' attention. When balance is obtained and the quality of fruit is high, the wines are both easily likable in their youth and able to mature for up to a decade. Especially in the Classico zone, Orvieto wines can achieve a healthy onset of noble rot (Botrytis cinerea) due to its proximity to Lake Corbara and the Tiber and Paglia rivers. The smoky and textural notes brought into the picture through botrytis can add unexpected depths to dry wines or be used to create the region's famous sweet wine, Muffa Nobile. 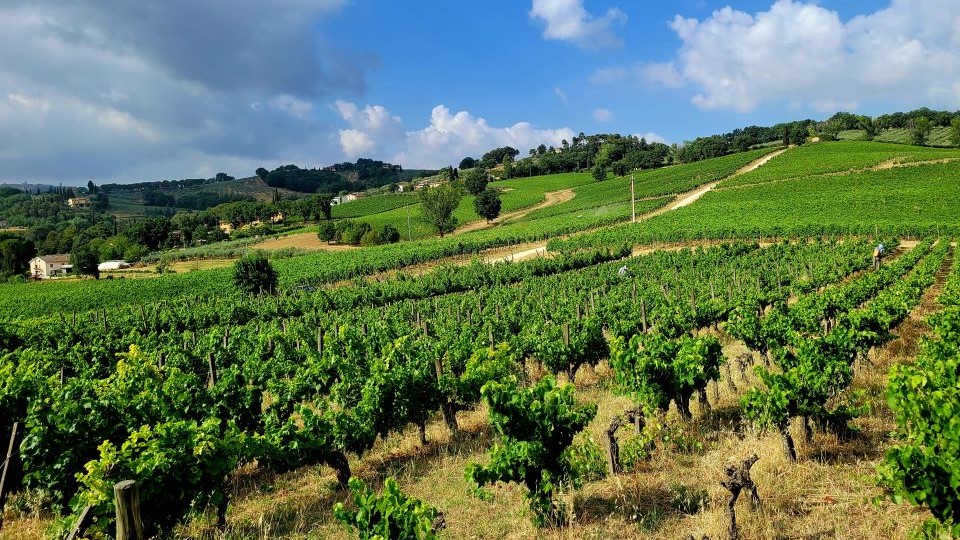 The vineyards of Arnaldo Caprai.

The Most Recent Vintages

While it’s a bit too early to talk about 2021, as we only have fresh whites to look at, the 2020 vintage is presented in the form of young Montefalco Rosso and Trebbiano Spoletino. This was a balanced year throughout much of the season with a warm spring and hot and dry summer, yet in Montefalco fashion, the nighttime cooling temperatures maintained balance. Late September rains created problems for the later-ripening varieties: Sagrantino and Trebbiano Spoletino. It was necessary to be timely and prudent to avoid rot amongst the vines. From what I’ve tasted, the whites are highly pleasurable yet lack depth. The early reds are often easy-going or have angular tannins that don’t feel quite ripe, possibly due to picking early.

The 2019 reds that have just been released, mostly Montefalco Rosso, are pretty exciting. These are rich and supple wines with the balance to warrant cellaring. The vintage resulted from a cool and rainy spring that delayed flowering and fruit set. However, conditions improved toward the end of May, with dry and warm weather, while the built-up water reserves in the soils from spring rains kept the vines healthy for the hot summer months. Ideal conditions through harvest presented growers with healthy fruit into harvest. I cannot wait to taste the Sagrantinos when they are released.

The challenging 2018 vintage, in most cases, shows in the Sagrantinos subdued fruit profiles and lack of thrust. This was a vintage with a cool start that then turned warm and, at times, rainy through the summer months. Severe selection in the vineyards was necessary to find balance in the wines. The 2018s should be enjoyable much sooner than most readers would expect. In the meantime, there are plenty of 2016s, a classic year, and 2017s, a rich and powerful year, on the market for collectors to chase.

All of the wines from the article were tasted in Montefalco during the summer of 2022 and in our offices in New York through the fall of 2022.