I think we all remember a time when the Italian white on the tip of everyone’s tongue, from the fanciest of restaurants to the coziest of trattorias, was Pinot Grigio. However, so much has changed since then. Granted, it’s taken Italian whites much longer to be seen seriously than it has with Italian reds. This should come as no surprise, given that Trebbiano (and the ocean of varieties that are similarly named or mistaken as Trebbiano) remains the most widely planted grape in the country.

Fortunately, more and more winemakers are now looking to the indigenous whites of their regions, some of which have been saved from the brink of extinction. These days we talk about the true Trebbiano grape and what it can accomplish in the right hands. We also hear about Carricante, and how it may be Italy’s next great Italian white variety. There is also Fiano, which has already proven its worth over the course of decades.

However, there is one Italian white grape that I believe has yet to get the full attention it deserves. It’s a variety that can be produced in a young and remarkably fresh style to pair with the warmest of summer days and light cuisine. It’s also capable of producing a much more serious wine with the potential to mature for upwards of a decade. It even succeeds when harvested late, lending textural depths and ripeness that balances wonderfully against the variety’s naturally high acidity. Oak? It can handle that too, while still communicating varietal purity. The fact is, it may be the most versatile of all of Italy’s white grapes.

The grape is, of course, Verdicchio. If you haven’t already delved into its multifaceted expressions - or enjoyed a mature bottle - then you’re missing out. The good news is that it’s not too late to start exploring now, nor will it break the bank.

Verdicchio’s home is Le Marche, where we find two Denominazione di Origine Controllata (DOC) appellations, Verdicchio dei Castelli di Jesi and Verdicchio di Matelica, along with DOCG Riserva status for wines aged eighteen months prior to release. While it’s also been proven that Verdicchio is the same variety as Trebbiano di Soave, as well as a host of other varietal names throughout the Veneto, it’s in the Marche that producers have been hard at work to bring Verdicchio to the world’s stage. Better farming practices, identifying the best clones to use in the right locations, single-vineyard expressions and modernization within the wineries are just a few of the reasons we’ve witnessed a surge in quality. 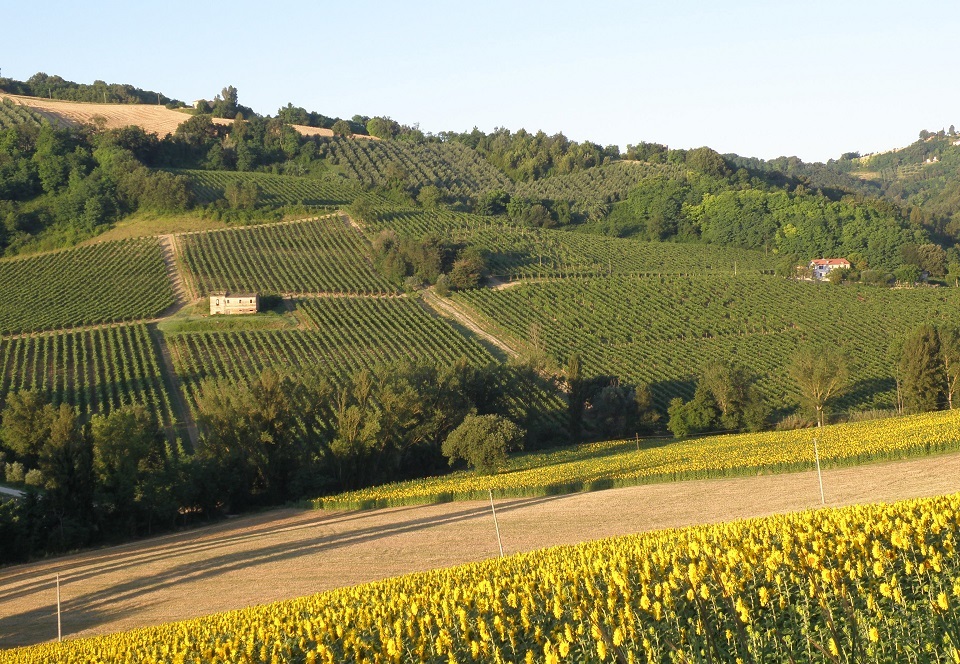 The Balciana Vineyard of Sartarelli, where a combination of northeastern exposures and elevation of 300 meters creates cool exposition, allowing the grapes to enjoy an extended growing season and the healthy onset of noble rot.

So, Why Aren’t We All Drinking and Cellaring Verdicchio?

In my opinion, Verdicchio fell victim to its own marketing. Granted, at the time, in the 1960s and 1970s, it made all the sense in the world to market the region's wines to the masses as an easy-drinking quaffer that’s crisp, delicate and pairs perfectly with fish. To make matters worse, the wines were packaged in fish and amphora-shaped bottles. This might work for the supermarket consumer trying to decide which wine to match with the seafood they planned on cooking up that night, but it certainly didn’t communicate that the wine within might be something special and age-worthy. At the time, it also worked well for producers who were able to focus on quantity over quality, while still turning out wines that were crisp, fresh and, surprisingly, in spite of farming practices, full of character.

Speaking of character, there does seem to be something decidedly green about Verdicchio (taking part of its name from the word “Verde”), but that’s not meant as a negative connotation. Verdicchio has a notable green hue within its straw yellow color, as well as aromas and flavors that often bring green citrus, apple and melon to mind. You’re sure to find well-defined minerality as well, which is a perfect pairing with the grape’s vibrant acids. However, if there is one flavor profile that nearly any producer will associate with the variety, it’s almond, which can be a bit bitter in a Verdiccho’s youth, while sweetening over time. Granted, these are generalizations. Understanding that the two Verdicchio DOCs within the Marche region are markedly different is also important. 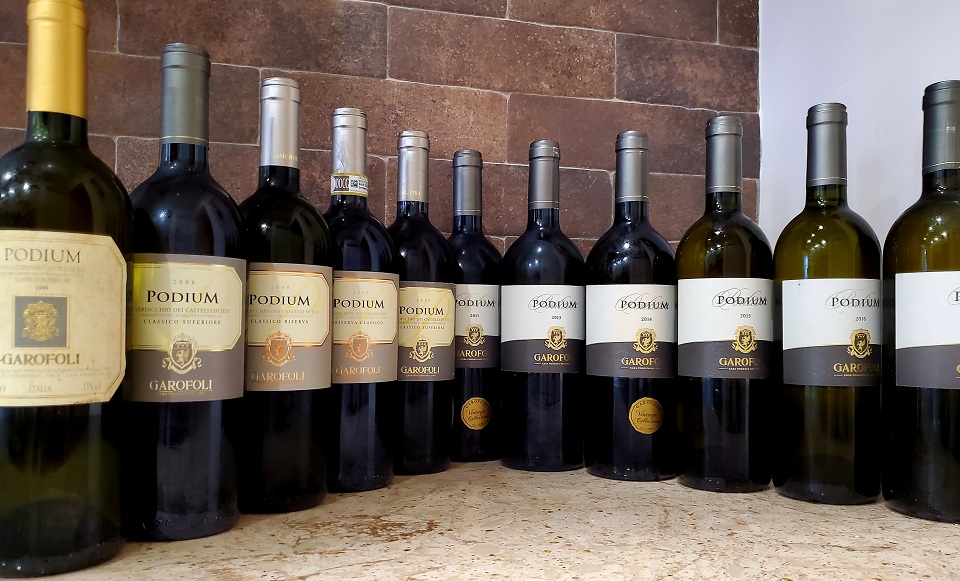 An eleven-vintage Garofoli Podium vertical displayed Verdicchio’s staying power, even without any use of oak barrels in the winemaking process.

The Difference a DOC Can Make

The significantly larger DOC (more than 10 times the size) of Verdicchio dei Castelli di Jesi is spread out along the gentle hills on either side of the Esino river, west of Jesi. In many cases, these vineyards are no more than twenty miles from the Adriatic coast and its moderating influences. The soils are also rich in minerals, mixed with clay and limestone. For the longest time, it was believed that Jesi produced lighter and more floral wines, better for young, fruity and easy-drinking styles. That stereotype no longer applies. A move toward better understanding the different terroirs found throughout the region and the creation of single-vineyard wines has helped to show what Jesi is capable of. A good example is the cooler microclimate of the amphitheater of vines that are used to create the Sartarelli Balciana. Within its confines, the Sartarelli family are able to take advantage of the development of botrytis, which lends the wine much of its exotic character. Another example is the weight and power that can be culled from vineyards surrounding the Town of Montecarotto. The Garofoli family has shown what the terroir of Montecarotto is capable of with their flagship wine, Podium. So, while you can generalize that the wines of Jesi show more pliancy and roundness, they are indeed capable of creating powerful, complex and age-worthy expressions.

Then there is Verdicchio di Matelica, which is further inland, closer to the border of Umbria and located southwest of Jesi. Here, Verdicchio grows at higher elevations, starting at 400 meters above sea level in the Apennine basin. These sloping vineyards run east to west throughout the valley and receive cooling mountain influences, which results in a longer-than-average growing season. Winters are colder and summers are warmer, yet the wide day-night temperature variations help to develop more depth and character in the wines. When you add this all together, it sounds like a recipe for a “better” wine, yet I implore you not to jump to that conclusion. That said, if your tastes veer more toward structured, firmer, minerally-intense and higher-acidity Verdicchio, then Matelica is certainly for you. Two excellent examples from the region are Bisci and Collestefano. In both cases the wines are structured, overbrimming with energy and remarkably pure. 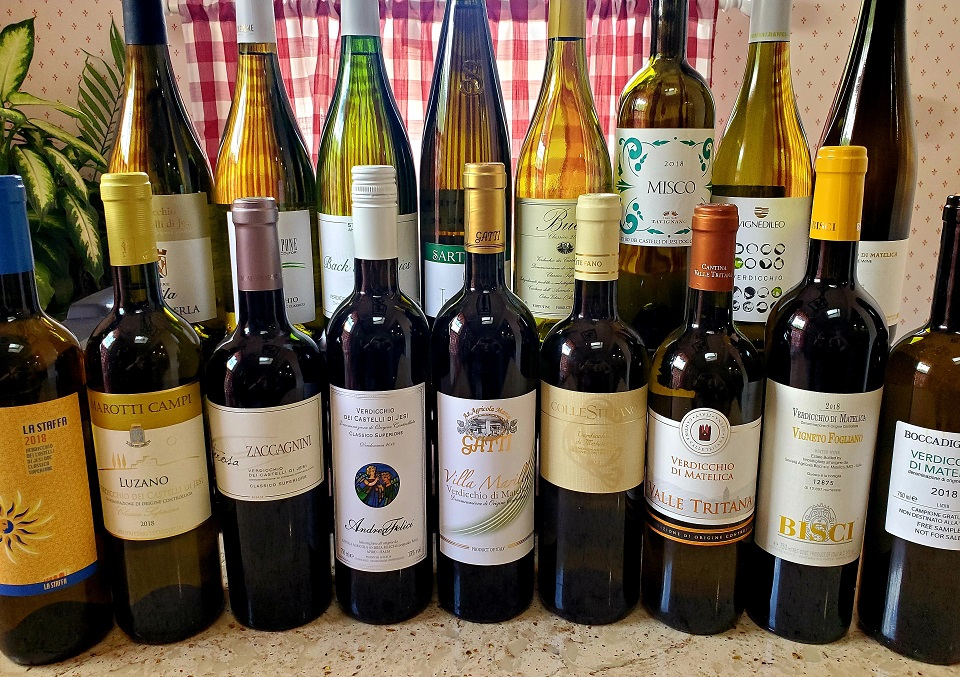 A Bit About Vintages in the Market

The young 2019s are just coming into the market now. The winter was extremely cold and dry, yet it was followed by a mild spring that brought above-average rainfall through April and May. Both budding and flowering were delayed. Much warmer temperatures prevailed throughout the summer months, which saw three major heat waves and more rain. That resulted in a high amount of humidity but also a good supply of water to help the vines through the heat. September brought some relief with good day-to-night temperature shifts, yet this was followed by much warmer weather, which then accelerated ripening. Harvest was later than usual and took place with sporadic rains, which slowed progress.

The 2018 vintage in Marche was one of the most balanced in recent years. A cold winter gave way to moderate temperatures throughout the spring, along with an average amount of rainfall. The summer was warm and brought a number of heavy rain events, but without hail or any major heat spikes. Although harvest was generally earlier than normal (one week on average), the fruit was healthy and perfectly mature. The best part is that you don’t need to wait for the Riservas to be released if you want to put some 2018s in the cellar, as even the Superiore category showed tremendous potential. Of note were selections from Sartarelli, Tavignano, Bisci and Collestefano.

Like much of Italy, Marche suffered through an extremely warm and dry growing season in 2017. This, coupled with a damaging spring frost earlier in the year, resulted in seriously reduced yields. However, while alcohol levels are generally up, and textures are often verging on oily, most wines still show a good balance of structure and bright acidity. I’ve been happily surprised by many of the 2017s I have recently tasted.

Although I only tasted a small selection of 2016s for this report, I believe it’s a vintage worth talking about. In 2016, the combination of cooler-than-average temperatures, as well as a large amount of rain, convinced producers to pick later than usual in hopes of achieving ideal ripeness. In the case of a number of Riservas, this resulted in wines of incredible depth, high acidity and length. Of note were selections from Casalfarneto, Bucci and La Staffa, all of which I believe will perform quite well over the next decade.

All wines in this article were tasted in New York City between July and August 2020.

The Grand Vin of the North: The Past, Present and Future of San Leonardo, Eric Guido, July 2020