The Unrealized Potential of Marche

Marche is best described as a cascading series of foothills and river valleys that begin along the spine of the Apennines and steadily descend toward the coast of the Adriatic Sea. However, Marche is also so much more than that. Mountains or coastlines are visible from nearly any vantage point. In all those locations, hills are drastically steeper than expected. To the south, we reach Abruzzo and the higher elevations of Colline Teramane, where we find the likes of Emidio Pepe and his world-class wines across the border. To the west, the mountains connect Marche to Lazio, Umbria and Tuscany, while providing cooling air currents that balance the warm Mediterranean days. Finally, to the north, Romagna is celebrating a Sangiovese renaissance. That begs the question: What is holding Marche back from making world-class wines? 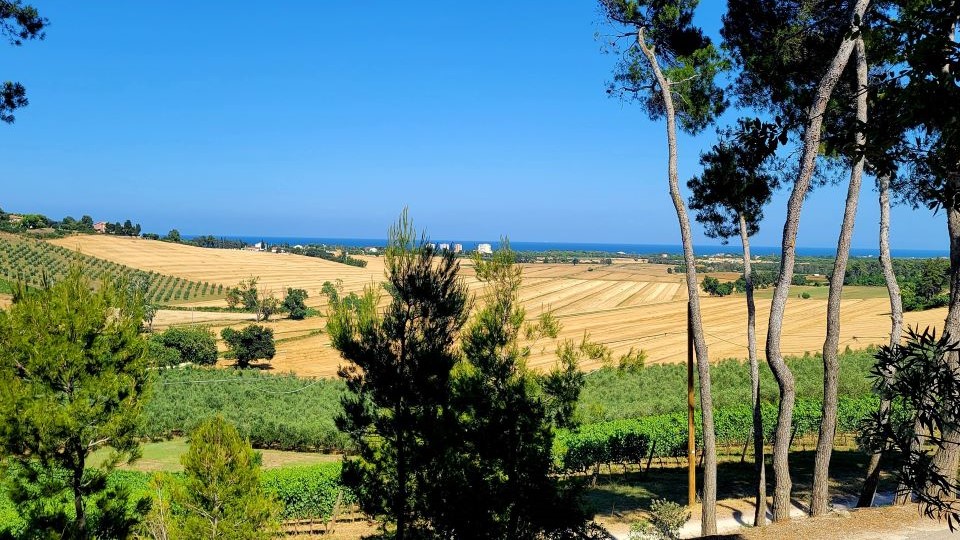 Looking east from Le Terrazze with the Adriatic coast in sight.

To this day, with the exception of a small number of red wine producers, Marche’s renown is sustained by the continued success of Verdicchio from both the Verdicchio dei Castelli di Jesi Classico and Verdicchio di Matelica DOCs. Considering the mirror image of mountains to coastlines that the region shares with its neighbor in Tuscany, the success of Montepulciano to the south and Sangiovese to the north, it’s easy to assume that Marche should excel with reds. In the Rosso Conero DOC and Conero Riserva DOCG located on the coast, east of Jesi, we find what many consider to be the region's best hope of producing high-profile wines. The clay-limestone-rich soils, higher-elevation vineyards around Monte Conero and the Mediterranean climate make this a perfect location for the Montepulciano grape, which can be blended up to 15% with Sangiovese. This is also the northernmost location in Italy that can produce Montepulciano. (It is here that Antonio and Georgina Terni of Le Terrazze have mastered the production of international varieties such as Merlot, Syrah and even Chardonnay.) Besides a short list of standouts, such as Le Terrazze, Umani Ronchi, Garofoli, Malacari and Moroder, there are very few Rosso Conero wines that warrant readers’ attention. In other words, the potential is there; producers just need to take advantage of it.

The same can be said about much of the larger Rosso Piceno DOC. The growing area for Rosso Piceno extends from the southern tip of Marche up past Jesi, allowing for 35–70% Montepulciano and 30–50% Sangiovese (along with 15% other red varieties). While Rosso Piceno can often be depended on for slurpable, value-oriented wines, it’s also within this region that we encounter Oasi degli Angeli and their Kurni, one of the region's top cult reds year after year. Then there is the Offida DOCG which was separated from the Rosso Piceno DOC in the south of the region just twenty years ago and has been trying to prove its worth with Montepulciano-based reds, along with some very interesting Pecorino. Producers CIU' CIU' and Poderi San Lazzaro are worth checking out. Finally, the Lacrima di Morro d’Alba DOC is located on the Adriatic coast north of Jesi. While most consumers associate Lacrima with easy-drinking, violet-tinged and fruit-forward reds, I see considerable potential in the variety. Check out the old-vine Mariasole from Lucchetti. I long for the day that a tasting of Marche reds leaves me feeling impressed instead of just looking to a few producers that really shine amidst a sea of averageness.

Even though Marche’s red wines have not risen to the occasion as a whole, it would be a shame not to check out the producers who surpass expectations. The wineries mentioned in the previous paragraphs have been hard at work to prove the potential of the region. In many cases, their wines also represent tremendous value for consumers. 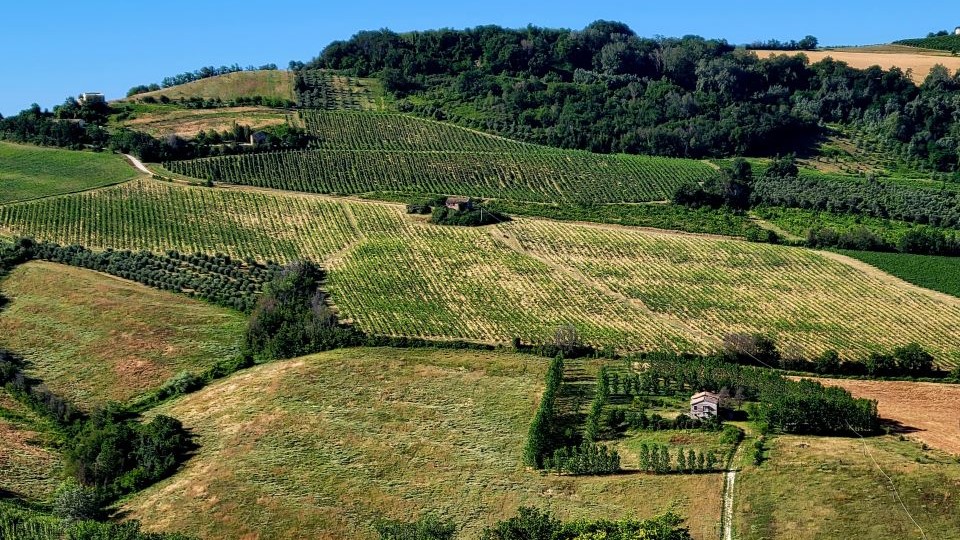 Looking out across the hills of Verdicchio dei Castelli di Jesi.

Verdicchio has never been more exciting than it is today. Benchmark producers continue to raise the bar; every year, overall quality increases. As I mentioned previously, it’s difficult to grasp what the actual landscape of the region is really like, as the hills of Verdicchio dei Castelli di Jesi are much steeper than one might expect, the Adriatic Sea is much closer, and the ventilating winds from the mountains and the north are a constant. When we add in the varied exposures and sedimentary soils rich in limestone and clay, the result is an ideal location for Verdicchio.

One of the things holding Verdicchio back is also what makes it one of Italy’s great wines: its aging capacity. In their youth, Verdicchios are very appealing up front, full of energy, a bit wiry and the perfect pairing for just about any kind of seafood or white meat on a summer day. Still, these attributes don’t always communicate true potential. As a result, most Verdicchio is consumed long before the real magic starts to happen, when wines gain in volume and depth over five to eight years, taking on richer personas as notes of almond paste and ripe, green-tinged fruits are perfectly offset by the grapes’ inherent high acidity and minerality. When compared to the short list of other Italian white varieties that communicate such importance through aging, such as Trebbiano Abruzzese, Carricante and Fiano, the price for the average bottle of Verdicchio is often an unbelievable value.

As a rule of thumb, most producers offer three tiers of Verdicchio. The first is an easy-drinking, young wine that’s treasured for its piercing acidity mixed with vividly ripe fruit. The second will be a later-harvest or single-vineyard wine where the grapes mature slower, communicating more depth and power. Finally, the third, a late-harvest (but not sweet) Riserva that is sometimes elevated by a healthy onset of noble rot. As for winemaking, cement and neutral aging vessels are producers' first choices. That said, there’s still plenty of oak to be found, yet it’s an ingredient that Verdicchio can handle but doesn't necessarily need. One producer that has excelled with oak aging is Bucci. Their Verdicchio dei Castelli di Jesi Riserva Classico Villa Bucci remains a benchmark for the region. Hardcore Verdicchio fans will want to seek out the Metodo Classico (Champagne method) wines. I am seeing more and more of these throughout my travels. A recent visit to Garofoli included tasting several back-vintage Metodo Classico Verdicchio that was head-turning, to say the least. As for dessert-style Verdicchio, this is one category that I see as more of a fun curiosity than a style to hunt for. While the grape’s acidity lends well to Passito-style or late-harvest wines, its aromatics don’t take the wines to the next level. 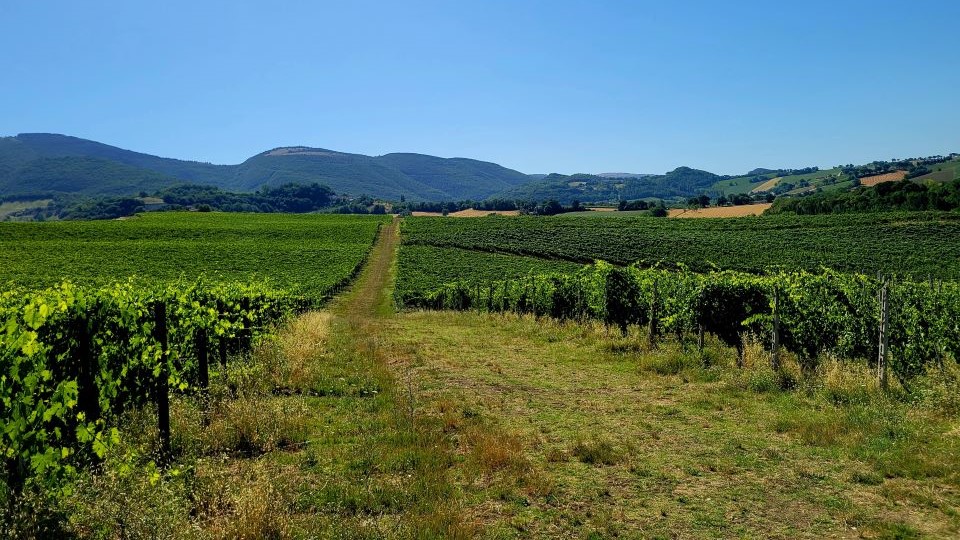 The sprawling Verdicchio vineyards in Matelica.

I think of Matelica and Jesi the same way I think of Barolo and Barbaresco; they both produce the exact mono-varietal wine but create two different expressions through differences in terroir. While driving into Matelica, it becomes apparent quite quickly how drastically different this region is from all other growing zones of Verdicchio in Marche. While Jesi spreads out from a spine of mountains and then gently slopes down toward the Adriatic Sea, Matelica is situated on the other side of that spine of mountains, sitting in a valley lined with Apennine outcroppings to the east and west. This geographical situation changes climate significantly, giving Matelica producers a continental climate with drastic diurnal shifts and a season lasting from seven to ten days longer than their neighbors in Jesi. A mix of clay and limestone soils and elevations above 370 meters make it easy to see why a bottle of Matelica Verdicchio is so deep, characterful, structured and bursting with minerality.

It’s a matter of preference to decide which of the two growing areas is the more important over the other or yields better wines. Still, generalizations exist; Jesi is more fruit- and texture-driven, while Matelica is more linear, mineral and intense. 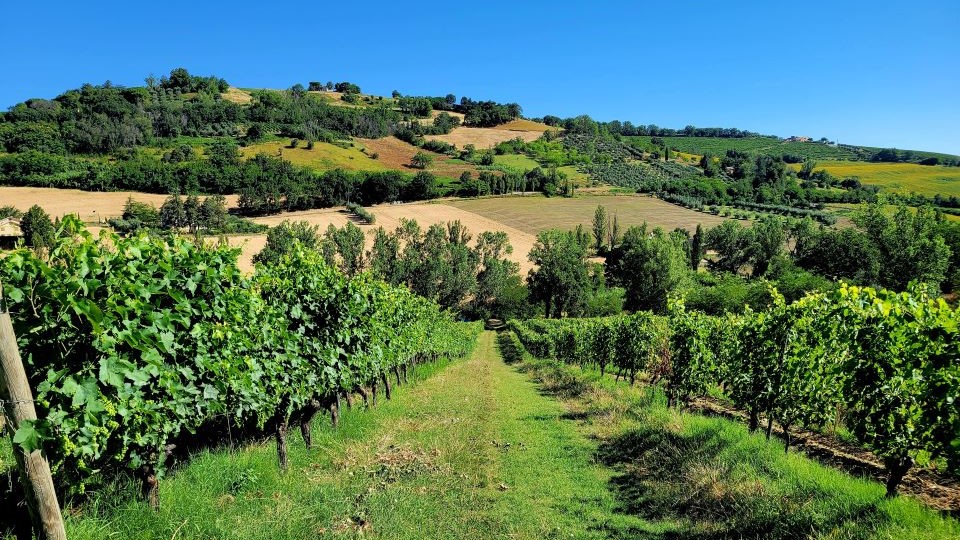 Within the Balciana vineyard of Sartarelli.

What’s in a Vintage?

The newly released 2021s from Marche are on the edge, with ripe fruit and opulent textures, yet often lacking acidity to balance. Expect young Verdicchios and Montepulcianos with immediate appeal, but not the staying power usually associated with these varieties. The vintage got off to a good start with the help of accumulated water from the winter months. Unfortunately, a lack of rain throughout the spring resulted in drought conditions that became a concern. Coupled with the onset of warmer temperatures from late spring through the summer, many vines went into hydric stress. The Verdicchio harvest began ten days early on average. Berries were dehydrated and thick-skinned. As for Montepulciano, while harvest was early as well, the variety benefitted more from the September rains and cooler temperatures.

Still, rains in September helped restore a measure of balance and led to higher yields than 2020. As for Montepulciano, while harvest was early, the variety profited more from the September rains and cooler temperatures. I don’t expect them to show the depth or have the staying power of better vintages.

The 2020s continue to impress now that the single-vineyard selections and Superiores are in the market. Cooler weather and much-needed rain in March followed a dry winter with above-average temperatures. While the summer months were warm, there weren’t any significant heat spikes. Coupled with the region's well-ventilated climate, this created an extremely healthy environment for the vines and resulted in a long growing season. The risk of disease was low, and ripening progressed evenly through harvest. The 2020s are a total pleasure to taste today but also have the balance to evolve beautifully over the coming five to eight years. As for the 2019s, I’m finding more balance and depth in the Riserva-level wines than expected. This small vintage, with production down by as much as 50%, is the result of a turbulent spring that led to uneven budding and flowering, followed by a hot summer with multiple heat waves and a warm September. Granted, the saving grace of these late-release wines is likely the later harvest that allowed them to regain some balance on the vines through October and even November. The 2019 vintage will remain an odd mix of failures and successes, even within a single producer's portfolio. The reds continue to impress, marrying warm vintage character with tremendous energy, concentration and sweet tannins.

I tasted the wines for this article in Italy in the summer of 2022 and in our New York offices through September.