More often than not, a consumer or lover of wine will think of something Tuscan when they associate a style or profile with what they like about Italian wine. For collectors, our thoughts often turn to Piedmont and Barolo, but that’s more of a modern trend than most people realize. Once you look past Nebbiolo-based wines and their rise in popularity, you’re left with Tuscany, with its Super Tuscans and Brunello di Montalcino. While many of the original Super Tuscans that brought the collector market to Italy were not based on Sangiovese, today that has changed as well, and of course, Montalcino has always relied on its most prized variety, Sangiovese Grosso.

However, the broader population of consumers and wine lovers who grew up on Tuscan Sangiovese did so with some form of Chianti. In fact, most Barolo drinkers I know will quickly offer up that their second love after Nebbiolo is Sangiovese, and there’s a good reason for that. The majority of us cut our wine teeth on Chianti, going back decades to the pizza parlors that poured them from straw-wrapped fiaschi, along with the many nostalgic memories we have of those same fiaschi being refashioned into candle holders and vases. If you found yourself cruising the aisles of a wine or liquor store in the ‘70s, ‘80s or ‘90s, looking for an easy-drinking Italian red, would it really have been anything other than a Tuscan Sangiovese? 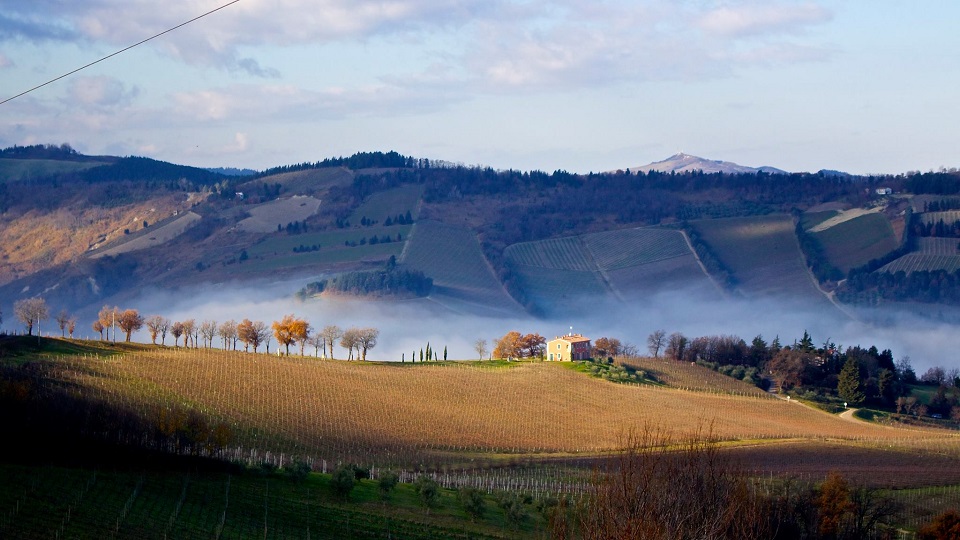 Chiara Condello's Romagna Predappio vineyards in the foothills of the Apennines.

The problem is that those same wines that imprinted themselves on us for all of those years have, as they’ve gotten better, also gotten more expensive and harder to track down. Don’t get me wrong; there’s still plenty of $10–$15 Chianti on the market, but the best of the best, the pioneering producers and the wines that speak of place before speaking of large production and winemaking, are much harder to obtain.

However, there is an answer, and one that too few of us have explored.

Chianti, Brunello and Vino Nobile are just the tip of the Sangiovese iceberg, not only in Tuscany, but also in Italy. In fact, many will argue to this day that Sangiovese originated in Romagna before Tuscany. What’s more, the regions of Le Marche and Umbria, though separated by a spine of mountains from the Tuscan countryside, have for centuries taken very seriously the production of Sangiovese, both pure and blended with other varieties. Granted, these regions may have lagged behind the quality surge that Tuscany witnessed through the last 30 years, but that has changed quite a bit in the last decade. Today, location matters, farming practices continue to improve, cellars are cleaner, and the overuse of new oak is on the decline. What’s the result? In my opinion, it’s a whole new Italian Renaissance, but this time for Sangiovese and what I’ve come to know as the Sangiovese Belt. 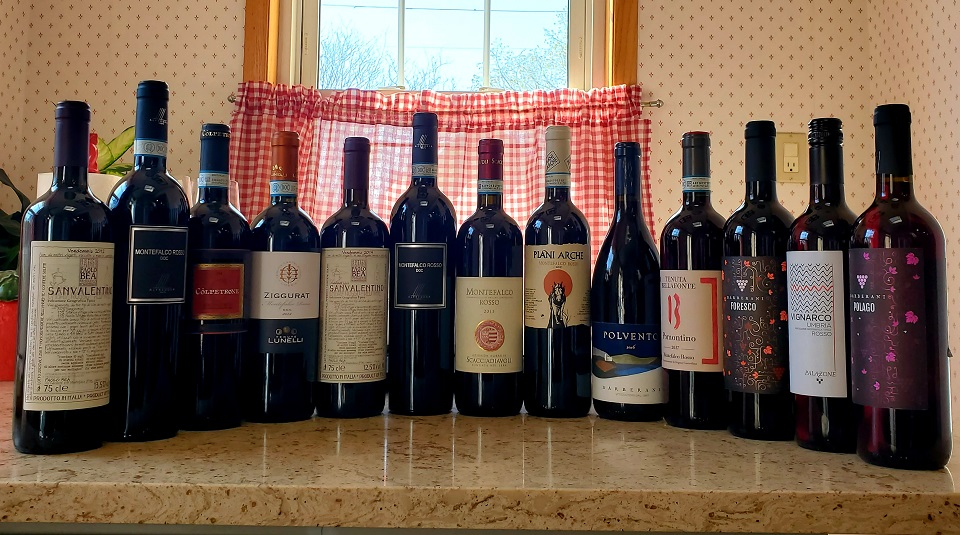 So, what makes central Italy so special and so perfectly suited to Sangiovese?

The pleasure that both winemakers and consumers take from Sangiovese has prompted many experiments around the world. One of the most notable is being led by the Antinori family in California, where Piero Antinori sought out a high-elevation, mountainside location at Atlas Peak and started Antica. For years, the family worked to prove that Sangiovese could be the next big thing in California, yet in the end, it simply didn’t work. Today you can find a small number of boutique Sangiovese producers throughout California, Oregon and Washington State, but the successful ones are the producers who stopped trying to make Italian-style Sangiovese and instead allowed their own terroir to create something unique.

Many believe that the reason Sangiovese works so well in central Italy, yet in few other places, is the unique blend of continental and Mediterranean climates. On one side, you have the Tyrrhenian Sea, and on the other, the Adriatic, both Mediterranean influences. At the core, you have the Apennines, where the climate turns more toward the continental. Of all the regions that make up central Italy, only Umbria is landlocked, yet even there, they take advantage of the elevation and large bodies of water that regulate their climate. Go to the south, and the influences of Africa make it too hot; go to the north, and the cooling effects of the Alps make it too cold. In the end, the fickle Sangiovese grape finds its perfect home right in the middle of the Italian peninsula, and when I say that, I’m also referring to the rise of elevations as we move further from the coast. Many attempts to create successful Sangiovese-based growing zones nearer to the Tyrrhenian Sea have resulted in large-scale and often jammy wines, while as we look to the best wines of Chianti Classico and Montalcino, it’s the higher elevations that are finding the most success. I spoke in depth with Chiara Condello, one of Romagna’s rising stars, and she attributed the recent success of the region to producers identifying cooler expositions and higher elevations. This is a trend that we are witnessing throughout central Italy.

Tuscany, Le Marche, Romagna (of Emilia-Romagna), Umbria and, for the sake of some amazingly unique Sangiovese that was submitted, tasted and worth mentioning, Lazio – all of these regions were taken into account when I set out to explore the Sangiovese Belt. My goal was not to talk about the large villages of Tuscany that everyone already knows, but instead to shed light on lesser-known regions and estates producing Sangiovese that is worth your attention. A number of wines were submitted that were made up of other varieties from these areas, and I chose to include them as well because in the end, this is all about putting great wines, amazing values and unique experiences into the hands of our readers.

A short rundown of regions and standout locations follows. 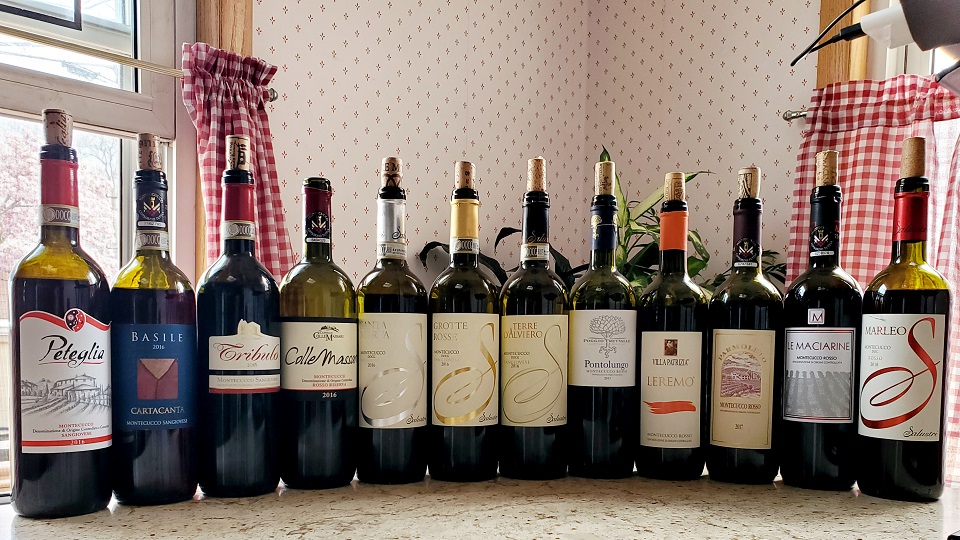 Chances are that this is where we all got our start with Italian wine, yet outside of the best-known appellations, the amount of Sangiovese that the average consumer is seeking out is quite small. One of the largest representations from my tastings that delivers amazing value is Montecucco. Located in the Maremma, between Montalcino and Scansano, Montecucco takes the best qualities of both locations and turns out something quite unique yet unmistakably Sangiovese. Here the influences of the Tyrrhenian Sea add a Mediterranean flair, while the higher-inland elevations (up to 500 meters) and proximity to Monte Amiata maintain balance of both temperature and precipitation. As of 2011, the Montecucco DOCG requires that Sangiovese make up at least 90% of any blend, and while many producers are choosing to use international varieties to fill in that final 10%, there is a strong movement to use only Italian varieties. Either way, the region and its wines are worth your time.

Sangiovese in Romagna has origins going as far back as that of Tuscany, and many believe before that as well. When you look at a map of Italy, Romagna (which is the southern and coastal portion of Emilia-Romagna) is somewhat like a mirror image of northern Tuscany, densely forested and separated only by a spine of mountains that bisect the east from the west. Looking at the Castelluccio winery in Modigliana provides a great deal of insight. At elevations that can rival those of Radda in Chianti, Castelluccio is the winery that Vittorio Fiore, of Poggio Scalette in Tuscany, invested in to prove the worth and importance of Sangiovese di Romagna. However, what has held the region back for decades is the amount of plump, juicy and less interesting Sangiovese produced from the plains closer to the Adriatic Sea. The good news is that today, that is all changing. Centered in the province of Forli, a new focus on terroir is emerging in Predappio, where we find Chiara Condello, who after only three vintages is already wowing Sangiovese lovers around the world. Here we are in the foothills of the Apennines, with sedimentary soils consisting of a unique formation of marine origin named spungone, made up of calcareous sandstone with large, porous seashells strewn throughout. The most interesting part is that these hillside vineyards have existed for decades; it simply took a new way of thinking to bring them to life. After 15 years of reading about the potential of Sangiovese in Romagna, I’m happy to report that today it has finally been realized within the region itself.

Running along the same latitude as Montalcino, Montepulciano and the southern reaches of Chianti Classico, with mountains to the west and the Adriatic to the east, are the larger Rosso Piceno DOC and the more-defined Rosso Conero DOC. Both of these have the raw potential to be great, yet have often fallen short. The reason for this, in my opinion, is the overuse of new wood to stylize and make the wines more alluring to international markets. Unfortunately for the region, tastes have changed, and it’s taken a long time for them to realize it. While Verdicchio rules the northern section of Le Marche, and does so with style, Sangiovese and Montepulciano are the kings of the south. Here we find limestone-rich soils and a climate that balances the cooling effect of river valleys that run down from the Apennines against the maritime influences of the Adriatic; and while the Montepulciano grape gets more attention from producers within both DOCs, Sangiovese often finds itself as a blending partner or a varietal wine. However, this brings up another important point about Le Marche, and that is how well-suited the region is to producing Montepulciano of remarkable character, depth, value and aging potential, especially in the Conero DOC. You just need to be picky if your preference is for varietal character over new oak. 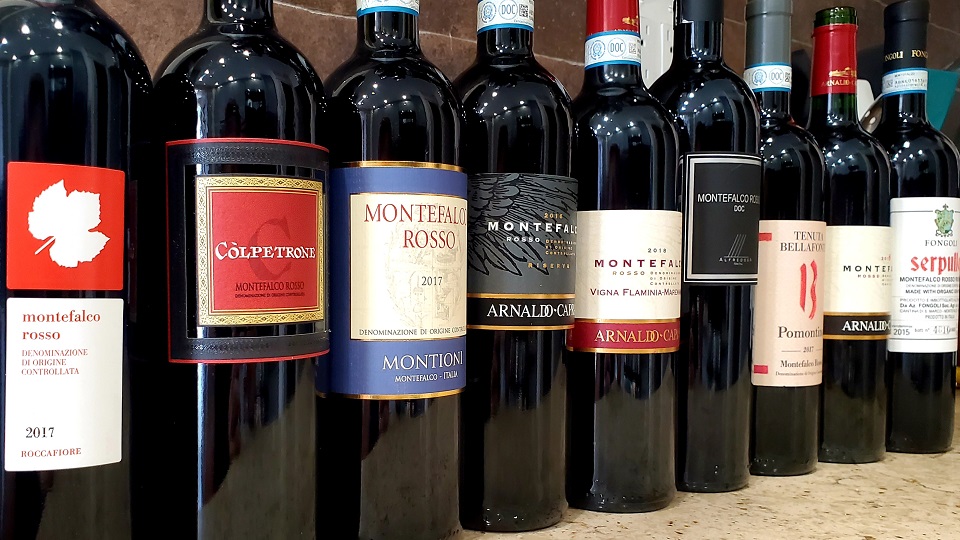 When you look at Umbria, it’s the big, brawny, structured Sagrantino that most people think of first, but the fact is that Sangiovese is just as important to the locals, and they are producing some pretty amazing wines. The DOCs of Montefalco and Montefalco Rosso allow the blending of Sangiovese with Sagrantino and a small portion of other varieties. Imagine taking the cherry-berry fruits, florals and nervous acidity of Sangiovese, and then adding the dark, brooding and powerful nature of Sagrantino. When done right, it’s a compelling mix. Montefalco sits in a basin, surrounded by the Apennines, where the soils are rich in clay with a mix of sand and limestone. However, as you push into higher elevations, rising up to 1,500 feet, you’ll also find clay-calcrete, an almost cement-like blend of clay, gravel, sand and silt that makes it difficult for vines to survive – but as they say, the strong always do. The region is warm yet moderated by winds coming down from the Apennines, along with Mediterranean influences carried across the Tiber River: in other words, the perfect location to make Sangiovese-based wines of tremendous character.

All wines were tasted in New York between April and June of 2020.