Abruzzo and Molise: More Than Meets the Eye

Looking east towards the Adriatic Sea, you breathe its warming breezes and think of the amazing coastal cuisine, perhaps matched by a juicy, citrusy and sage-tinged Pecorino. Some of the most famous pastas in Italy are made on these gentle sloping foothills, using the region's natural spring water and then slowly drying in that same salty sea air. Gazing out to the west, a gorgeous panorama of snow-capped peaks features Gran Sasso and Maiella, part of the spine of the Apennines. Their cooling influences, along with spicy mountain cuisine, burly, dark Montepulciano and some serious Trebbiano Abruzzese have long defined the territory. This is one of the most naturally beautiful places on earth.

I have been following the wines of Abruzzo and, to a lesser extent, Molise for a long time, but it easily goes back to the very beginning, when an inspiration for Italy’s regional cuisines spurred a love affair with the wines that pair well with them. The expression “what grows with it, goes with it” guided me on so many journeys, but none were so easy to both love and afford than the happy simplicities found in Montepulciano d’Abruzzo with Arrosticini (skewered and spiced sheep or lamb) or a crisp Trebbiano or Pecorino d’Abruzzo with a seaside town’s signature Brodetto di pesce.

With this journey also came a good amount of head-scratching confusion over why more of the wines couldn’t be better. I recall wondering why a $15 bottle would almost always deliver more depth and pleasure than a $50 bottle. And then there was the ocean of unpalatable wines in between. This inevitably led to looking elsewhere for whites and reds that would deliver the higher-level experience that I sought. Through it all, I never fully turned my back on Abruzzo and Molise, as I continued to taste regularly both in Italy and here in the United States. In the meantime, something began to take place right before my eyes. It was a slow and steady progression, in most cases created by a new generation of producers who were starting to look not just forward but also back. Driven by an interest in higher elevations, more complex soils, old forgotten vineyards and vines, respect for traditional practices, and a desire for purity, these growers have made Abruzzo and Molise some of Italy’s best regions for wines of outstanding quality and value. Although these producers remain in the minority, I have noticed that more widespread change is coming. 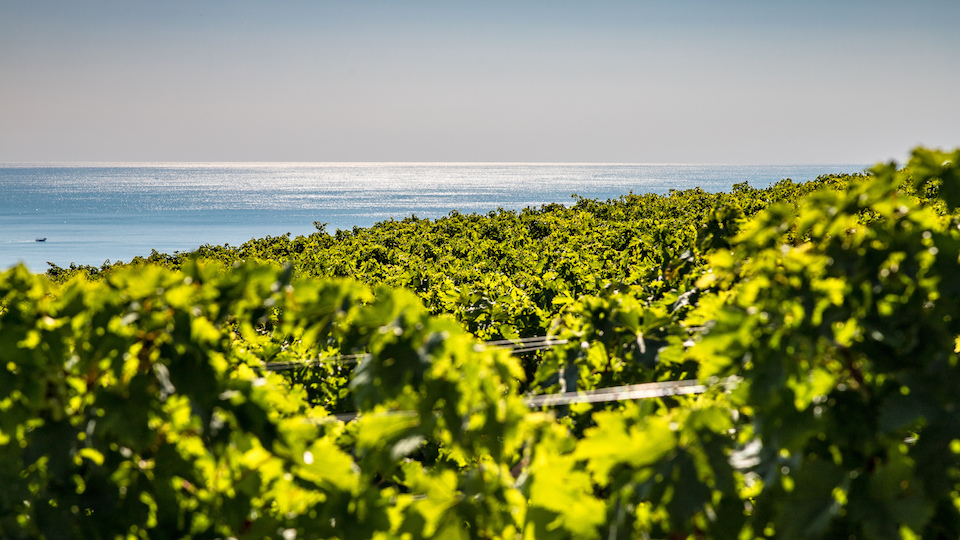 Peering out toward the Adriatic Sea from Terraviva.

A Bit of Housekeeping

Abruzzo and Molise are two separate regions. Prior to 1963, Molise was part of Abruzzo; yet still to this day, you will almost always find them lumped together whether it’s talking about wine, food or topography. Simply look at a map to understand why. Follow the Apennines down the western border and the Adriatic Sea down the east, and you’ll notice a natural connection between Abruzzo and Molise. To the north, the mountains are closest to the sea; these are Abruzzo’s top growing areas, at higher elevations and made up of gentle sloping valleys running west to east, lined with vineyards that receive sun from dawn till dusk. Here you’ll find Controguerra, Teramane, Pescara and Loreto Aprutino, which are home to many of the region's best producers. The further south you go, entering Chieti, the warmer and more fertile the land becomes. This is where you’ll find many of the large-scale cooperatives. The higher elevations move further inland, yet you’d be hard pressed to notice a change as you find yourself in the alluvial plains of Molise. It is here where the best Molise wines are made, closer to the mountains and to the border of Campania.

There are some stark differences from a wine perspective. Abruzzo produces significantly more wine than Molise (more than ten times as much), and varieties change as well. In Abruzzo, it’s Montepulciano that dominates the red wine category, while in Molise it’s Tintilia, a fragrant and zesty variety that makes incredibly fresh yet gently tannic wines, along with a smattering of other international and Italian red varieties. For whites, Trebbiano Toscano, Trebbiano Abruzzese, Pecorino, Passerina and Cococciola are found in Abruzzo (in that order by quantity), while in Molise, you find Cococciola, and international varieties such as Riesling and Sauvignon.

The Challenges of Making Wine in Abruzzo and Molise

Imagine that you are a young winemaker full of inspiration and looking to prove yourself, or that you have a beautiful family farm that has been selling its fruit for decades to cooperatives, and you now want to create a new and riveting range of regional, terroir-driven wines to win the hearts and minds of the world. Now, imagine that you’re doing it in a region that’s steeped in large-scaled, overcropped, overoaked and rustically rich wines that have taught consumers around the world that you should be producing cheap, quaffable and forgettable Montepulciano with a twig tied to the neck of your bottle. Do you see my point? Producing large quantities of any variety of substandard wine in this region is often rewarded. A perfect example is the big, plump and sweet Pecorinos of the coast, versus the more defined, mineral-driven and age-worthy expressions from the higher elevations of Abruzzo’s interior. When Pecorino started to gain international recognition and become the most common and trendy white for sommeliers around the world to recommend, new plantings began, and the mass-producing machine started even though this is a mountain variety that excels in cool weather.

Today’s top producers are much more in tune with what could be better in their regions, and I’m not only speaking of the new generation or boutique productions. Less often do we find those grossly overoaked Montepulciano packaged in bottles that weigh more than the wines inside of them. Instead, there has been a move toward purity, as today we see many more fresh wines refined in stainless steel, cement, neutral barrels or carefully-chosen new oak that accentuates, instead of masking fruit. The combination of fresher and purer wines with unique, successful vintages in 2018, 2019 and now 2020, becomes a buyer’s market for well-priced and highly enjoyable wines that won’t break the bank. 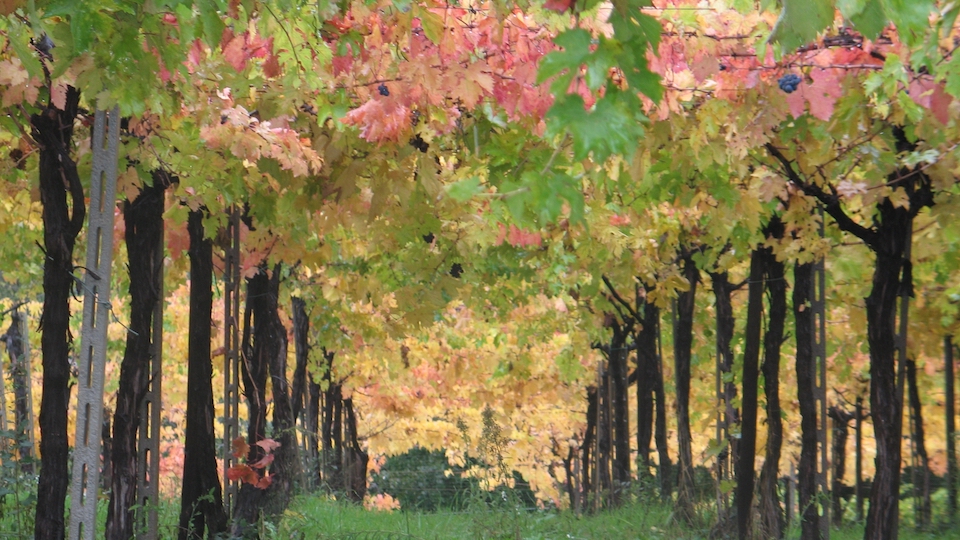 Traditional pergola abruzzese in autumn, as seen in vines at Torre dei Beati that are now nearly fifty years old.

Trebbiano Abruzzese on the Rise

It is impossible to ignore the rumor, now officially confirmed, that the secret behind the success of Valentini and Emidio Pepe’s Trebbiano d'Abruzzo is Trebbiano Abruzzese. The confusion over Trebbiano, with its many clones, and the many unrelated varieties often planted as Trebbiano throughout much of Italy has made it nearly impossible for a consumer to understand what to expect from the wines. Trebbiano Abruzzese is now seeing a renaissance in Abruzzo. Today, producers are looking to identify old Pergola-trained vineyards, replanting new ones through massale selection, and hoping to take advantage of the Trebbiano Abruzzese trend. However, there is still no way to identify what clones of Trebbiano a producer is using without being directed to them by someone with insider information. There is still no official classification that will tell consumers which clone or variety of Trebbiano is used, where it’s planted or the style the wine is made in; they are all labeled Trebbiano d’Abruzzo. Imagine if Verdicchio wasn’t called Verdicchio any longer - how would anyone know? With all of the excitement in the region, and the growing understanding of these wines around the world, we will one day see a better definition. For producers who work with the far superior Trebbiano Abruzzese (unrelated to widely-planted Trebbiano Toscano by the way), look to Tiberio, Valentini, Emidio Pepe, Valle Reale, Torre dei Beati, Terraviva and Amorotti. They also happen to make up a nice short list when exploring the region’s other varieties.

What a Difference a Vintage Can Make

Quite obvious throughout my tastings is that Abruzzo and Molise have recently witnessed a trifecta of good and, at times, excellent vintages from 2018 through 2020.

Two thousand-eighteen was quite cold, with regular amounts of precipitation in the form of rain but very little snow. Rains continued into the spring, and although bud break was on time, the high amount of precipitation resulted in fungal diseases amongst the vines. Summer was warm but balanced, with well-timed rain events that maintained health amongst the vines and led into a fresh and dry harvest season. Yields were generous, yet the wines have balanced acidity and depth without being concentrated, the result of a later-than-average harvest. The 2018 whites and reds are a pleasure to taste and should continue to improve with time in bottle. Top examples are packed full of depth yet vibrantly fresh.

The 2019 vintage started off with a mild and rainy winter, that continued into spring, as precipitations were heavy, and temperatures were significantly lower than average. This helped to ward off disease in the vineyards, yet it also created uneven shoots and disrupted flowering, which significantly lowered yields. However, with summer came warm and dry weather, with good fluctuations of temperature between day and night, which was followed by a mild and dry autumn. While the early-ripening varieties, such as Pecorino, were harvested earlier than usual, the later-ripening varieties, such as Montepulciano, were able to enjoy an extended time on the vines. From my tastings, it will be very interesting to follow both Trebbiano and Montepulciano from 2019, as they have a sapid intensity to them that could result in potential greatness. At this stage, the wines are fruit-forward and intense, yet well-balanced.

The best of both worlds is a great way to think about the 2020 vintage. While the world was struggling through a pandemic, there was one glimmer of hope, and that was how the vintage at hand was unfolding. For this report, I only tasted the young, fresh Pecorinos and Trebbianos, as most of the top wines are still in barrel. Judging by these wines, the 2020s are going to win a lot of fans. The unfortunate thing about 2020, as a vintage, is that it is a low-yielding year due to a return to freezing temperatures in the late spring. Otherwise it was very well-balanced, with a long growing season devoid of any major climatic swings or any of the drastic weather events that global warming has brought about in recent vintages. Both early and late-ripening varieties were picked on time and were physiologically ripe under the best conditions. It will be very interesting to see what the later-release and more important wines will deliver. 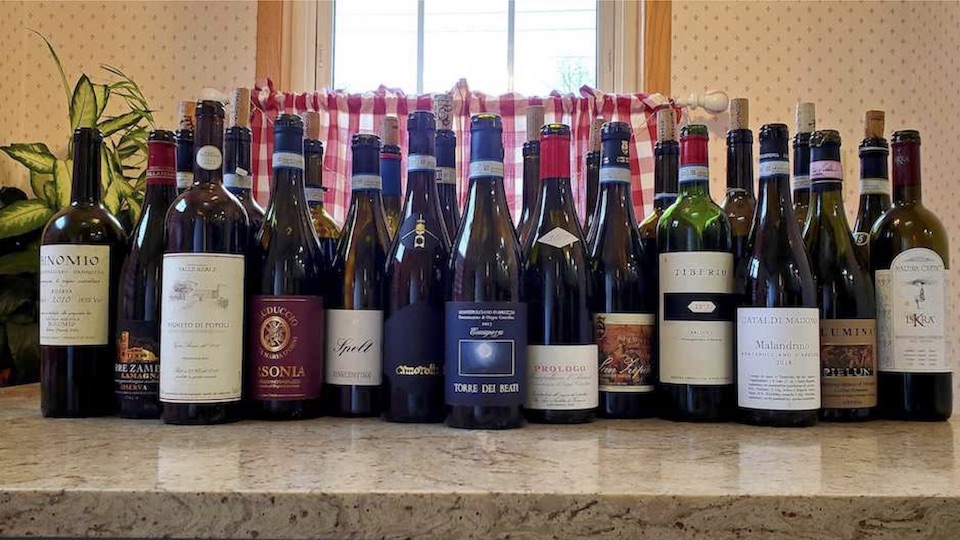 An embarrassment of Montepulciano riches.

Fear not; lovers of pink (or, more often, bright cherry in color) Cerasuolo will get its much-deserved time in the sun. Many producers submitted their new-release Cerasuolo, but they’ll be featured in my upcoming Rosé and Rosato article. All I can say for now is that they’ll be worth waiting for.

While readers still need to be careful of the super-sized productions of many cooperatives and some producers, quality has never been higher, intentions have never been better, potential has never been so closely realized, and frankly, relative value has never been as high as it is today. I find whites deserving world-class recognition and reds of tremendous depths, balance and aging potential. Abruzzo and Molise are more than meets the eye.

All wines for this report were tasted between January and March of 2021 in New York City.

Where the Wild Things Are: Welcome to Sardinia, Eric Guido, March 2021

Valpolicella & Soave: The Times, They Are A Changin’, Eric Guido, February 2021