No German Riesling region can boast more consistent and distinctively delicious success in vintage 2016 than the Nahe, but terroir and weather don’t offer the full explanation.

I have described the remarkable meteorological rollercoaster that was vintage 2016 in Germany’s Riesling-dominated regions in some detail in my reports on the Greater Mosel (Part 1 and Part 2). Located between Mosel and Rhine both literally and in the typical evolution of its growing season, the Nahe entered mid-September of 2016 with fruit considerably advanced in ripeness vis-à-vis the Mosel – a ripeness enhanced by marginally more water-retentive, albeit stony slopes that helped all but very young vines get through the torrid, rainless August and early September without stress or shutdown – yet not advanced to the point where there was any pressure to harvest. 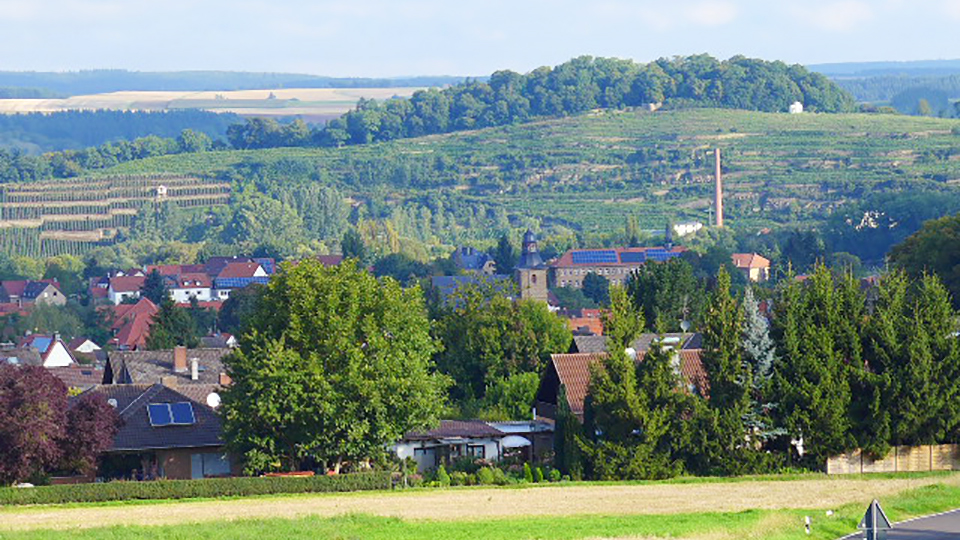 The Disibodenberg, being revived by Luisa von Racknitz, is a formerly monastic Nahe site associated with Hildegard von Bingen (Krüger-Rumpf’s Abtei Ruppertsberg another) that’s as impressive viticulturally as it is visually.

As Tim Fröhlich related, the sole reason that he began picking at the end of September was because, to his surprise, some of his grapes already tasted entirely ripe. Then came the prolonged chill and continued dry weather of October and early November, so that in the end scarcely any top Nahe growers harvested more than a very small percentage of their Riesling before mid-October. In fact, most picked their best grapes in late October or early November, and the results certainly bolster arguments you will hear from many growers that for the ultimate in Riesling aromatics, ripe phenolics and overall finesse, there is no substitute for the grapes hanging through a serious cold snap. Except that in this case it wasn’t a snap but rather a six-week spell under refrigeration, which also made for the most relaxed harvest most growers could recall and about which many testified that “you could choose the optimum moment” to pick any given parcel for any intended purpose. The only purpose 2016 fruit did not suit was ennobled sweetness, as there was virtually no botrytis. In partial compensation, here as elsewhere in Riesling Germany, there was an abundance of November Eiswein.

Apropos freezing, spring frost must be added to the litany of factors – including peronospora, sunburn and mild desiccation – that led to a relatively small crop. But due to whatever combination of viticultural skill and meteorological luck, none of the Nahe growers I visited had horror stories to relate such as the ones I encountered in several other German Riesling growing regions. And the resulting wines for the most part display a delightful combination of palpable density with relative alcoholic levity and textural richness with vivacity, clarity and abundant primary juiciness. Those Nahe Riesling collections that characteristically reward cellaring are likely to do so in spades this year, not because the 2016s are extremely high in must weight, acidity or dry extract, nor even more intensely flavored than Nahe Rieslings of other justly celebrated vintages, but because they are already so finely balanced in their youth and so refined—often downright intricate in flavor. 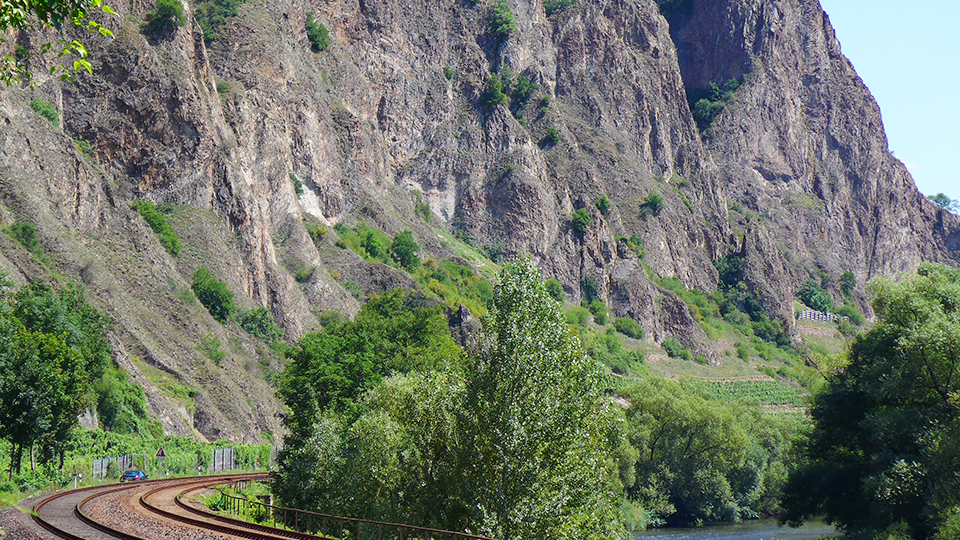 If the Nahe has suffered neglect, it wasn’t because its great sites weren’t visually memorable. Riesling vines cling to the rubble below Traisen’s Bastei, Europe's sheerest non-Alpine slope.

Without question, the Nahe is replete with extraordinary locations for growing Riesling. The 2016 vintage showcases how these are able to strike a critical balance between water retention and drainage as well as between, on the one hand, sun exposure and heat retention sufficient to promote ripeness and, on the other, cool enough conditions, especially at night, to preserve acidity. But it isn’t just the terroir here that’s talented: the region’s top growers are among the most adept anywhere in Germany. In many instances, success is enhanced by the collaboration of two generations and by the presence of extremely experienced, stable and motivated picking crews. The quality of harvesters is an often overlooked factor and represents an advantage that must be built up over time. Even where estates have gone from small or mid-sized to quite large – and the top Nahe domains have nearly all grown very significantly in recent years to surface areas of between 50 and 60 acres – their harvest crews have expanded from a strong base of veteran locals, extended family and annual foreign enlistees. What’s more, human nature helps the pursuit of excellence become self-perpetuating: internships at the top Nahe estates are highly coveted among the young sons and daughters of wine growers all over Germany, and not a few wine freaks and wine professionals-in-training compete for the honor of toiling in prestigious Nahe vineyards at harvest.

As home base for several of the most influential German wine-growing dynasties of the late 19th and early 20th centuries and not coincidentally a center for viticultural research, the Nahe emerged from former obscurity as a wine region and its prestige survived the worldwide depression as well as World War II. Even so, this was never a region whose notoriety was closely associated in the popular imagination with specific iconic wines or spectacular vineyard locations, even though the Nahe suffers no lack of either. And as post-war German prosperity expanded, growing regions nearer to the wealthiest urban centers or more traveled by tourists – the always-famous Rheingau but also the re-emergent Pfalz – began stealing any limelight the Nahe had once possessed. Growers of Helmut Dönnhoff’s generation honed their skills and were inspired under the tutelage of those cellarmasters at the vast aristocratic estates and the State Domain who had ensured the Nahe’s continuity and excellence. But before Dönnhoff, Schönleber and Diel ushered in a new era of recognition for their region, the Nahe of the late 1970s and the 1980s that I encountered at the outset of my wine career was in decline and even in peril, especially when judged by the extent to which once-prestigious vineyard land was going fallow or succumbing to residential or commercial development. 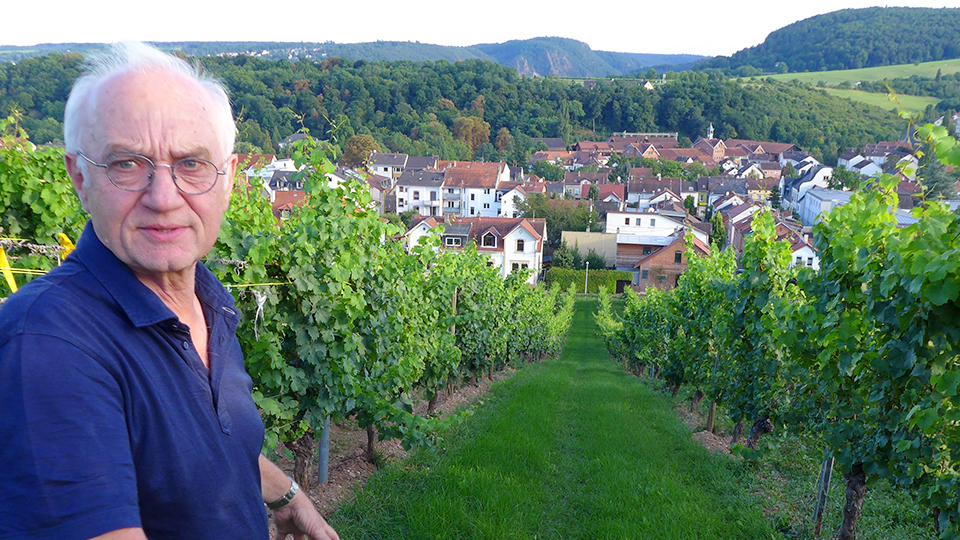 The “Toad’s Cushion” is Bad Kreuznach’s underground water supply, which protected it from urban development and its vines from stress even in torrid late-summer 2016, when Helmut Dönnhoff rendered his latest terrific Krötenpfuhl Kabinett.

It’s certainly not inaccurate to describe the Nahe’s viticultural evolution since 1990 as an inspiring tale of restoration and revival. But that misses a special source of Nahe intrigue and excitement. Yes, the remarkable slopes of Monzingen, Schlossböckelheim, Niederhausen, Traisen, Dorsheim, Bad Münster and other long-renowned villages are now receiving tender loving care. But there are plenty of locations that enjoyed significant prestige in the late 19th and early 20th centuries but lack name recognition today and cry out for attention, such as along the Alsenz, at Ebernburg and around Roxheim – although that last-named location is undergoing a revival at Dönnhoff’s hands.

And then there are places whose notoriety, if they ever had any, was lost in the mists of time. The Disibodenberg near Odernheim (being revived by Luisa von Racknitz) and the Abtei Ruppertsberg in Bingerbrück (the site of Krüger-Rumpf’s latest expansion) were both associated with Hildegard von Bingen and experienced their previous viticultural high points during the Middle Ages. But taste the latest wines from these locations and try telling me they don’t represent exceptional terroir. Even more dramatic is the case of Bockenau, whose Felseneck and Stromberg vineyards, as far as I or the Fröhlich family have been able to research, never enjoyed any prestige whatsoever. Yet today the Schäfer-Fröhlich wines from these two sites are unsurpassed by any Nahe Rieslings, and that includes those made at this same estate from much more famous sites. To say that the Nahe’s potential is still ripe for discovery is an understatement. And its great vineyards offer geological and microclimatic diversity unequaled by any other German growing region, which makes for collections of dazzling diversity.

This report is based on visits with ten Nahe growers between late July and mid-September of 2017, supplemented by subsequent stateside retasting. Following usual Vinous practice, scores on those few wines that I have not tasted since they were bottled are expressed in parentheses as point ranges. Wines I rated 86 points or lower are frequently alluded to but generally not accorded a tasting note. I make exceptions to that rule for wines I still deem good values or if I think a tasting note will demonstrate some important point (which might be that I think the wine in question is routinely overrated or perhaps that its latest, disappointing performance requires special explanation). Details regarding the conventions of nomenclature and scoring followed in my reports, including an explanation of when and why I reference A.P. (official registration) numbers, can be found in the introductions to my earlier articles on vintage 2015 and 2014 German Rieslings.