The saga of 2018’s radically precocious growing season has been thoroughly canvassed in my previous reports. Among interesting disparities in perception from one grower to the next there is a tendency by some to treat 2018 as unproblematic, especially in view of felicitous autumn weather and impeccably healthy, high-must-weight grapes. Other producers, instead, insist that the vintage was very challenging in regards to choosing the right moment to harvest any given parcel and optimize the aggregate of flavor, must-weight and acidity. So, while one group of German Riesling growers emphasized how relaxed harvest conditions were (for a change!), another insisted that concerned calculations and pinpoint precision were as important as ever. In a region where there are still so many large estates with geographically far-flung holdings and so much reliance on machine harvest as in today’s Rheingau, it’s not hard to imagine which viewpoint on 2018 was most widely adopted there. 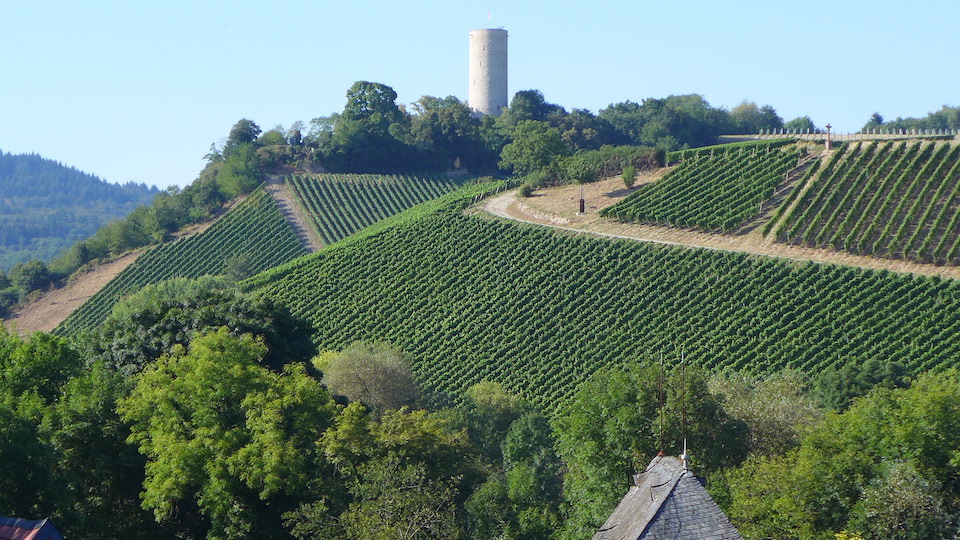 Again in 2018, thanks to Wilhelm Weil and his team, Kiedrich's Gräfenberg and Turmberg turned in performances from dry wine to TBA that need not fear comparison with those of the Rheingau's late 19th- and early 20th-century heyday.

Another sharp divide among growers in 2018 was between those who not only commenced harvesting record-breakingly early (because nearly every estate did that) but finished quickly as well, and those who took lovely weather as an excuse to extend harvest well into October or in some instances even beyond. If you have followed my coverage, you will note a tendency to prefer those results that were achieved in September or in early October. Summer drought was especially extreme in the Mittelrhein and western Rheingau, making Riesling grapes prone to irregular flavor evolution and the eventual wines susceptible to, among other things, harsh phenolics and eventual premature aging. But large parts of the Rheingau were also among sectors of Riesling Germany that in mid-September finally received some rain, which had a beneficial balancing effect by rehydrating grapes and stimulating a further measure of metabolic activity. 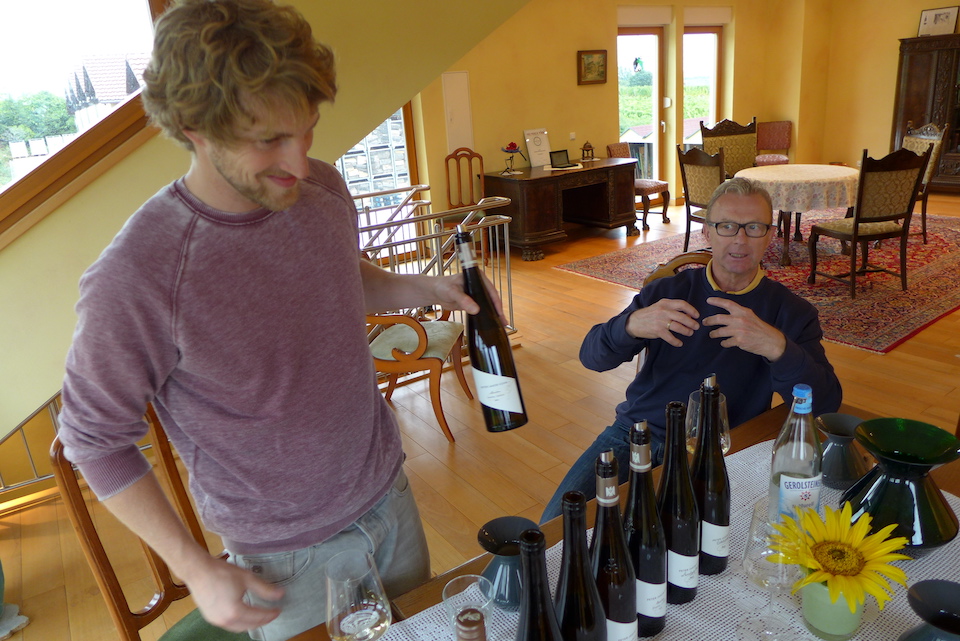 Peter Jakob Kühn and son Peter Bernhard showed me a remarkable set of wines. Their increasing emphasis on extended élevage and late release has meant that each collection reveals facets of three different vintages.

It’s become a repeated refrain that steeper, stonier, higher-elevation Rheingau slopes nowadays enjoy a significant advantage vis-à-vis those closer to the river, gentler in slope and featuring heavier soils, even though that latter group includes many sites that contributed much to the Rheingau’s fame (Erbacher Marcobrunn being the poster child). But the greatest challenge to surmount in recent years has been rot due to warmth and humidity at harvest. In dry, dry 2018, there was scarcely any botrytis. Even the noble sort of rot was relatively rare, though sheer abundance of grapes helped compensate for that among growers diligently concerned to render Beerenauslese and Trockenbeerenauslesen. Nevertheless, some prime hillside sites far back from the Rhein – those in Kiedrich most notably – once again seemed to enjoy an advantage, this time due to the cooling effects of elevation and wind exposure.

Since the overwhelming majority of Mittelrhein and Rheingau Riesling is rendered dry, 2018’s tendency toward high must weights posed potential problems with high alcohol. Some growers took the attitude that this was inevitable if one were going to achieve phenolically mature grapes. Others took steps to mitigate eventual alcohol. That might mean refraining from crop-thinning as aggressively as the huge number of clusters hanging in 2018 would otherwise have dictated. It could of course also mean harvesting even though one’s grapes possessed flavors less ripe than would usually be targeted. Since acid levels were low in 2018, many a grower let their legally dry wines ferment to lower residual sugar than usual, lest these end up not tasting well and truly dry. But further fermentation necessarily entails increased alcohol. What’s more, alcohol in itself engenders a certain faux-sweetness. Spontaneous ferments and cask maturation also mitigate eventual alcohol. You can follow the finished results from all of these practices in the Rheingau, with my grower introductions and tasting notes as a guide. Happily, only a minority of the wines I tasted displayed flab or lacked liveliness – even among those whose analyses reveal exceptionally low acidity by Riesling standards. The primary reasons for this are (as discussed in previous reports): overwhelming dominance of efficacious tartaric acidity over malic; low dry extract, hence low levels of acid-buffering potassium; and stimulatory succinic acid as a byproduct of fermentation. 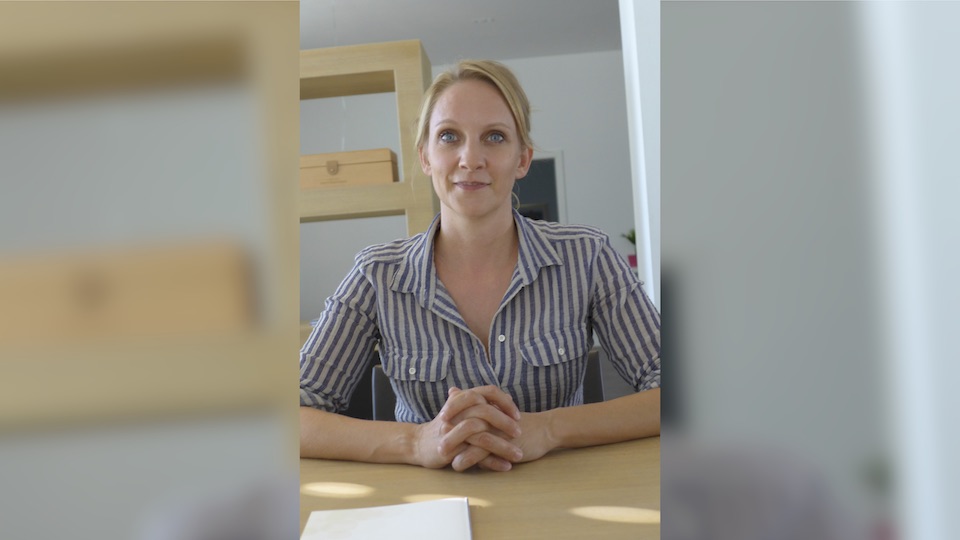 Eva Fricke's emergence and evolution as a vintner is one of the really bright spots in today's Rheingau scene. Happily, she is managing to add choice new parcels to her young estate.

Rheingau in the Rearview Mirror

It’s also become a regular refrain among critics to lament a tendency of Rheingau estates to rest on their laurels and be too easily satisfied by the high prices and reasonably steady demand that longstanding reputation, high tourist traffic and proximity to some of Germany’s wealthiest cities engender. A relative scarcity of opportunities for young talents to acquire vineyard access is often remarked on as well. So far, it’s not clear that the continuing attrition of once-renowned Rheingau estates owned by German nobility – Langwerth von Simmern being the latest of these to dissolve – will significantly tip the region as a whole in the direction of greater quality-consciousness and innovation. 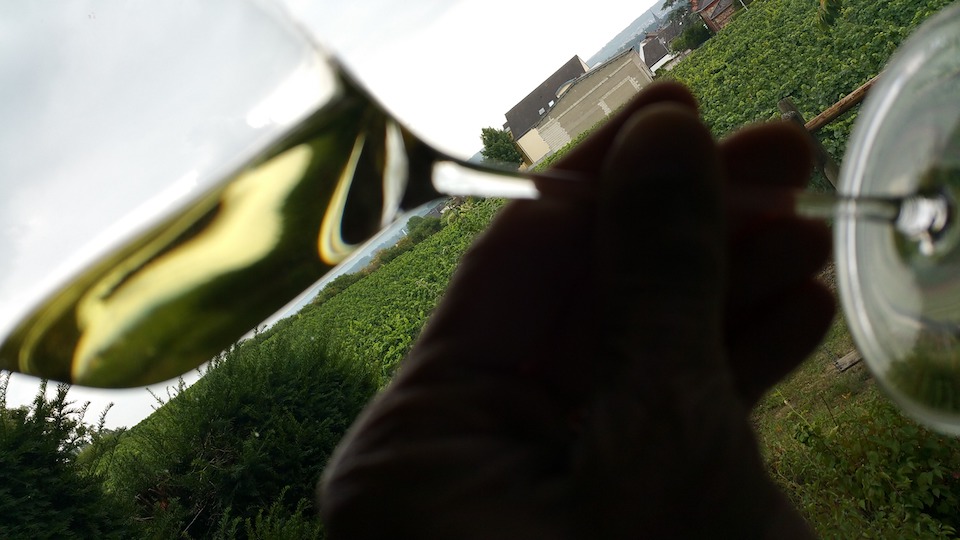 The practically Kabinett-like pale green-gold hue of a Kühn BA testifies to how impeccably healthy were even the most concentrated, overripe Riesling berries of 2018.

I usually do my tasting in the run-up to harvest and have occasion to witness the condition in which vines and crops have been handled. In the Rheingau, this can sometimes be depressing, and I can find myself surprised that the eventual wines taste as good as they do. During the second half of my vintage 2017 tastings, I derived a different sort of insight from walking the vineyards. It was mid-November 2018 by the time I got back to the Rheingau. Yet, quite a lot of fruit was still hanging – and not for eventual picking, except by birds. Less quality-conscious producers had already reached the maximum total amount of juice that they were allowed to process, even after the authorities had raised the already generous per-hectare limits that normally pertain. It was a sad commentary on a prestigious growing region most of whose surface area is considered (including by the local VDP) to be Premier- or Grand Cru in quality potential. Of course, few if any of the estates whose 2018s I tasted will have been ones where crops were left unharvested. And increasingly many of those I visit will be viticulturally meticulous. But that’s simply because I have gradually dropped proven underperformers from my calendar. If you want another indication that not all is well in the Rheingau, consider how very few wines I taste from sites in Erbach or Rauenthal that have historically been among the region’s most prestigious.

But many changes in ownership and management are taking place that may prove beneficial, and I shall try to get on top of these in the coming year as I assess the 2019s and look forward to being able to again, with vintage 2020, taste young Rheingau wines in situ. Among encouraging signs from growers, whom I routinely visit, is the presence of some who are clearly taking positive cues from the Rheingau’s past: a past in which, among other things, understatement was treated as a virtue, 10 or 15 grams of residual sugar in one’s “dry” Riesling was no cause for alarm, and extending élevage to a year or more was viewed as a potential tool for allowing one’s sites and vines to express their full vinous potential. But the past will be no guide for dealing with climate change, and the next several years will witness a grappling with issues that in the past didn’t – or, like irrigation, legally couldn’t – even arise. I fear, though, that far too much institutional energy during this same period is going to be spent on transitioning to a major, already much-vaunted but almost certainly oversold revision of German wine law that must somehow conform to an EU-mandated framework. 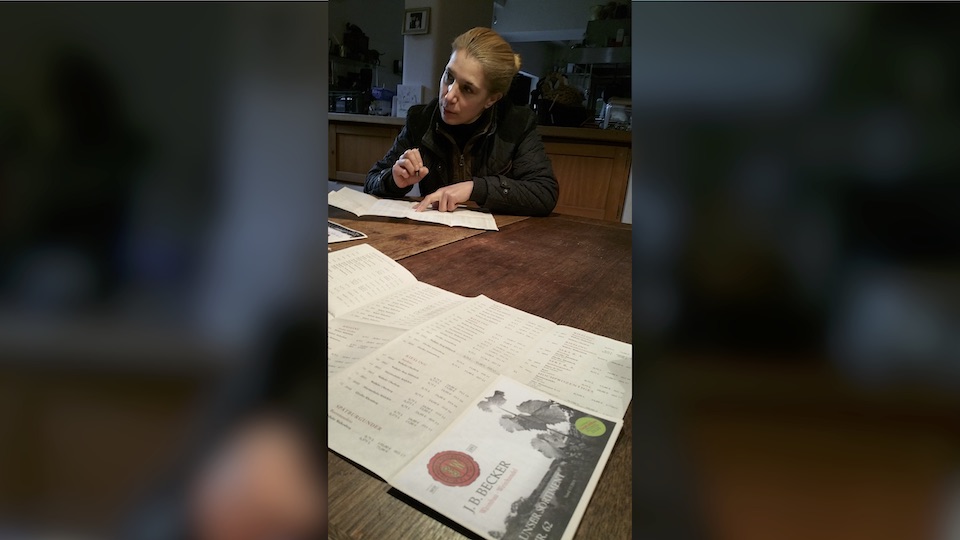 Eva Becker's talents serve as guarantor of a highly distinctive style and formidably consistent quality at the J. B. Becker estate, which she and her husband, veteran vintner Hans-Josef Becker, run hands-on.

This report is based on visits with 23 Rheingau and Mittelrhein producers in late August, September and November 2019, supplemented by subsequent stateside assessment of samples that included wines from one further estate that I did not visit. Following usual Vinous practice, scores on those few wines that I have not tasted since they were bottled are expressed in parentheses as point ranges. Wines I rated 86 points or lower are occasionally alluded to but generally not accorded a tasting note. I make exceptions to that rule for wines I still deem good values or where I think a tasting note will demonstrate some important point (which might be that I believe the wine in question is routinely overrated, or perhaps that its latest, disappointing performance requires special explanation).

2015 Rheingau and Mittelrhein Riesling: Excellence from Those Who Demand It, David Schildknecht, September 2017