Like their counterparts from Rheinhessen, the top Pfalz Rieslings of 2016 are wines of delicious and animating complexity that managed to benefit from the growing season’s chilly October.

I have already recounted the arc of German Riesling’s remarkable 2016 growing season in the introductions to my reports on the Greater Mosel (Part 1 and Part 2). In the Pfalz, as in Rheinhessen and the Rheingau, those growers whose restraint in harvesting enabled them to benefit from the chilly weather that set in on the heels of a record-breakingly hot, dry September were rewarded with Rieslings for which Bürklin-Wolf’s heading – “cool finesse” – was entirely appropriate, while von Buhl, albeit indulging in some wishful thinking, titled their vintage report “Back to Cool Climate.” That having been noted, many growers felt the need to begin picking well before the onset of chill. Despite the incredibly rainy, difficult start to the growing season, July was warm, and serious heat, as well as clear skies, arrived by the end of that month. As usual, the Pfalz was warmer and drier than other regions, so that ripeness – at least in terms of must weight – caught up by early September. Fearing that continued heat might rob the fruit of acidity, or simply out of concern to avoid whatever further surprises nature might have in store, many estates began picking. 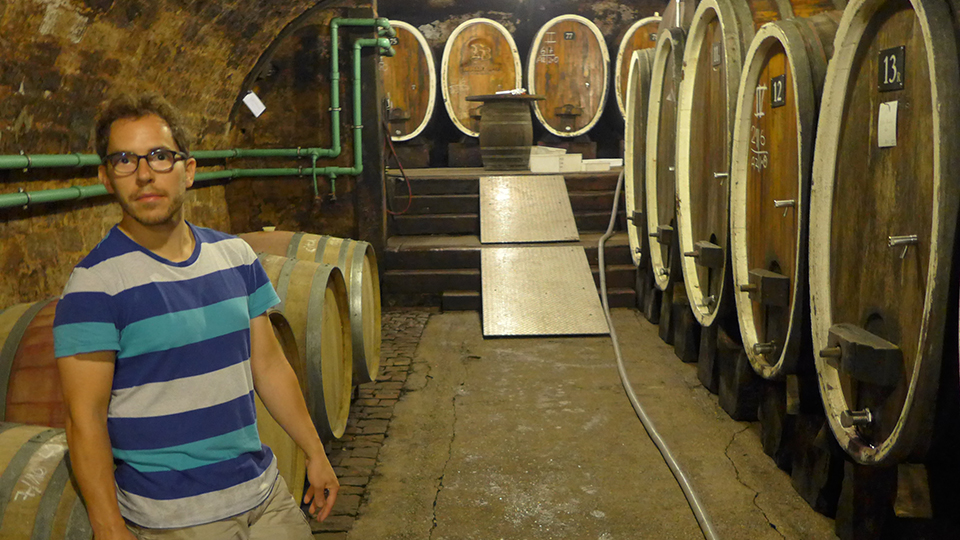 New Blood: Young Italian Nicola Libelli was handed the reins at Bürklin-Wolf after two years assisting the late Fritz Knorr, last in a four-generation line of Knorr cellarmasters there. Libelli is both upholding the estate's impeccable standards and innovating.

Jan Eymael at Pfeffingen brought in his first Riesling grapes on September 18. “But they ended up barely gaining sugar in the weeks that followed,” he reported, speculating that this was largely due to drought stress. “In many sites the must weights only moved marginally within a three-week period, which was something not even the veterans here could recall having experienced,” added Richard Grosche of von Buhl. Eymael’s diagnosis might seem paradoxical given that in most German growing regions a year’s worth of precipitation had already fallen in the first six months of 2016. But growers have begun to recognize (as I discussed in detail when introducing vintage 2015 and comparing it with 2003) that once their vines become accustomed to ample water and adjust their metabolism accordingly, they leave themselves especially vulnerable to subsequent deprivation. (Conversely, as in 2015, if they accustom themselves early to drought, they can more easily withstand a hot, dry summer and keep metabolizing.) 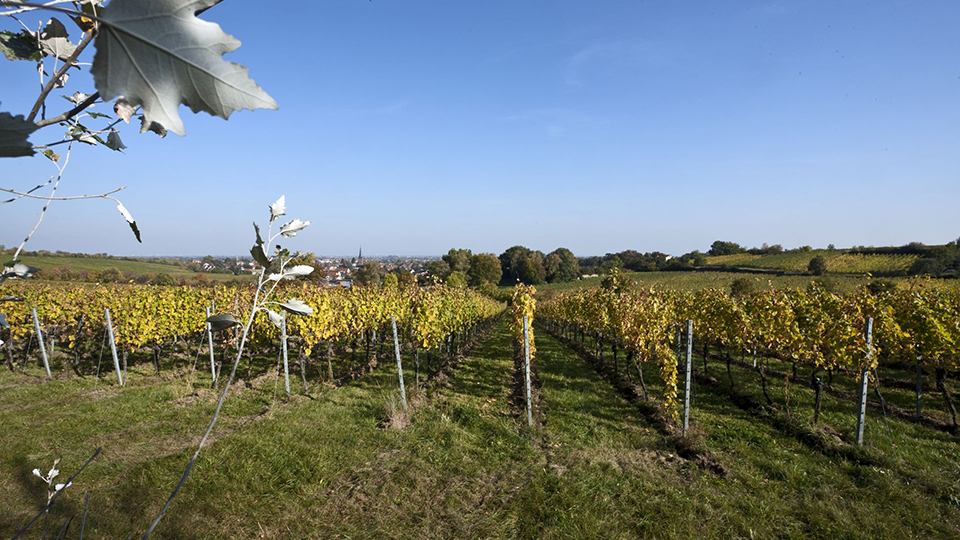 Long-known simply as "Berg" for its location high-up against the Haardt forest, Deidesheimer Paradiesgarten acquired that name after a former Weingut Von Winning owner erected a statue of Eve there. Von Winning, Von Buhl and Christmann are demonstrating this site's under-estimated potential in an era of climate change.

In the event, Eymael didn’t pick his two Grosse Gewächse until a full month into harvest; Bürklin-Wolf reported one of the most relaxed and longest harvests in recent memory, ending on October 15. Mathieu Kauffmann, after having acquired a reputation for audaciously early picking, did not bring in the last von Buhl Grosse Gewächse until several days after that. The weather remained so cooperative that Rieslings at Von Winning, Rebholz and Gies-Düppel, as well as a few wonderful oddities such as Müller-Catoir’s quartet of Rieslaners and a Bassermann-Jordan Auslese from the rare Goldmuskateller grape, were not brought in until late October or early November. Scarcely any botrytis materialized, so nobly sweet wines are rare and more likely to have relied on healthy desiccation such as that familiar from Rieslaner. 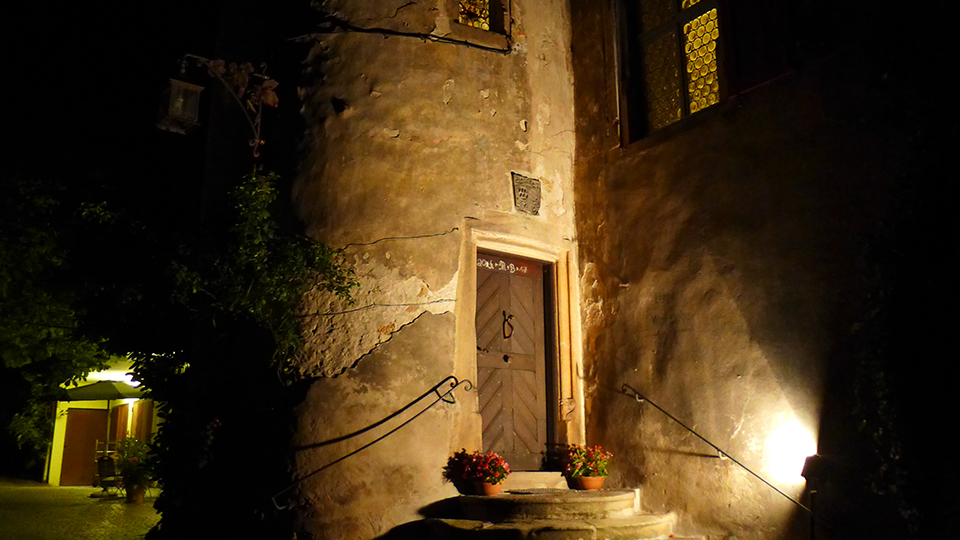 Hansjörg Rebholz compares 2016 to 2008 not only for what he calls its combination of “precision, minerality and levity” but also for the extent to which the wines have been underrated in their youth. “In ten years,” he predicts, “2016 will be the vintage for whose wines Riesling lovers – or at least the freaks among them – will be searching. It’s not for beginners. But it’s so fine, so fantastic [Grossartig].” I could take exception to the notion that 2016 lacks potential for mass appeal. Even many ostensibly simple wines among them strike me as full of charm and infectiously drinkable in their combination of levity, ripe acidity and early harmony. I take Rebholz’s points, though, that the 2016 vintage has been widely underrated – when will the assessment of vintages based on must weight and prevalence of super-concentrated elixirs finally end? – and that the best wines deliver finesse and intrigue to keep serious devotees of Riesling engaged for many years and make them wish they had bought more. 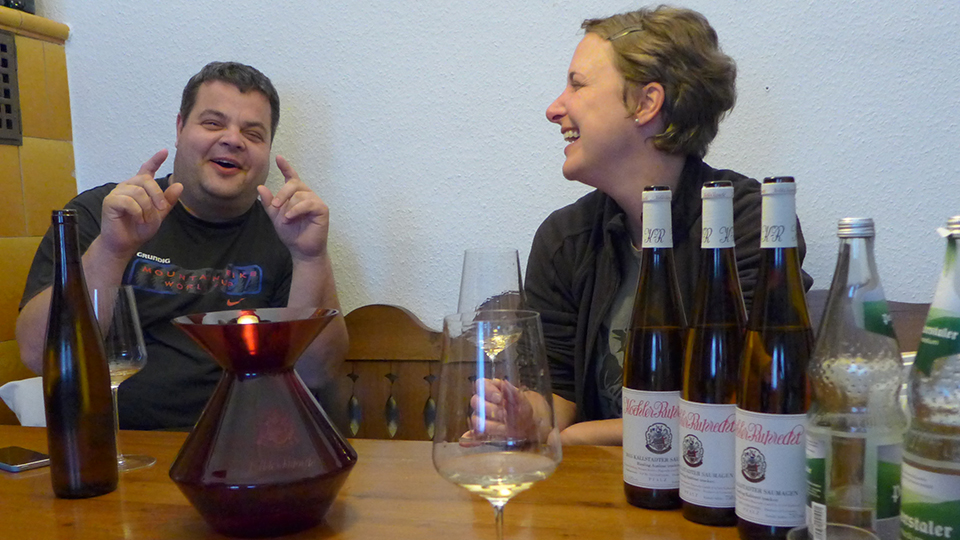 Dominik Sona and Franziska Schmitt represent another inspiring Pfalz tale of continuity and innovation as they perpetuate a tradition of stellar Koehler-Ruprecht Rieslings begun by long-time owner-winemaker Bernd Philippi, whose international activities leave time for his own tiny but sensational project in Kallstadt's Saumagen vineyard.

This report is based on visits with 20 Pfalz growers between late July and mid-September of 2017, supplemented by subsequent stateside retasting, including samples from two additional estates. Following usual Vinous practice, scores on those wines that I have not tasted since they were bottled are expressed in parentheses as point ranges, and there are more of these than in my other reports on Germany’s vintage 2016 Rieslings. Bottling for the top Bürklin-Wolf wines only took place on the eve of the 2017 harvest; some from von Buhl even later; and the Grosse Gewächse from both estates are released late, precluding my revisiting them prior to release. Speaking of late releases not yet tasted, like many of you I anxiously await a report on Bernd Philippi’s 2016 Kallstadter Saumagen. But neither he nor his collaborators the Knipsers were ready to show that wine to me. I can report, however, that Philippi’s Saumagen Riesling will appear – with a highly provocative label – under the estate name “Saumagen.” Retasting the finished 2015 and 2014 in the late summer of ‘17 confirmed my high opinion of both.

Wines I rated 86 points or lower are frequently alluded to but generally not accorded a tasting note. I make exceptions to that rule for wines I still deem good values or where I think a tasting note will demonstrate some important point (which might be that I believe the wine in question is routinely overrated or perhaps that its latest, disappointing performance requires special explanation).