Astute wine critics from Karl Heinrich Koch and Maximillian Ripper in the 1890s to Frank Schoonmaker in the 1950s to Otto Loeb and Hugh Johnson in the early 1970s have praised the Saar as capable of attaining the pinnacle of Riesling brilliance. But closer to our own time, the wine-growing stretch of this tributary – which accounts for just under 10% of Greater Mosel acreage—traversed a period of economic and reputational decline, notwithstanding the continued eminence of Egon Müller’s Scharzhofberg and the stalwart persistence of a few quality-conscious family estates. 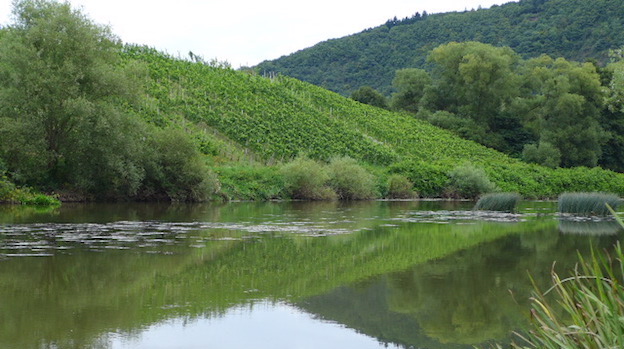 The unusually warm and uniquely cobbled Saarfeilser vineyard opposite Schoden confirms its historic excellence thanks to proprietors Florian and Peter Lauer, Claudia and Manfred Loch, and Mosel-based Nik Weis of St. Urbans-Hof

A Comeback in Recent Years

Recovery began late in the 20th century after slumping land prices encouraged a gradual influx of outsiders and local crossovers from other professions that continues today. The Saar is not only regaining its place as a treasure trove of distinctive, outstanding Rieslings but also setting an admirable example of tolerance for stylistic diversity, creatively mingling tradition and innovation in viticulture as well as marketing.

“If you’d asked me about this vintage during the harvest,” quipped veteran Erich Weber of the Saar’s Hofgut Falkenstein, “I’d have told you ‘Game over! We’ve already lost.’ I have never had such difficulties as in 2014. You had to work fast, fast, fast. You looked at the grapes in the morning and they appeared okay. The next morning or the morning after that they looked like a disaster. I’ve never seen anything like it. It was the warm rain beginning on the 8th or 9th of October that did it. At night it was still 20 degrees C (68 degrees F.) And the grapes were approaching full ripeness with tender skins. When we saw how brown the fruit was, even after selection, we thought ‘uh-oh, this is going to be something completely different.’” After an account like that, you might not be surprised if you were told that the bottled results from Weber were also the weakest and least representative in a quarter century. But in fact, on the contrary, many remarkably lovely Falkenstein 2014s showcase the distinctive virtues of that estate’s wines, and similar claims can be made for most of the 13 Saar collections I tasted. 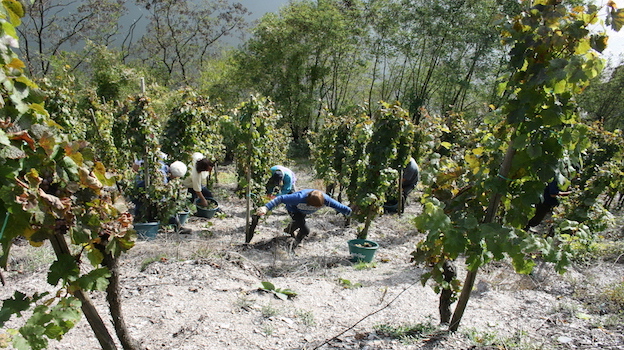 Perched high above the Saar between Ayl and Saarburg, the Schonfels vineyard was improbably brought back from scrub and vine sprawl by Florian Lauer and is now farmed by Helmut Plunien as well

Hanno Zilliken, whose family’s Saarburg estate boasts an unbroken record of excellence going back more than a half century, proposed the following explanation for success in 2014: “The weather is always a little more raw here along the Saar than elsewhere in Riesling Germany, so the grapes ripen later," he noted. "That was an advantage in 2014 because the grapes were still relatively firm and resistant to insects and rot during the rainy period." Yet Egon Müller, who brought in his Spätlesen before the worst October rains and finished his entire harvest extremely early, rendered the finest collection from this vintage to be found anywhere in the greater Mosel.

In the end, one is left to conclude that there were various ways to overcome the challenges of 2014, and that the Saar’s high rate of success is a tribute as much as anything to outstanding sites farmed by so many talented, ambitious growers unencumbered by tunnel vision. The best Saar Rieslings of the vintage share vibrant, at times mouth-shaking acidity and, even at the dry end of the sweetness spectrum, alcoholic levity. But sadly, while it was possible to succeed aesthetically speaking, fiscal failure was inevitable. “Even in really difficult years we can make outstanding wine nowadays on the Saar,” opined Manfred Loch of Schoden’s Weinhof Herrenberg. "But the question is: with what effort? I can tell you that 2014 has left us longing for the return of a ‘normal’ year with less stress,” not to mention less red ink. 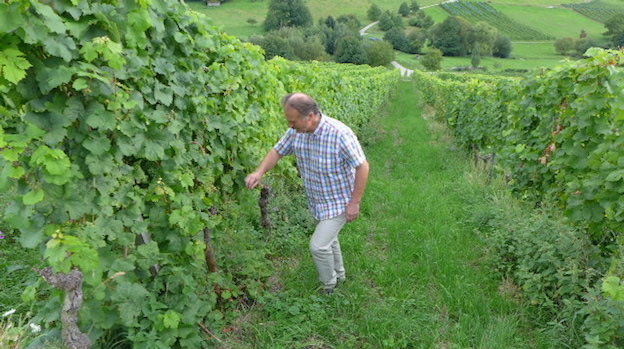 When Erich Weber, shown here in his Niedermennig vineyards, founded his Hofgut Falkenstein in 1981, his turn-back-the clock practices were a complete anomaly. Today he is one of numerous visionaries reclaiming their region’s great Riesling reputation

(For further details on Germany’s 2014 vintage, see my coverage focused on Rhine Rieslings. A report on the Mosel proper and Ruwer will follow shortly. Note that estates covered in this report are grouped for convenience of access under the sub-region in which they are located, but in addition to estates located on the Saar, the following producers also bottle important wines from the Saar and will be covered in the final installment of my 2014 vintage report on the Mosel: Reichsgraf von Kesselstatt, located in the Ruwer, as well as Markus Molitor and Nik Weis/St. Urbans-Hof, both located in the Middle Mosel.)