Homes Away from Home

On Sunday, December 17, two of Germany’s most highly reputed Riesling estates—one long-established, the other just eight years old—dispatched a simultaneous pair of startling announcements. Klaus Peter and Julia Keller, it seems, are taking control of the parcel in Piesporter Schubertslay that Keller protégé Julian Haart has brought to prominence since leasing it from the Vereinigte Hospitien in 2011. For their part, Julian and Nadine Haart announced the acquisition of a parcel in Flörsheim’s Frauenberg in the Rheinhessen Wonnegau, a site best known through the Pinot Noir that Keller grows there and the Riesling Grosses Gewächs fashioned by Oliver Spanier of Weingut Battenfeld-Spanier.

The accounts given by Klaus Peter Keller and Julian Haart are remarkably similar and, to anyone who knows them well, entirely plausible. “Ever since my time at the Keller winery,” explained Haart, “not only have Julia, Klaus Peter and their sons Felix and Max become a part of our own family, Flörsheim-Dalsheim has also become something of a second home for us. The limestone-rich soils of this sector fascinated us and we are delighted that now we can render  Rieslings there.” 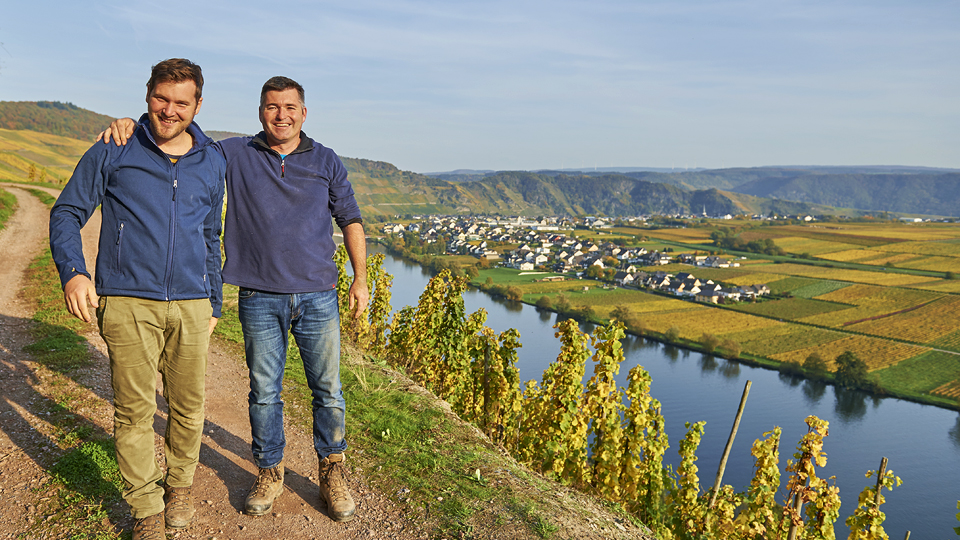 “The Mosel blood in my veins prevailed,” said Keller of his decision to establish this distant viticultural outpost. “It feels like a homecoming,” he added, pointing out that because his mother is from the Mosel, he has been spending time there regularly since as early as he has recollection. But a moment later he got right down to what seems to me more the point, with this true confession: “I’m a wine freak (Weinverrückter), and after our vineyards in Dalsheim, Westhofen and Nierstein, those of the Mosel and Burgundy are my great love.” Apropos which, Julian Haart also announced that “we have acquired a lovely parcel in the heart of the fine Wintricher Herrgott, where next year we’ll plant Pinot Noir. Our heart has always beaten for the great Burgundies of the Côte de Nuits, and in this way a wish that my wife and I have long harbored will be fulfilled.” (The Haarts’ friend Daniel Twardowski, to whom they first introduced me, farms seven acres of Pinot Noir in the nearby Dhroner Hofberg with impressive results, about which I have written.)

“We already had our first joint work days,” Keller had reported to me excitedly in late October, adding “For us the Schubertslay is one of the most beautiful vineyards in the Middle Mosel ...  except for the snakes!” I pointed out that in Wiltingen’s Schlangengraben (“snake pit”) and other German vineyards the presence of snakes is associated with springs in the rocks, considered a plus provided they ensure just enough summer moisture to protect the vines from heat stress. And by any account—including that of the Prussian tax authorities 150 years ago—the Schubertslay is top-class Riesling terroir, something that will also be evident to anyone who has tasted the stylistically varied wines Haart has lately been crafting from the site. It forms a brief break between two sections of the very large, celebrated Einzellage Goldtröpfchen (above it is the Piesporter Falkenlay) and owes its continued recognition as a self-standing vineyard under the 1971 German Wine Law to the lobbying efforts of the Vereinigte Hospitien, which then owned all or virtually all of its roughly two-acre surface area, most of which Haart has been leasing. The vines are ancient, believed to date to before the First World War; and although old vines—even Riesling on the steep slate slopes of the Mosel—are by no means always low-yielding, the crop from these centenarians in the Schubertslay has been miserly by any standard. 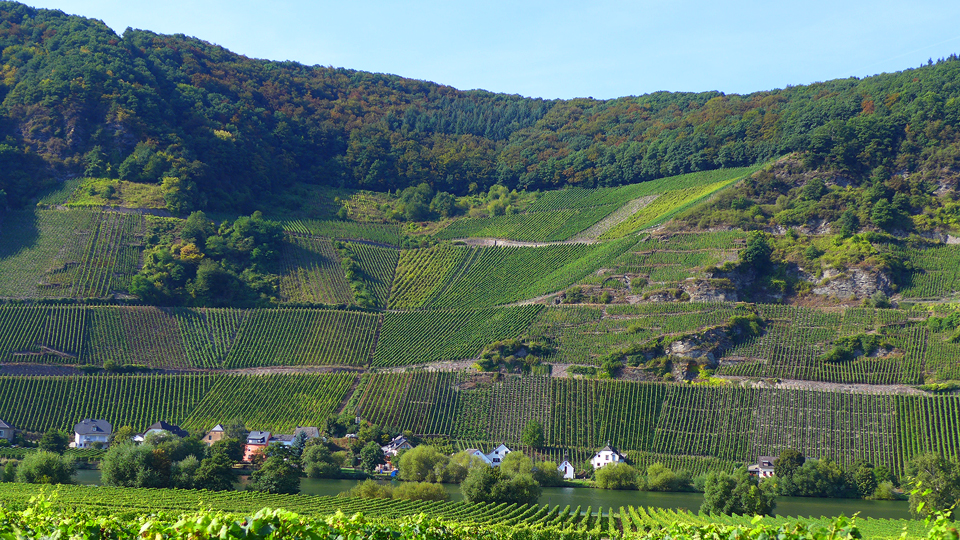 The Schubertslay runs underneath the two most prominent rock outcroppings above

There will be considerable continued collaboration on these two projects, with Keller keeping an eye on Haart’s Frauenberg while the Haarts help out in the Kellers’ Schubertslay, where son Felix Keller also plans to spend a lot of time. But cellar ambience (including, of course, the local yeast population) and stylistic inspiration alone ensure that Keller’s Schubertslay will be a thing unto itself, while Haart’s Frauenberg is something entirely novel. I wondered whether there was any challenge in transporting grapes from vineyards so distant, but Keller assured me that the refrigerated trucks he already uses to guarantee that grapes picked in Nierstein arrive unchanged at his cellar 40 minutes away will be able to handle the extra hour or so it will take to drive from Piesport to Flörsheim-Dalsheim.

Asked what sort of wine he planned to make from his new vineyard, Keller replied that “nature is boss regardless, so we’ll see what she makes possible,” adding that “each year is something new again.”  Since, inspired by the Mosel, he has been engaged since 2012 in an impressive attempt to resuscitate on the Rhine the style and reputation of “Kabinett,” one can only hope that under Keller’s watch there will continue to be a Schubertslay Riesling Kabinett. Haart shared with many of his fellow Mosel partisans of Kabinett a belief that achieving complete, complex flavors from harvests at low must weight is best achievable with old, ungrafted, single post-trained Riesling vines such as those in the Schubertslay. It’s a pretty sure bet that, stylistically speaking, Haart will have Keller’s Grosse Gewächse in mind when he approaches the Frauenberg; but he might have a surprise in store for us (or Nature for him).

There are examples of prominent German growers or proprietors involved with projects in far-flung regions or different countries. But for two German growers to personally farm Riesling in such disparate sectors of their home country appears to be unprecedented. It’s hard not to wonder whether Keller and Haart could be setting an example that others will follow. Ask a German Riesling grower who else’s wines he or she most enjoys drinking or finds most exciting, and very often the answer will be Riesling from another region of Germany. Whether or not a trend is being set, the fruits of these two new projects (indeed, three, counting Haart’s Pinot) will, with good reason, be eagerly awaited by those who have followed the 21st-century German wine scene.