The Saar and Ruwer yielded a wealth of wines with improbable balance and finesse considering the meteorological extremes that characterized the 2016 growing season.

I described the turbulent course of vintage 2016 – with its three dramatic phases of record-setting springtime and early summer rain, scorching heat and drought through September, and a wide, chilly, rain-free harvest window – in detail in the introductions to my reports on the Middle Mosel. Conditions on the Saar and Ruwer followed the same pattern without notable regional idiosyncrasy.

In the course of 2016’s “Act One,” few growers imagined that this vintage could end happily, and come July many were less worried about whether the eventual crop would ripen than about whether there would even be a crop. The combination of rain and mild temperatures led to almost unprecedented outbreaks of peronospora (downy mildew), which peaked inconveniently just as the vines were flowering, belatedly, at the end of June. The capriciousness of this scourge was emphasized again and again by experiences like those of Florian Lauer and Helmut Plunien (Weingut VOLS). In the Schonfels, where they have restored adjacent parcels whose steepness dictates that spraying take place by helicopter, Lauer rendered an exceptional 2016 from scarcely diminished yields while Plunien’s vines were so devastated by peronospora that he didn’t even attempt to harvest them. Lauer was the first to admit that losses to “pero” were more a matter of luck than skill or diligence. Some of the Zillikens’ tractor attachments were delayed by one or two days coming out of a repair shop and by the time spraying could resume, the stage was set for a crop loss of over 50%. Meanwhile, the Wagners, whose estate is similarly dominated by Saarburger Rausch, experienced nearly normal yields. 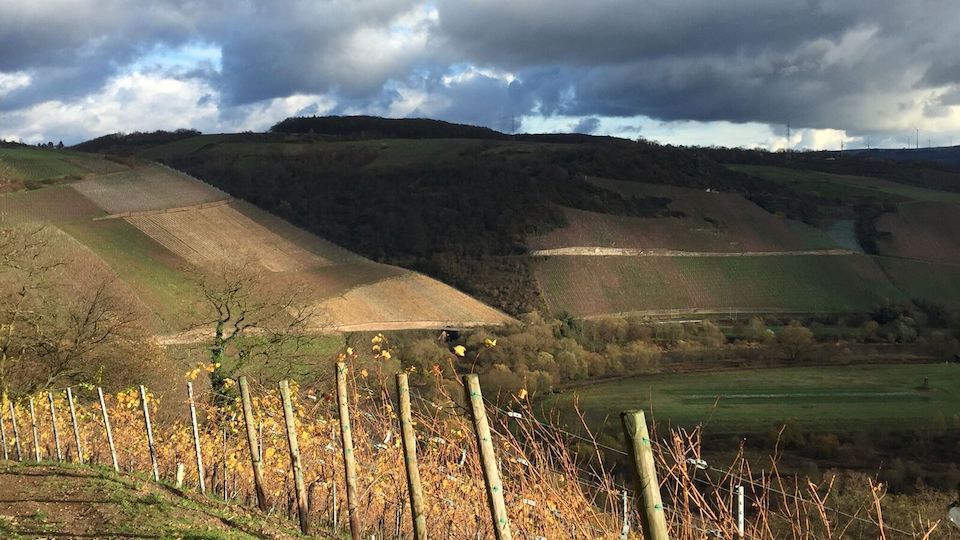 Wiltinger Braune Kupp and Gottesfuss—which again in 2016 yielded exceptional Rieslings for Egon Müller (Le Gallais) and Roman Niewodniczanski (Van Volxem)—as seen from the Wiltinger Kupp (where von Othegraven and VOLS have important holdings). Wiltingen’s Scharzhofberg has been stealing the headlines ever since Napoleon ordered a tax classification of the Greater Mosel’s vineyards, while the trio of Wiltingen slopes that actually face the Saar has been underestimated.

A Drawn-Out Flowering and a Leisurely Harvest

The rain and mildew resulted in a protracted, irregular flowering. At the Karthäuserhof, it dragged out over two and a half weeks. And the persistent rain through mid-summer made for youthful Riesling berries so well-watered that in vineyard manager Sascha Dannhäuser’s words, “they looked like Pinot Blanc.” Vine shutdown during the hot, dry late August and September was slightly less likely along the Saar and Ruwer than in other German Riesling growing regions, but sunburn was an omnipresent risk, and many growers, including Lauer, lost more fruit to it than to mildew. By the end of September, though, Riesling had not just ripened more fully than growers had imagined in their fondest July dreams, but also less irregularly than feared. Even a veteran like Hanno Zilliken reported that he “was amazed to see just how much one month could accomplish.”

And optimal harvest conditions permitted growers to take their time, if need be compensating for any heterogeneity in must weight and flavor that they deemed problematic with selectivity or multiple passes through their vineyards. Multiple passes for botrytis, though – whether to cull the bad sort or collect the good – were rare. In a year when Egon Müller and his crack picking crew could not find enough ennobled fruit to support a Scharzhofberg Auslese, you can be sure that few wines in that genre were harvested anywhere on the Saar or Ruwer. As in the Middle Mosel – and for reasons that aren’t clear – the grape component that differed most widely from one estate (occasionally from one vineyard) to another was acidity. I can’t recall when I last experienced both less-than-optimum acidity and prominent acidity in the same Saar vintage. 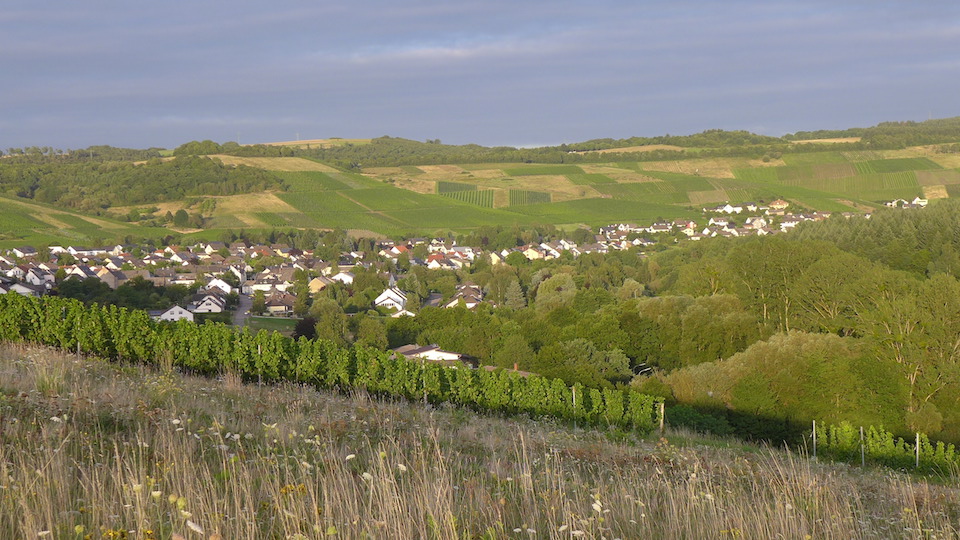 Thanks to recent recognition of Hofgut Falkenstein as one of the Greater Mosel’s finest estates (never more so than in 2016) and to the expanded efforts of Weingut Von Hövel, the vine-lined crescent known as Konzer Thälchen—believed to represent the Mosel’s ancient riverbed—is regaining a renown enjoyed in the late 19th century. Here: Krettnacher Euchariusberg and Altenberg viewed from Niedermenniger Herrenberg.

Among the characteristics of the vintage delightfully displayed on the Saar is a tendency toward modest must weights. This is one of the factors behind the enhanced elegance and expressiveness of the Grosse Gewächse at von Kesselstatt, Lauer and von Othegraven (not to mention a predictably fine collection of Grosse Gewächse from Van Volxem and a stunner from Zilliken). Vintage weather patterns and the eventual grapes’ rude good health are no doubt in large part responsible for the aforementioned successes, but I sense that some stylistic course correction on the part of their authors may also have played a role. Of course, for a combination of complexity, finesse and low alcohol in dry Riesling, you need look no further – especially this year – than Hofgut Falkenstein. And a final upbeat note on which to end my assessment of a vintage whose fruits no Riesling lover should neglect to cellar and follow: The Ruwer, collectively, was more successful than it has been for some time. 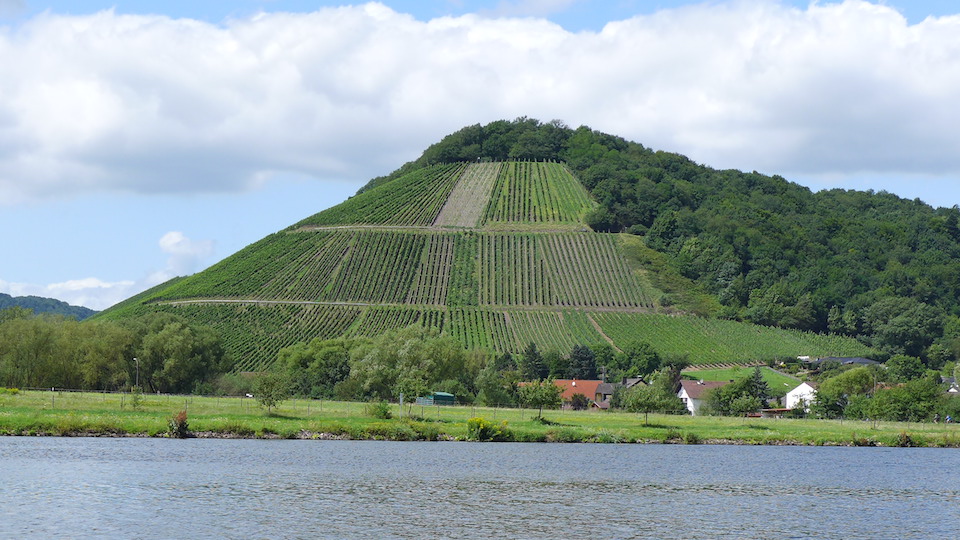 The prow of Ayler Kupp practically cries out “I am cru classé.” But as Florian Lauer has demonstrated with his Rieslings from Neuenberg and Kern, there was good reason for the historically high ratings of sites around the bend, as the slope turns away from the River Saar.

This report is based on visits with 18 Saar and Ruwer growers between late July and mid-September of 2017, supplemented by subsequent stateside retasting and the assessment of three additional collections entirely via samples. I remind readers that these growers are grouped together based on winery location, so this report contains extensive notes on Middle Mosel Rieslings from von Kesselstatt since that estate is based on the Ruwer. By the same token, the extensive and important Saar Rieslings of Markus Molitor and Nik Weis (St. Urbans-Hof) were already reviewed as part of my coverage of the Middle Mosel, where those estates are headquartered. And, with occasional exceptions I deemed useful, wines I rated 86 points or lower are not reviewed, although I will generally mention those bottles either in my introduction to the grower in question or parenthetically in the course of tasting notes on concern closely related wines. Details regarding the conventions of nomenclature and scoring followed in my reports, including an explanation of when and why I reference A.P. (official registration) numbers, can be found in the introductions to my earlier articles on vintage 2015 and 2014 German Rieslings.