Some years, the advantage of growing Riesling on the Nahe seems amenable to the simple explanation that it is cooler and its season behind the neighboring Rheinhessen or the Pfalz, yet farther advanced than the Mosel. But in the run-up to harvest 2017, local meteorological factors appear to have been more significant than this “Goldilocks” principle. The neighboring Mittelrhein – where fast-draining slate surfaces prevail, and Riesling typically ripens just as late – seems to have been more severely impacted by rain-triggered September rot, but Nahe growers, nonetheless, needed to be strictly selective. The blessing of 2017 was that if vineyards were managed so as to minimize any such impact, conditions after the middle of September proved ideal. “And September is still the decisive month for determining the character of a vintage,” opined Tim Fröhlich, a staunch believer in the significance of a cold snap for building aromatics, energy and refinement in Riesling grapes. “We waited for the weather to turn chilly,” reported Fröhlich, “but we were really very lucky it actually happened, and that our berries were still gold-green and healthy. Had it continued warm and humid for another week, it probably would have been too late to bring in a complete crop of healthy grapes, never mind achieve anything like the quality we did.” Frank Schönleber was far from the only Nahe grower to report that “there simply wasn’t a single day” during a harvest focused on the first half of October “when the weather forced us to take a break.” Whereas in 2016, opportunities for late harvest gave the Nahe an advantage vis-à-vis other Rhine regions, the 2017 harvest here was just as compressed as in other regions, and most growers reported completion of picking in little more than half the time it typically takes. 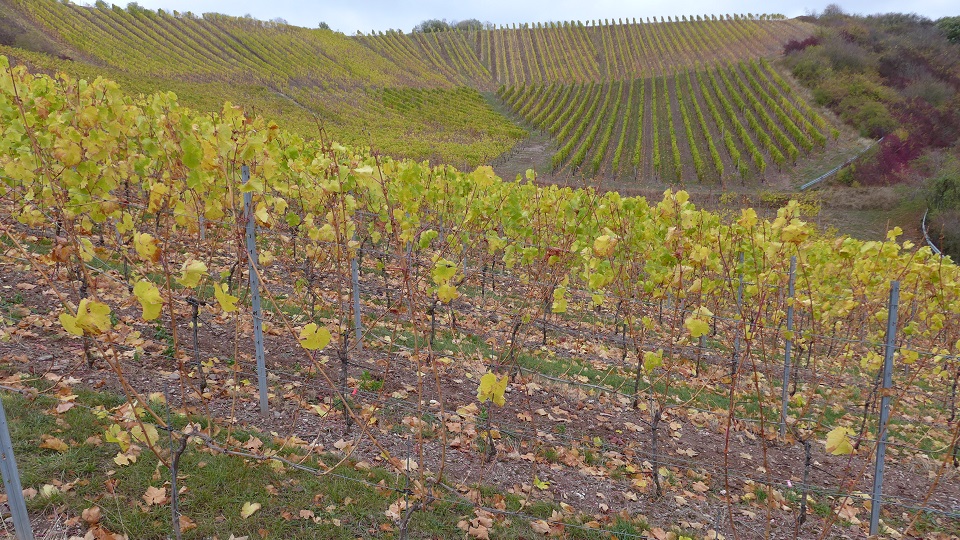 Once again in 2017, the Fröhlich family rendered a memorable collection crowned by wines from the Bockenauer Felseneck, whose slopes were utterly marginalized until this century. A lovely concavity above the Schäfer-Fröhlich winery, at the Felseneck's eastern edge, carries the cadaster name "Bangert," which suggests it once was considered no-account scrub.

Sadly, the early starting date of harvest for most growers was not due only to a warm growing season with just enough rain each time the vines could use it, but also to a small crop trimmed by April frost, which hit the Nahe and neighboring Mittelrhein especially hard. (And as if Nahe growers had not suffered enough from frost, numerous sectors were subsequently hit by damaging late-summer hailstorms.) The immediate effects of frost could at best be slightly mitigated by such expensive, labor-intensive measures as lighting specially designed candles in the vineyards. Helmut Dönnhoff credited that strategy with the salvation of his 2017 crop on the low-lying Oberhäuser Brücke. But as in other parts of Riesling Germany, even high-elevation and steep sites along the Nahe were hit – including places that even old-timers could not recall ever having suffered from frost – and not even a grower with the human and financial resources of a Dönnhoff could hope to proactively protect more than a portion of his or her vineyards. Depending on how low temperatures drop, it takes a minimum of a hundred such candles per acre to have any appreciable effect, and on the Middle Nahe, the temperature dropped to 19°F during the night of April 20, 2017. (To say that the sole major supplier in Bad Kreuznach – to whom growers from the Mittelrhein also flocked – quickly sold out of candles would be an understatement.) 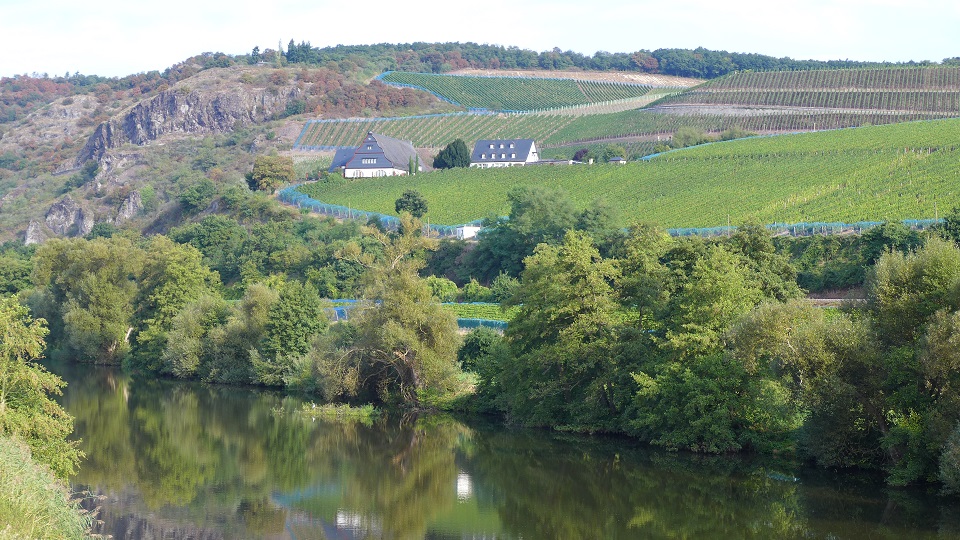 The former Nahe State Domain, now approaching ten years in its second privatized incarnation as Gut Hermannsberg, has finally returned to the qualitative forefront of its region, with offerings from, inter alia, its home vineyards of Niederhäuser Hermannsberg and Schlossböckelheimer Kupfergrube, the latter a former copper mine pit transformed during the domain's 1901 founding.

In extreme cases, such as at Gut Hermannsberg – whose name-giving vineyard is immediately adjacent to Dönnhoff’s Brücke – around half of the anticipated crop was lost. “Frost damage varied enormously from one site to another,” noted Dönnhoff, “but on the whole, it was the best sites that were worst hit, because they had budded out the farthest. And when it comes to secondary buds,” he insisted, “Riesling simply isn’t fruitful. There may be a little wine from new growth but it never achieves the same quality.” Views here differ considerably, though; Frank Schönleber reported that his secondary buds in Halenberg, where a high percentage of the initial buds were damaged, yielded some optimally ripe fruit, albeit still in reduced volume, thanks to the combination of a cooperative subsequent growing season and of picking in multiple passes. But it goes without saying that the determination and wherewithal to farm strategically and harvest highly selectively is present in spades at the top Nahe addresses. 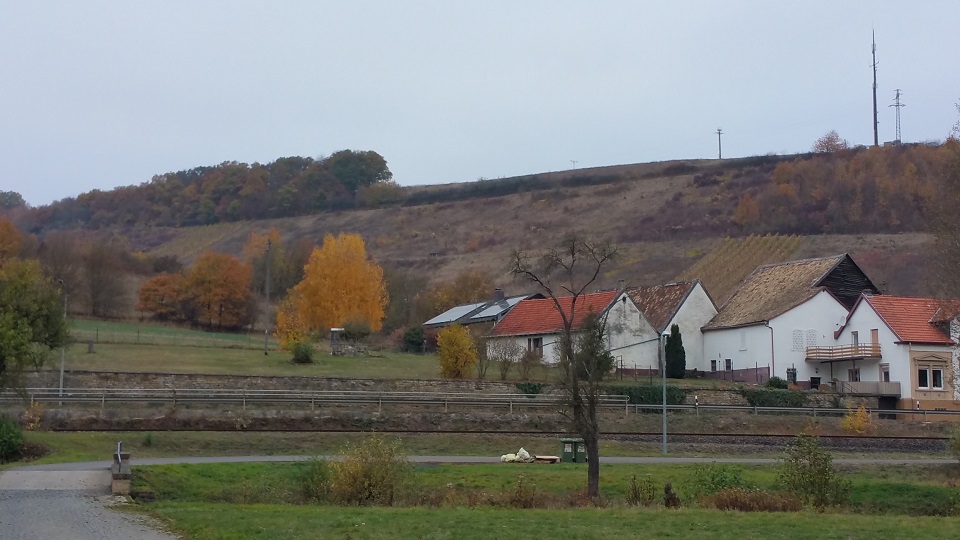 These slopes, like much of the bucolic Alsenz Valley, were saturated with vines until the mid-20th century. Happily, the Linxweiler family at Weingut Hahnmühle deliciously demonstrates what is achievable along this southern tributary of the Nahe whose viticulture was nearly extinguished.

Sheer Talent Will Out

Precisely that familiar concentration of top-flight winegrowing establishments on the Nahe – to which one can nowadays conspicuously add Gut Hermannsberg – proved once again in 2017 to be this region’s decisive advantage. And any Riesling aficionado looking to buy the best (or indeed best-value) wines of any given vintage will with 2017 once again find the Nahe a happy hunting ground, the best bottlings capturing an impressive balance of density with relative alcoholic levity; ripe fruit flavors with minerally, floral and savory elements; and richness with prominent but positive and animating acidity. Nor was botrytis entirely an annoyance; a small number of outstanding nobly sweet wines were achieved. 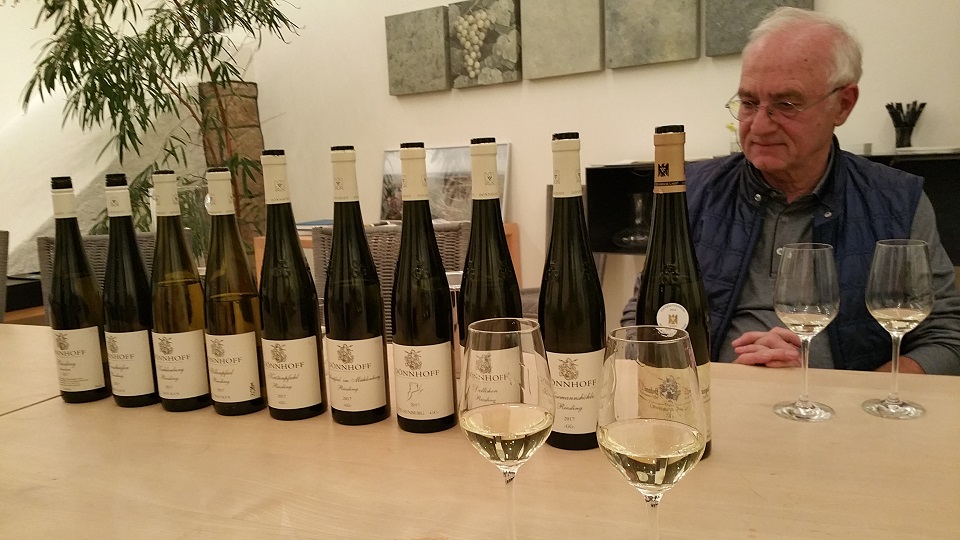 Helmut Dönnhoff is proud of a collection that this year encompasses a record six Grosse Gewächse and a total of ten dry Rieslings.

This report is based on visits with 10 Nahe growers in late October and early November 2018, the early start of harvest having thwarted my normal practice of tasting here in September. (Quite a few grapes were still hanging when I visited, but not enough to interfere with my tastings – and they hung without great urgency, since the weather was stable and chilly.) Following usual Vinous practice, scores on those few wines that I have not tasted since they were bottled are expressed in parentheses as point ranges. Wines I rated 86 points or lower are frequently alluded to but generally not accorded a tasting note. I make exceptions to that rule for wines I still deem good values, or if I think a tasting note will demonstrate some important point (which might be that I think the wine in question is routinely overrated, or perhaps that its latest, disappointing performance requires special explanation). Details regarding the conventions of nomenclature and scoring followed in my reports, including an explanation of when and why I reference A.P. (official registration) numbers, can be found in the introductions to my reports on vintage 2015 and 2014 German Rieslings (the first to have been published on Vinous).

2014 Germany: Riesling Resists Rain on the Rhine, David Schildknecht, May 2016