2015 Beaujolais Part 2: A Vintage of Richness and Energy

The last three vintages for Beaujolais have been a string of home runs, but 2015 is likely to be the one that delivers the greatest impact and pleasure for most wine lovers. Two thousand fifteen has plenty of candidates for wine of the year; wines that deliver concentration and energy, with opulent fruit character and the classic core of acidity that gives Beaujolais its trademark vivacity. These wines are also built to age but at the same time display an exuberance that makes many of them pretty irresistible now.

As I mentioned in the first installment of our coverage of the 2015s, published last August, 2015 is a vintage whose wines mostly managed to take advantage of a warm, and sometimes hot, growing season while avoiding the potential pitfalls of over-ripeness (Beaujolais with a lack of freshness and energy really misses the point of this appellation). While there are some wines that do show the effects of the heat in a not-so-good way, I have been happily surprised by just how many 2015s show real liveliness, delineation and even tension. 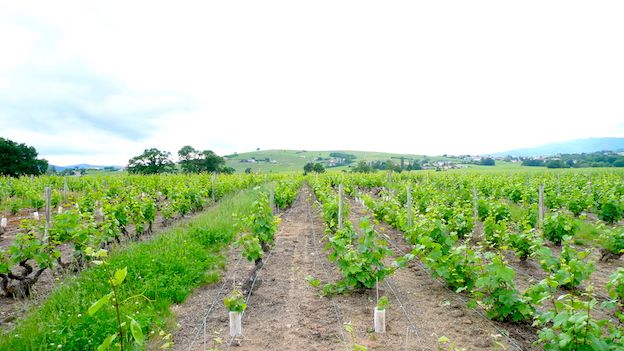 Late spring in 2015 near Brouilly

While few of the 2015s will be mistaken for their 2014 and 2013 siblings - which are classic renditions of Beaujolais, with lightness of touch, crackling acidity and low alcohol levels in the 12.5% range (many 2015s come closer to and even hit 15%) - neither should they be confused with most of the wines from other recent hot vintages like 2009. I’ve had the chance to taste and re-taste hundreds of 2015s since last August and was thrilled to find that my fear that the wines might start showing boozy, warm or loose-knit qualities, or even shut down due to the wines’ structure, were unfounded.

Still, some hard-core fans of traditional Beaujolais that admire the 2014s and 2013s, will be leery of the ’15s on the basis of the dark fruited, concentrated personality of many of the wines. I’m betting that they’ll be in the minority, though, as all reports that I have heard from the market, from producers to importers, wholesalers, retailers and sommeliers, not to mention consumers, is that demand for the wines is brisk and even torrid for the blue chip bottlings. That means, of course, that some of the wines reviewed here, as well as many of those covered back in August, might not be easy to find, but I’m confident that hunting them down is well worth the effort.