While its more famous neighbors have long been on the radar of wine lovers and collectors, Vacqueyras and its wines continue to fly under the radar. That is likely to soon change, especially given the consistently fine value these wines offer and the uniformly high quality of recent and upcoming vintages.

At this point, no one who follows the wines of the southern Rhône Valley needs to be reminded that 2015 and 2016 are epic vintages across the region, with 2017 close on their heels. Now, with yet another outstanding vintage, 2018, likely waiting in the wings, there’s never been a better time to explore this still underrated (and, happily, in most cases underpriced) appellation, whose wines, at their best, can rival top-notch Gigondas and Châteauneuf-du-Pape.

Just how under-the-radar is Vacqueyras in the US? I informally polled over a dozen experienced sommeliers, retailers and collectors over the last year, and none of them could name more than a few producers who are based in or are specialists of the appellation. The good news is that they were able to list a number of Vacqueyras wines made by wineries based in Gigondas and Châteauneuf-du-Pape and, of course, négociant bottlings. Keep in mind that these are people who could probably rattle off 90% of the producers of Cornas, Hermitage and Côte-Rôtie and most of the domaines that work in Crozes-Hermitage and Saint-Joseph, not to mention Châteauneuf-du-Pape and even Gigondas. That’s good news for consumers, as lack of attention tends to keep prices low, but Vacqueyras and its best producers deserve better, especially in the 21st century.

In Vacqueyras, the inclusion of a high percentage of complementary varieties generally gives Grenache a bit more up-front structure in the early going than most other wines in the southern Rhône Valley. Paradoxically, that structure falls off fairly quickly, typically making the wines approachable after just a few years in bottle. The wines then tend to hold up well until age 8-10, although I’ve tasted a number that were drinking admirably as they approached their second decade of life.

While few examples of Vacqueyras are built for long-term cellaring, as is the case with many examples from Gigondas and, particularly, Châteauneuf-du-Pape, they are definitely not easygoing, drink-on-release wines. Also, not many are made in the world-beating, flamboyant, large-scale fashion of a number of wines from neighboring appellations. As such, the best Vacqueyras deliver plenty of satisfaction for wine lovers who crave a more traditional style of southern Rhône wine, with generally lower alcohol levels and modest oak influence. They are also extremely food-friendly, and pair well with strongly seasoned foods as well as lighter fare, especially poultry, which is often overwhelmed by rich, full-throttle wines unless the sauce is up for the battle. I especially like Vacqueyras with mushroom dishes or preparations that involve truffles (when I can afford them!) as the Mourvèdre and Syrah that’s widely used here brings a degree of earthiness to the wines. Think pastas and risottos and you’re on the right path. Full-flavored cheeses are always a great call as well.

2017’s Compelling Wines: Many for Drinking, Many for Holding

Two thousand seventeen is shaping up to be an excellent vintage, if not as epic as 2016 and 2015, which means that the wines are likely to move slowly through the market and, perhaps, even be discounted as importers and retailers make way for the already-hyped 2018s. To say that this is a potential boon for consumers is an understatement.

It was yet another warm year for the region, with drought conditions and predictably low yields of small berries with relatively thick skins. Many wines are marked by relatively full body and obvious tannins. On the other hand, a number of wines, especially the classic bottlings (I hate to call them “entry-level” or “basic”), show an abundance of juicy, forward fruit. I’m inclined to think that quite a few of the 2017s should be enjoyed on the younger side while their 2016 and 2015 siblings are resting in the cellar. The top wines, though, especially those with a Reserve designation, or Vieilles Vignes, are built to last and even bear some comparison to the ageworthy 2015s. 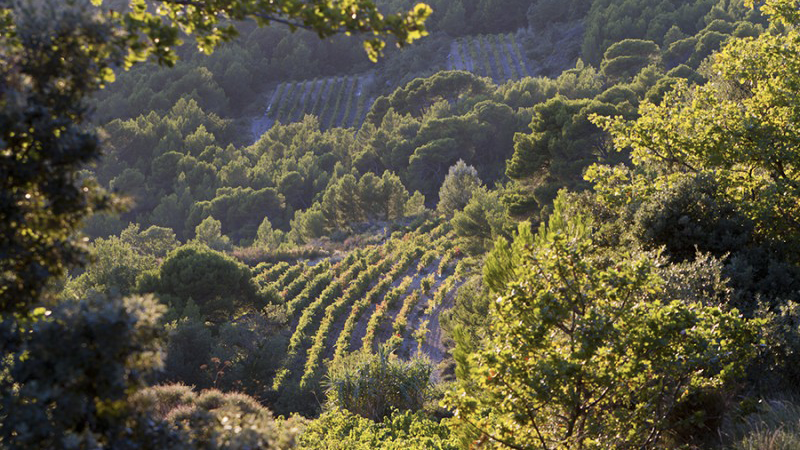 The hilly terrain of Vacqueyras is surrounded by forests and local flora, or garrigue, typical of northern Provence.

As was the case across the southern Rhône, 2016 was a picture-perfect vintage for Vacqueyras. Hotter-than-normal days but also cooler-than-normal nights helped the fruit preserve acidity. The wines have always shown exuberant fruit character, and the tannins are so well-knit that the wines are deceptively forward in character. Their balance, though, makes them ideal cellaring candidates, and I definitely suggest giving the best wines another four to six years of bottle age.

Looking back, I am increasingly convinced 2015 is an epic vintage for Vacqueyras. The wines possess depth, ripeness and structure, along with an inner core of energy and the tannic structure to see them into a decade or more of age. A number of 2015s have shut down a bit, so for now, I strongly advise decanting.

There was not a lot of fruit in 2018, but according to many producers the small crop was of very high quality.  An early look at the wines suggests that they are powerful but impressively fresh and energetic. That bodes extremely well for patient (and not-so-patient) wine lovers. I’ll have a much better handle on the wines after I visit and taste through a broader range in the near future.

For relative newbies who are only familiar with the more famous southern Rhône appellations, an excellent if not obvious starting point for exploring Vacqueyras is wines made by high-end producers from neighboring Gigondas and Châteauneuf-du-Pape, a number of whom have established a foothold here. I would suggest Domaine Montirius for unoaked Vacqueyras bottlings that are consistently impressive, as well as Violès-based Domaine de l’Espigouette, which has long been more famous for its Gigondas than for their Vacqueyras. Domaine Santa Duc, where young Benjamin Gras is doing some of the best work in the entire southern Rhône right now, makes a superb Vacqueyras, as does Domaine la Bouïssiere. Among the standouts in recent vintages has been Domaine de la Charbonnière, especially their Vieilles Vignes bottling, and also Famille Perrin, which has been making top-drawer Vacqueyras for decades now.

On the négociant side, readers are likely to find Vacqueyras wines in worldwide distribution, usually at quite reasonable prices. Delas Frères makes an excellent Vacqueyras that sells for a song, while the long-established, sprawling, Gigondas-based Gabriel Meffre is always a reliable source of high-quality Vacqueyras, especially the high-end Laurus version. Les Vins de Vienne, which is based up north in Chavanay, is getting back into the Vacqueyras game as of the 2017 vintage, and while I haven’t tried it yet, I’ll be surprised if it isn’t really good, given the estate’s standards and resources.

I tasted most of these wines in Spring 2019 during my visit to the region, and the others in New York through the early winter of 2019-2020.

The Riches and Richness of Chateauneuf-du-Pape, Josh Raynolds, December 2019