Domaine de la Biscarelle is located in Grès, which lies in the northern sector of the Châteauneuf-du-Pape appellation. Gérard Bouyer founded La Biscarelle in 1984, after leaving his family’s négociant business to start his own venture. In January 2009, Gérard’s daughter and son-in-law, Christelle and Jérôme Grieco, took over the estate.

The domaine owns five hectares in Châteauneuf-du-Pape. The vineyards are located on the pebbly hills in the northern part of the appellation. Some of the parcels were planted more than a hundred years ago. The rest of the vines are located in the Côtes-du-Rhône area, just across the border from Châteauneuf-du-Pape. Jérôme Grieco is one of the most hands-off winemakers in Châteauneuf. Grieco uses whole clusters and ferments his wines in cement tanks, which hallow him to faithfully capture the expression of these terroirs.

The Biscarelle wines are neither intense nor overpowering; instead they offer very naked expressions of their respective terroirs. The wines are quaffable and tend to show impeccable notes of red fruits, with an added complexity from the use of whole clusters. Of the two Châteauneuf-du-Papes produced by the domaine, there is little question which is the more complete wine.

The straight Châteauneuf-du-Pape is a very traditional bottling in which quite a few varietals are blended. The Châteauneuf-du-Pape Les Anglaises, on the other hand, is made almost entirely from Grenache, which makes a huge difference in style, as it is a bit more exuberant but less complex. The two Vins de France produced at La Biscarelle are typically among the best values in the region.

In France, the wines of Domaine de La Biscarelle represent terrific quality and value across the board. Jérôme Grieco told me he was quite miffed about how expensive some Châteauneuf-du-Papes have become, and that he is determined to keep release prices for his wine at reasonable levels he is comfortable with. 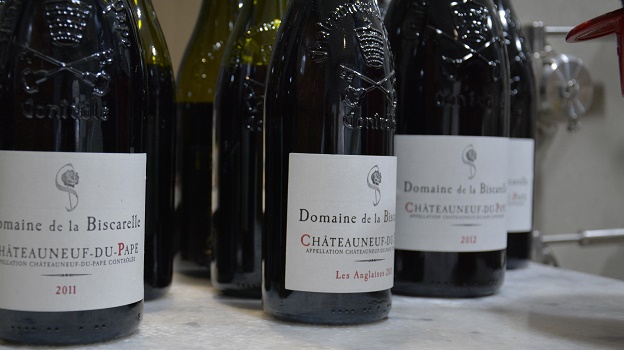 The Vin de France Début d’une Histoire is pure Cinsault, which excludes it from being able to be sold as Côtes-du-Rhône Villages. The wine comes from soils made of clay located in the Bois Feuillet, a district of Orange. The fermentation takes place in cement tanks using whole clusters and lasts three to five weeks. Aging, which also takes place in cement tanks, lasts about six months.

The Vin de France Le Grand Saint-Paul was formerly labeled as the Côtes-du-Rhône Villages. The wine comes from a single three hectare parcel of gravelly soils located in the lieu-dit «Le Grand Saint-Paul» in Orange. The parcel once belonged to the grand-father of a friend of Jérôme Grieco, who used to sell all the fruit to the cooperative. Le Grand Saint-Paul is a blend of 40% Grenache, 40% Mourvèdre, and 20% Syrah. The fermentation takes place in cement tanks using whole clusters and lasts from three to five weeks. Aging takes place in cement tanks.

The Châteauneuf-du-Pape comes from the Palestor and Maucoil lieu-dits, both located in the northern part of the appellation. The soils are composed of pebbles, with lesser amounts of red clay and sand. Mostly made from fifty to a hundred year-old Grenache vines, this Châteauneuf-du-Pape is also blended with a little Syrah, Mourvèdre, Cinsault and Terret Noir. The fermentation takes place in cement tanks and lasts four to five weeks using whole clusters. Aging is done in cement tanks, and lasts six to nine months.

The Châteauneuf-du-Pape Les Anglaises is sourced from the lieu-dit of the same name. The soils here are composed primarily of pebbles, with some red clay and sand. The parcels have a northeastern exposure, and therefore follow a slow maturation. The wine is almost a pure Grenache, with three percent Mourvèdre completing the blend. The fermentation takes place in cement tanks using whole clusters and lasts four to six weeks. Aging follows in cement tanks and can last a bit longer than is the norm with the regular Châteauneuf-du-Pape.

The 2013 Côtes-du-Rhône Villages is a relatively light, quaffable wine, with a purplish hue and similar shades in its lavender, red currant and plum aromatics. Fresh and easy-going, the 2013 is delicious.

The 2012 Le Grand Saint Paul is gorgeous. Nicely balanced, with a rich and complex bouquet and notable freshness, the 2012 kicks in with a layers of blackberry and blackcurrant that  build to the complex, distinctly Provençale finale. The 2012 is also a stunning value.

The 2012 Châteauneuf-du-Pape is an absolute treat. Multilayered and nicely balanced, this beauty displays magnificent notes of fruits, from pure blackberry to mara des bois strawberry, underlined by a delicate acid backbone.This beauty should be stashed away for a year or so, but will be ready for business well before its 2010 counterpart.

Gorgeous and fresh, the 2011 Châteauneuf-du-Pape displays the strengths of this vintage, while keeping a beautiful structure upon which the rich and ample aromatics can build. Its Provençal bouquet is well balanced by fine but present tannins that gently kick back in the finale. This is a superb effort, and is fully ready to drink at present.

The 2010 Châteauneuf-du-Pape is another gorgeous effort, although it clearly needs time in the bottle to truly show its potential. Still, this intense wine displays a lot of riper fruits, with notes of plum, blackberry and red currant, and is underlined by a fresh tone of licorice. Fuller and more introspective, this beauty is set for the long haul.

The 2012 Châteauneuf-du-Pape Les Anglaises, nearly pure Grenache, plays in a different field. This cuvée is at present dominated by an intense licorice quality. I suggest waiting a couple of months to see how it evolves.

On the other hand, the 2011 Châteauneuf-du-Pape Les Anglaises is very nicely done, with plenty of Grenache character. Behind its beautiful notes of licorice and star anise, the bouquet of aromatics presents a good share of red Provençal berries and herbs. It’s ample and long, although not more complex than the regular bottling. A beautiful wine.