Northern Rhône wine lovers whose tastes run to richness and power are going to have a field day with the 2018 and 2017 vintages. While most of the wines tend toward dark fruit character, the best examples also have quite a bit of freshness and energy. That is especially true of the 2018s, which will appeal to readers who prefer a more classic style. 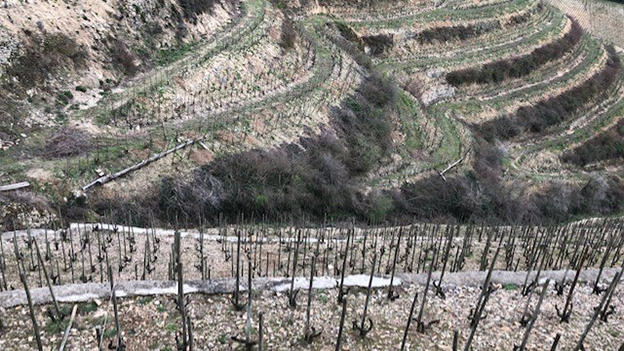 For centuries, the granitic soils of the famed Hermitage hill have produced some of the most complex, ageworthy wines in the world.

Two thousand eighteen was an up-and-down vintage for growers in the northern Rhône. The year got off to good start, with a wet winter that replenished groundwater reserves, on-time flowering and cool weather that allowed for slow, steady maturation. Unfortunately, heavy June rains in the southern sector, particularly at Cornas, brought on mildew, which resulted in crop loss in some sites. At the end of June, the weather took a sharp turn to sunny, dry and hot conditions, which accelerated ripening.

Because of the kick-started ripening in July and the hot weather that followed, many producers opted, or were forced, to pick their fruit on the early side, at the beginning of September and in hot weather. A few of the producers I visited mentioned that in 2018 phenological ripeness in many cases wasn’t fully attained until the fruit reached about 14.5% potential alcohol, while in the past, it was generally achieved when the grapes hit anywhere from 12.5% to 13% potential alcohol. 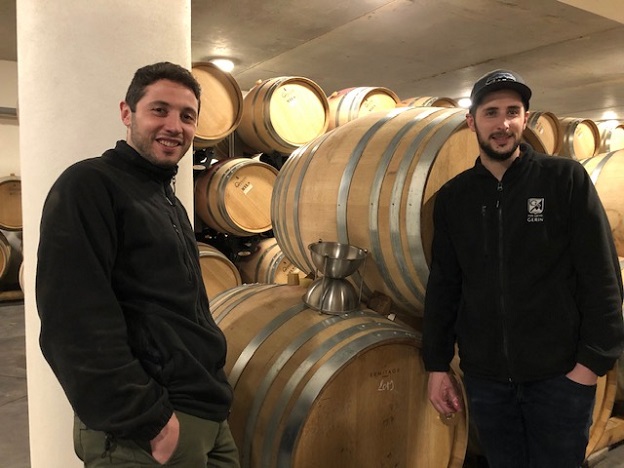 Tasting in the cellar with Alexis and Michael Gerin of Domaine Jean-Michel Gerin.

There was the obvious danger of dropping acidity levels and rising pHs, and, as many vignerons pointed out, the fruit components of the wines’ aromatic and flavor profiles, while energetic in character, do lean toward more dark character than red, even in Côte-Rôtie. Yields were generally healthy across the region, especially in Côte-Rôtie and in the northern sector of Saint-Joseph, where quantities were robust and sometimes even on the high side, which also likely contributes to the wines’ energy. Still, based on what I saw during my extensive cellar visits during the first two weeks of March, roasted qualities and flabby textures were rarely to be found, which was a pleasant surprise.

Thick skins meant healthy tannins, possibly even excessive, if growers didn’t keep an eye on their vine canopies. Those tannins have given the wines good structure, which should help them age well, even if the wines’ juiciness will make them deceptively approachable, which is by no means a bad thing. I imagine that plenty of wine lovers will enjoy the 2018s pretty much right out of the gate, but in most cases, they are definitely worthy of patience, even just a little. 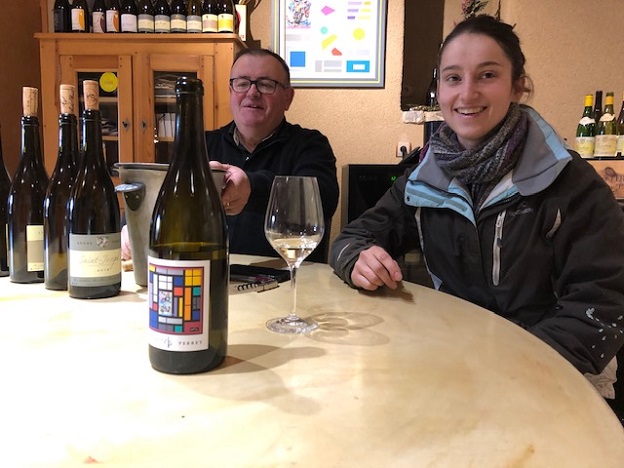 Running through new releases with André and Marie Perret of Domaine André Perret.

I generally found more vibrancy to the 2018s compared to their 2017 siblings, and more weight than the 2016s (which, by the way, are starting to show their elegant side more and more lately). In 2018, a number of producers who use whole clusters upped the percentages, as the heat ensured ripe stems, thus mitigating the possibility of too much green character in the final wines. Those stems, numerous producers pointed out, help to maintain freshness, not to mention bringing greater aromatic complexity. I’m seeing more and more producers, especially the younger generation, making increased use of whole clusters, and it’s a trend that I can happily get behind. 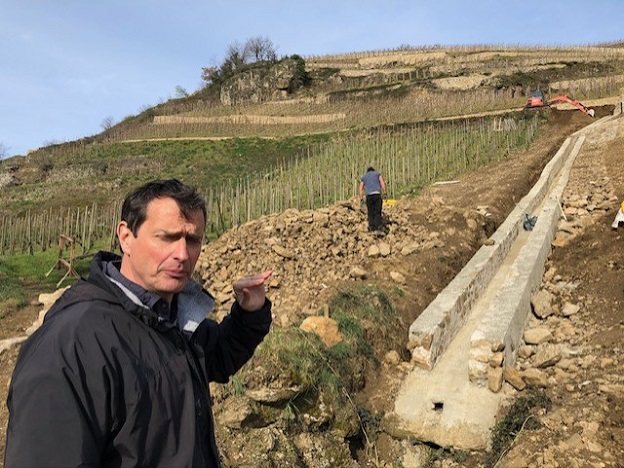 Trials and Triumphs of 2017

Most of the 2017s I tasted this past March were powerful while at the same time fresher than I expected going in, based on last year’s barrel tastings. This was a vintage that, in some appellations, especially in the southern sector, experienced a short crop mostly because of hot weather and drought conditions. In many Cornas vineyards, production was off by as much as 50%. Things were quite a bit better up north, at Côte-Rôtie and in its neighboring Saint-Joseph communes, where fruit was clean and crop levels were healthy.

Compared to the vintages that preceded it, I find the 2017s to be distinctly weighty, showing on the ripe side (but not excessively so), with dark fruit character supported by clearly present but not extreme tannins. The wines typically carry relatively high pHs, have softer acidities than usual and are brawnier and rounder than the 2016s, while possessing less structure and strict tannins than the 2015s. More than a few producers call the vintage a hypothetical cross of 2016 and 2015, which I can understand. I’m confident that most of the 2017s should be enjoyed before digging seriously into the 2015s. 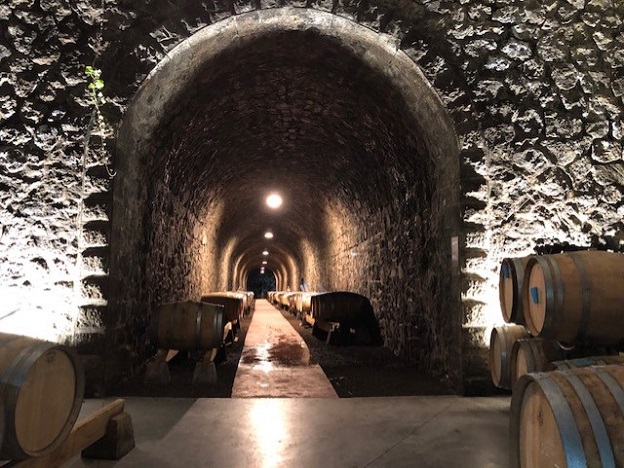 Northern Rhône and the Market

Prices for the most sought-after wines of the region have been increasing, often exponentially in recent years, and show no signs of slowing down. A number of wines now command prices, especially in the secondary market, that approach and even surpass the level of many Grand Cru Burgundies. While that’s unfortunate for name-brand-motivated buyers, the good news for the average consumer, and that includes me, by the way, is that there’s an abundance of wines that sell for very reasonable prices for their quality, even from Côte-Rôtie, Hermitage and Cornas, where a number of the best wines that I tasted from the 2017 vintage can be found for under $100 a bottle and sometimes significantly below that. Plus, the game is rapidly changing in Saint-Joseph and Crozes-Hermitage, where a number of producers are now making superb wines that can be had for around $50 and often much less. When one takes the collector’s-item wines out of the equation, the northern Rhône offers myriad choices of outstanding wines that are very fairly priced for what they deliver. 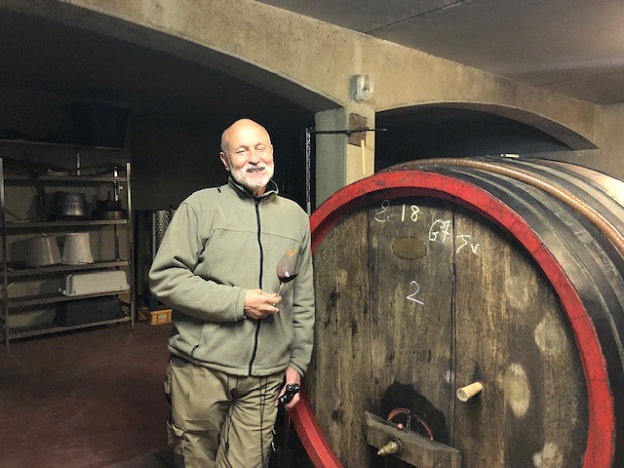 Most of the producers that I visit in the region operate on a very small scale, with most of the vineyard work conducted by family members, often with just a few full-time vineyard workers and cellar assistants. The amount of wine that these domaines produce is minuscule, with many single-vineyard bottlings being made in quantities of 100 cases and often less than that. Unfortunately for consumers worldwide demand for the wines here has exploded over the last decade, meaning that a number of these small-production bottlings are extremely hard to track down. Predictably, this has caused prices to move steadily upward, often dramatically so, with many wines selling the price of Grand Cru Burgundy and even First Growth Bordeaux. On top of that, there’s the bad news for U.S. wine lovers that a huge chunk of the wines reviewed here carry the new 25% tariff that was imposed on most of them this past winter. It will be interesting to see how this all plays out as the world grapples with COVID-19.