While wine collectors and much of the wine press consistently focus their attention on the elite growing regions of the southern Rhône Valley, namely Châteauneuf-du-Pape, Gigondas and Vacqueyras, the vast majority of the region’s wines come from less-sexy locales. Not surprisingly, these bottlings are almost always priced more gently than their fancy, better-known cousins. Best of all, in many instances they offer stunning value.

As is the case throughout the southern Rhône, Grenache rules in blends, with percentages of the variety often far greater than the minimum required (typically 50%) by their respective appellations. At the same time, many of these vineyards experience cooler and often longer growing seasons than other areas, namely Châteauneuf-du-Pape, so they rely more heavily on the late-ripening Mourvèdre and Syrah. Maximum permitted yields are also higher than they are in the marquee appellations.

The result, as might be expected, is wines that are usually less opulent than those from the luxe neighborhoods, with lower alcohol levels and typically less complexity and ageworthiness. That’s great news for the vast majority of consumers, as most of these wines are drinkable on the young side, if not immediately upon release, even if the best examples will reward some cellaring. These wines are frequently bottled within a year of harvest, which means that a number of 2015s will soon be reaching export markets. 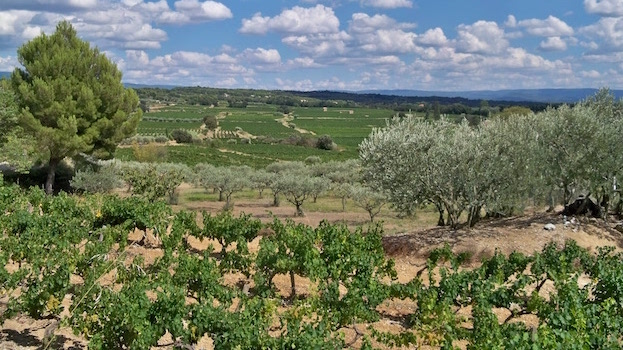 The best wines covered in this article come from appellations that have been awarded AOC status—now also called AOP (Appellation d'Origine Protégée), in accordance with EU standards, but old-timers like this writer are having a tough time making the bureaucrat-mandated language changeover. While there are a number of excellent wines being made that bear the simpler Côtes-du-Rhône Villages moniker (especially those from Sablet, Séguret, Valréas and Plan de Dieu), the overall standard of wines that have won AOP recognition (commonly called “crus”) are usually—or at least should be—of higher quality.

Of additional interest is that many of these wines are made by producers who are based in the big-time appellations, which means that these wines benefit from the care and attention that well-heeled, conscientious vignerons are able to lavish upon them. Of course, many extremely serious and talented growers and winemakers operate exclusively within the so-called “lesser” appellations covered in this article and even though their work doesn’t grab the attention given to their colleagues in the big three areas, it can often be at a similar level of dedication.

Situated well to the cooler north of most of the Southern Rhône’s growing areas, Vinsobres produces wines that often contain a healthy dose of Syrah, and they show it. The mandated blend here requires 50% Grenache, at least 25% Syrah and/or Mourvèdre, and the balance Cinsault, Carignan, Counoise, Vaccarèse, Picpoul Noir and Terret Noir, as well as permitted white varieties, which include Clairette, Clairette Rose, Grenache Blanc, Grenache Gris, Bourboulenc, Marsanne, Roussanne, Picpoul, Ugni Blanc, Viognier and Muscardin, but white grapes cannot make up more than 5% of the final blend.

Lying just south and west of Vinsobres, this appellation’s wines usually tend to the ample, muscular side thanks to their Mourvèdre and Syrah components. In my experience they also age quite well—at least as well as most examples of Vacqueyras. A minimum of 50% Grenache is required for the wines, with at least 20% Syrah and/or Mourvèdre and no more than 20% Carignan and/or Cinsault and Counoise allowed in the blend. 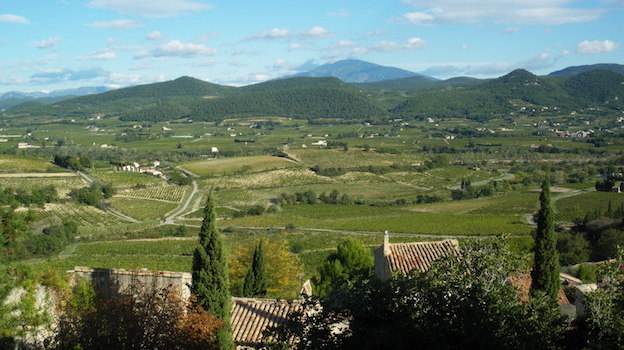 This appellation, which lies just north and west of Gigondas, was only elevated to AOP status this year, so any wines currently in the market will still be labeled Cairanne Côtes-du-Rhône Villages. As with Rasteau, the wines must contain a minimum of 50% Grenache and 20% Syrah and/or Mourvèdre, with no more than 20% of Cinsault and/or Carignan and Counoise. Generally speaking, the wines are more graceful and racy than those of Rasteau and bear comparison to Vacqueyras, with perhaps a bit less structure. 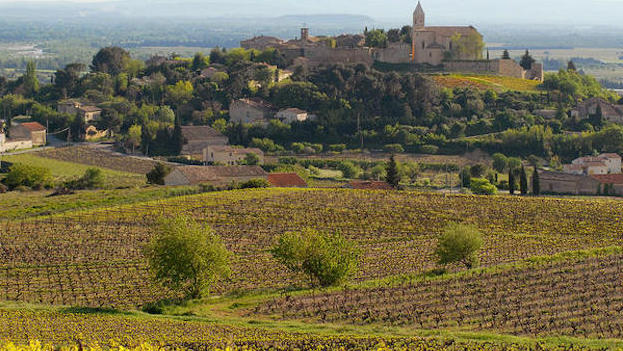 Bucolic Cairanne as seen from its vineyards

Situated close by Vacqueyras, to its south, Beaumes-de-Venise produces generous, nicely structured wines based on at least 50% Grenache and 25% Syrah, with the balance made up of other varieties, usually Mourvèdre but with the other usual suspects, whites as well as reds, also permitted, as at Vinsobres. The sweet Muscat Beaumes-de-Venise wines, which are becoming tougher to find in export markets, are made from Muscat à Petits Grains. In the past some versions were lightly fortified but virtually any rendition one might run across today is made without any alcohol added. 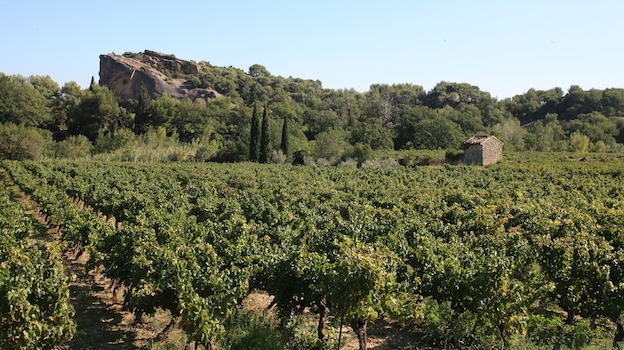 Fans of Châteauneuf-du-Pape will find plenty of interest in Lirac as a growing number of Châteauneuf producers have taken positions here. Lying just across the Rhône river, slightly west of Avignon, with soils quite similar to those at Châteauneuf, Lirac’s wines tend to be fleshy and ample, with forward fruit and gentle tannins that make for early appeal. There’s a minimum of 40% Grenache required here, along with at least 25% of Mourvèdre and/or Syrah and a maximum of 10% Cinsault and/or Carignan.

All of the wines allowed to bear the Tavel name are pink, so the term “Tavel Rosé” is redundant. Classic Tavels are full-bodied as pink wines go, and they also age surprisingly well, as bottles more than 20 years old have often proved to me. Grenache is the dominant grape used here, with Cinsault, Syrah, Mourvèdre, Carignan and Calitor permitted, along with the white Clairette, Clairette Gris (or Rose), Bourboulenc and Picpoul varieties.

I tasted the wines reviewed in this article in late winter and spring in New York.