The Deep Bench of Gigondas

Like the rest of the Rhône valley, and Europe, Gigondas has been confronting hot, dry weather conditions since 2017. Luckily, the best, most experienced growers and winemakers have handled the situation with a steady hand. Still, there’s no question that many wines from recent vintages are distinctly powerful, often high in alcohol, with more dark fruit character and tannic structure than usual.

Gigondas wines can show distinct elegance, even complexity on the young side, which is a big part of their appeal compared to quite a few of their neighbors. Lofty percentages of high altitude-grown Grenache, from relatively cooler conditions, are undoubtedly the leading factor for these characteristics. Producers here tend to lean on large, usually neutral oak foudres and large concrete vats for raising their wines; both vessels are ideal for retaining freshness. They are also essential for making Grenache, a highly oxidative variety that usually doesn’t take well to small barrel treatment in the cellar. 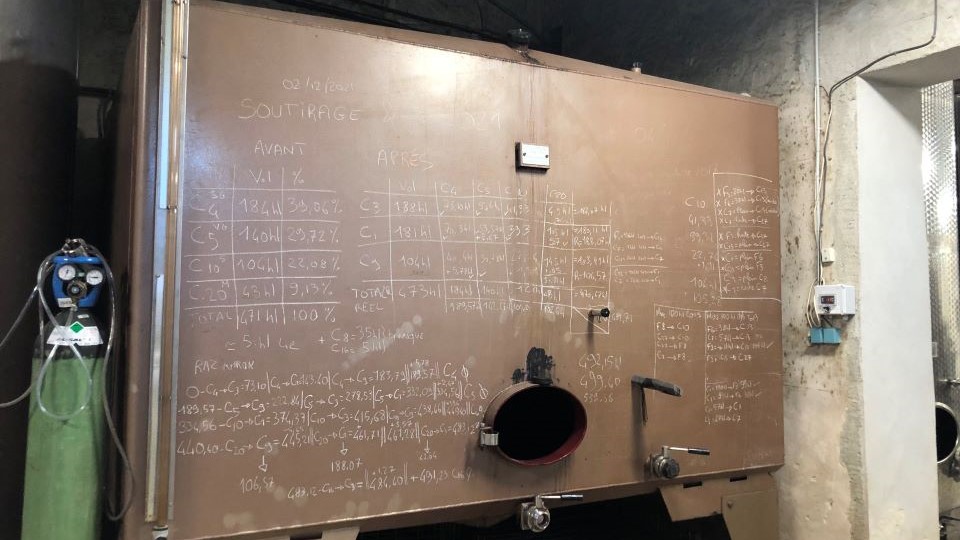 Some seriously involved winemaking calculations on an old tank at Raspail-Ay, one of the most storied domaines in Gigondas.

While a handful of producers can command high, even very high, prices for their tiny production, single-site or prestige bottlings, the overwhelming majority of Gigondas fall comfortably under $50 a bottle. Numerous outstanding wines come in below $30 as well. The average quality standard for Gigondas is remarkable, regardless of the prices asked, which is all the more impressive. A handful of wines can show a rustic streak, especially if their blends are high in Syrah and/or Mourvèdre. However, sloppy winemaking, obsolete cellar equipment, dirty working conditions and dodgy barrels are now true rarities here.

A significant reason for the uniformly high quality of wines produced here is the relatively small and very tight community, with a very active producers association. Most producers live in the village, and many others live nearby in Vacqueyras, Sablet, Rasteau, Beaumes-de-Venise or Violés, rarely more than ten minutes away. Slacking off is noted in such a small setting, and nobody wants to be “that person” in a village with so many high-quality and increasingly famous producers. Secondly, increased demand, and the pricing that follows, has allowed domaines to invest in better equipment, especially presses and modern bottling lines. The younger generation of winemakers is highly educated, and most are quite well-traveled. Gigondas producers know where they stand on the wine map. They know how they want to be perceived in the world market and are ambitious and competitive.

Gigondas selections continue to be among the best values in high-quality, small-production, domaine-bottled wines in all of France. That’s particularly clear when one compares them to the tariffs that most wines from Châteauneuf-du-Pape have long commanded. Taking the handful of super-luxe, limited-edition, mega-old vine Gigondas out of the discussion, it amazes me just how much wine one can get here for the prices charged. Fortunately, importers around the world have taken notice, and more and more Gigondas bottlings are becoming available worldwide, specifically in the United States. Gigondas delivers some of the best bang for my buck in cellar-worthy red wines from France today. 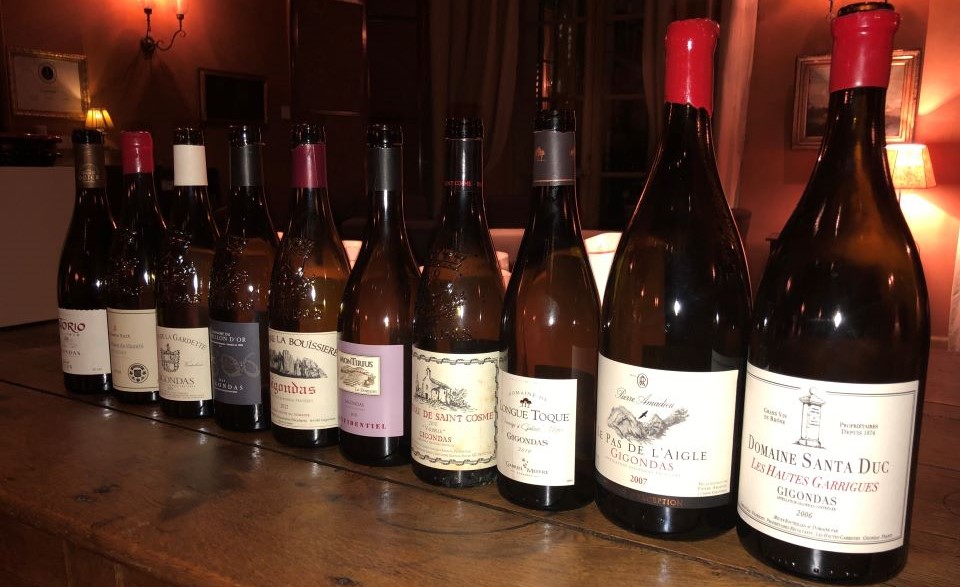 An impressive display of old, young and in-between Gigondas from many of the most esteemed producers in the appellation. Does Gigondas age? This collection said, “oh, yes.”

I had the opportunity to sit down and taste a few older Gigondas (1990 Raspail-Ay, 1989 Saint-Gayan, 1972 Pierre Amadieu Romane-Machotte and 1971 Cayron) when I visited the region this past June. All the wines came directly from the producers’ cellars and had not been moved since they were laid down in bins immediately after bottling; thus, there was a definite home-field advantage. Admittedly, these bottles were hand selected, but I was surprised, if not floored, by how gracefully they had aged or were still aging. And we’re talking about wines from an era when cellar practices were far less efficient and, let’s face it, less clean than they are today. Regarding age-worthiness, Gigondas wines can be enjoyed soon after release but have the depth and balance to mature with ease. 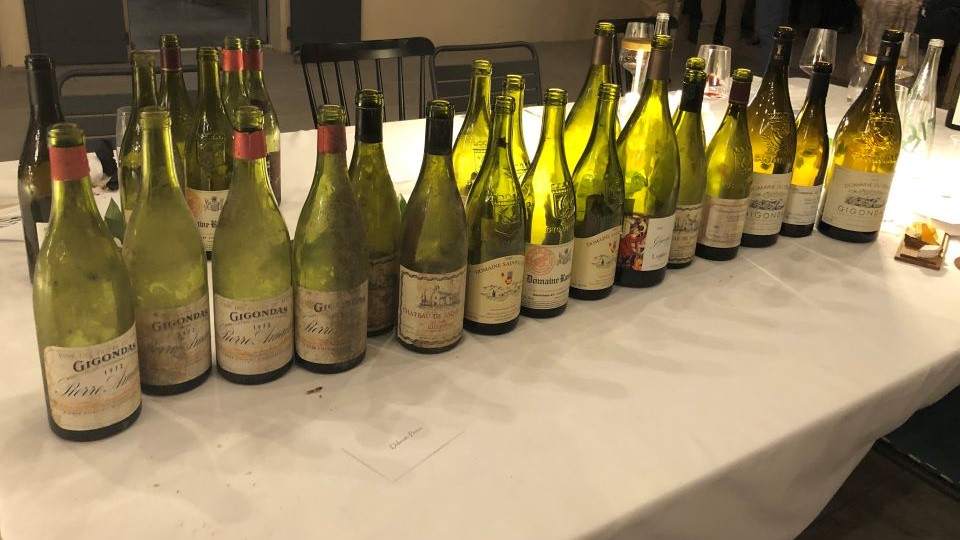 A once-in-a-lifetime tasting of iconic Gigondas that offered examples back to 1970.

In 2021, the high-altitude, steeply sloped vineyards of Gigondas, where the vines don’t usually awaken until mid-April, were relatively unaffected by the frosts that slammed so many regions across France - on April 8th, in this part of the country. But there was often serious damage in the lower, earlier flowering sites, those on the roads leading up and into the village, meaning as much as 50% crop loss in some spots. The spring that followed was cool and rainy, and maturity loped along at a languid pace, some two weeks behind average. The summer saw moderate temperatures, with no heat spikes, followed by often heavy rains in early fall, leading up to harvest. Choice in the vines was essential because of rot pressure. The resulting wines, from a shorter crop than normal, tend to reflect the cool and damp growing season as they show bright, nervy fruit that leans to the red side, a relief for those who found the earlier three vintages more brawny and dark-fruited than they might prefer. This will be a very interesting and probably wildly diverse vintage to dive into now that many of the wines have been bottled or soon will be and, hopefully, will be resting, safe and cool, in foreign warehouses by the time the weather starts to heat up in May. Or is it April now?

Compared to 2019 and 2018, 2020 produced many wines that show real freshness, energy and detail, with fruit that leans more into the classic red and sometimes blue sectors of the color, aroma and flavor spectrum. By contrast, a large number of 2019s and 2018s (and 2017s, for that matter), start off at blue and move toward the black spectrum, even really black. These are not wines that are likely to sway fans of racy red wines, who usually have no time for Grenache in any form, but they stand out compared to the previous three vintages. Two thousand sixteen comes to mind as a fair comparison, and they are far less strict than most, if not all, the super-structured 2015s. That said, the best 2020s do have more than adequate depth and occasionally solid, moderately tannic spine. Those tannins should begin sliding away before long, and even now, the best wines show a lot of friendly, bright, fruit-driven character, with strong florality and spiciness that will make many fans quite happy. 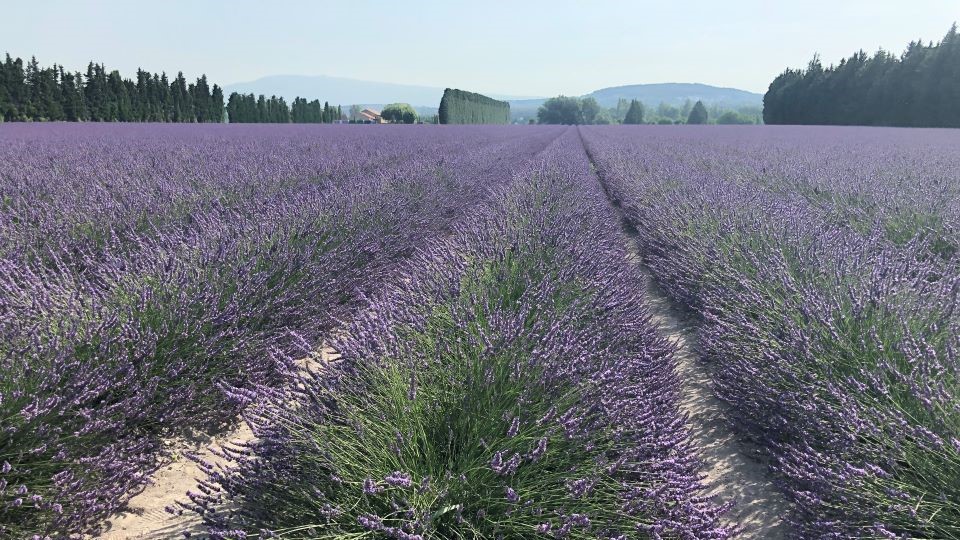 Sprawling lavender fields appear throughout the region surrounding Gigondas, from here to the south.

At least by historic standards, 2019 was yet another dry, scorching hot vintage for Gigondas. By today’s measure, however, it’s the type of year that has become more common than not. I prefer the 2019s to their 2018 siblings, which tend to be even richer. Spring was very warm and dry; the weather turned hotter up to and through summer, with three severe heat spikes that spurred sugar development. Fortunately, acidity levels stayed uncannily high for such hot and dry conditions, which has helped the wines to sometimes surprise with their energy. Still, it's highly unlikely that Pinot Noir lovers will convert their cellars to giant bins of Grenache if they spin through the 2019s!

The Gigondas 2018s are the product of a hot and dry year, and the wines show it for the most part. Those growers who own vineyards up in the Dentelles mountains suffered less from the day-time heat than others, not to mention that these high-altitude sites experience predictably cool and even cold nights. Those factors saved many a wine in 2018 (and 2019 and 2020, as well, and a whole lot of other recent years and more to come, no doubt). These are wines that tend to be broad, weighty, expressive and loaded with mostly dark fruit character. But there are several examples that lead with blue and even red fruit, if not of the redcurrant, cranberry, pomegranate or strawberry sort. It would be a shame to miss out on quite a few 2018s, given how their rich fruit is buffered by floral, spice and mineral character, all of which combine to make for some compelling drinking.

I tasted most of these wines during my trips to the Rhône in April and June 2022. The rest were sampled here in New York.

© 2023, Vinous. No portion of this article may be copied, shared or re-distributed without prior consent from Vinous. Doing so is not only a violation of our copyright, but also threatens the survival of independent wine criticism.