Readers who enjoy Beaujolais need to stock up on the best 2014s for both immediate enjoyment as well as for cellaring. And there are many more of these top choices than usual in 2014. Stylistically the wines bear comparison to classically proportioned vintages such as 2010 and 2011, with abundant fresh fruit as well as depth and structure, all working smoothly together. Simply put, even if one takes into consideration the recent run of strong vintages—2009, 2010, 2011, 2013 and, almost certainly, 2015—2014 might turn out to have produced the most consistently outstanding group of Beaujolais since the legendary 2005s, which is saying something. That’s especially true for readers who prize the classic style of Beaujolais that emphasizes energetic fruit and mineral character, qualities the ‘14s possess in spades.

A quick start to the growing season and a successful early flowering set the stage for a healthy crop. A cool summer ensured the preservation of lively acidity in the grapes. The weather warmed up considerably, but not excessively so, in early September and the fruit responded with vigor, ripening quickly but not overnight, as can happen in truly hot years. There were no climatic events during the harvest other than a bit of scattered hail to stress out the growers, who were able to pick healthy fruit slowly and methodically. 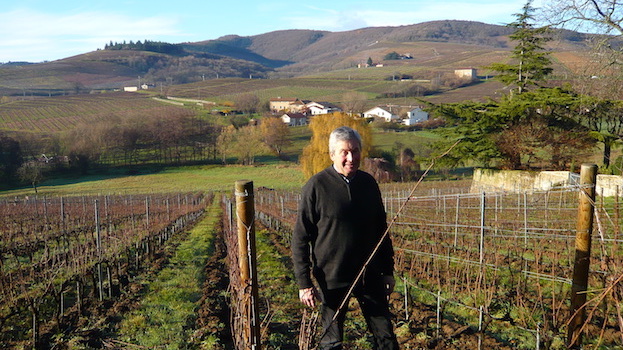 Claude Geoffray in the vines behind his family's Chateau Thivin, in Cote de Brouilly

At its best—and I’m hard-pressed to think of a vintage with such a high percentage of outstanding wines in recent years—the 2014s exhibit lively berry and floral character punctuated by zesty minerality. The wines are concentrated yet not heavy, and show good structure without coming off as outsized. Many producers I visited in June described the wines as a hybrid of the 2010s and 2011s, combining the structure of the earlier vintage and the fruit intensity of the latter. As such, the 2014s, as a group, are hugely appealing right now but I have no doubt that they will reward another three to five years of aging. Many of the brawniest 2014s have the material to see them through a decade or more of life but by that point they’ll have little resemblance to most peoples’ notion of Beaujolais, so I’d advise drinking almost all of the ‘14s before they hit their tenth birthday.

The Current Market for Beaujolais

Demand for the top wines from the most famous producers is hot right now. But with 2015 looming, which looks to be another superb vintage, albeit in a richer, weightier, distinctly riper style, one has to wonder just how much great Beaujolais the market can absorb. The question on the minds of more than a few producers right now is “which excellent vintage, 2013, 2014 or 2015, is going to fall between the cracks?” Granted, many fans of the 2013s and 2014s will find a high percentage of the 2015s to be too much of a good thing. But I suspect that many enophiles whose tastes run to fleshy, ample wines will be chasing the ‘15s, while partisans of more graceful Beaujolais will continue to snap up the 2014s and 2013s, which might help to smooth out demand. 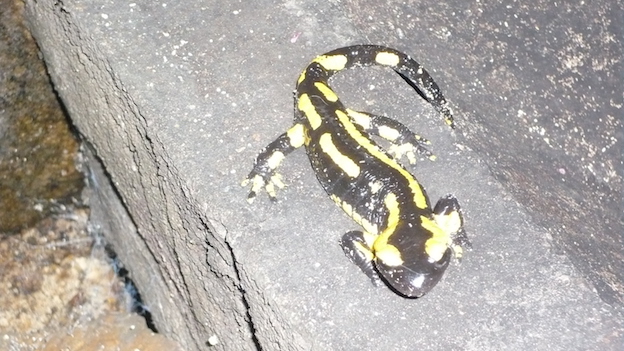 This particular, exotically colored breed of salamander settles into the cool, damp cellars of Beaujolais during hot weather

On the other hand, the Beaujolais region produces a large amount of wine and while many of the elite producers are able to choose their customers and play the allocation game, the majority of small Beaujolais vignerons don’t enjoy that luxury. Sales and prices for much négociant Beaujolais have slipped in recent years, and numerous growers have seen that outlet for their fruit and wine begin to dry up. In many cases, their financial situations have become downright dire. The result? Except for a relative handful of cult estates, prices for the majority of wines that would interest Vinous subscribers are often ridiculously low given their cost of production, which is great news for consumers but not so good for estates that own just a few hectares of vines.

I tasted the majority of the wines reviewed in this article during my annual visit to Beaujolais in June and the rest in New York in late spring and early summer.