Châteauneuf-du-Pape Reds: The Flamboyant 2014s and the Structured 2013s

Wine lovers who gravitate toward structured Châteauneuf-du-Papes are going to be thrilled by the style of the 2013s, while those who are drawn to more flamboyant, fruit-driven, immediately approachable wines are likely to prefer the 2014s. In fact, the personalities of the two vintages are so different that I can imagine fans of one vintage almost completely dismissing the other, even if the actual differences between the two sets of wines are not generally as extreme as some might think. 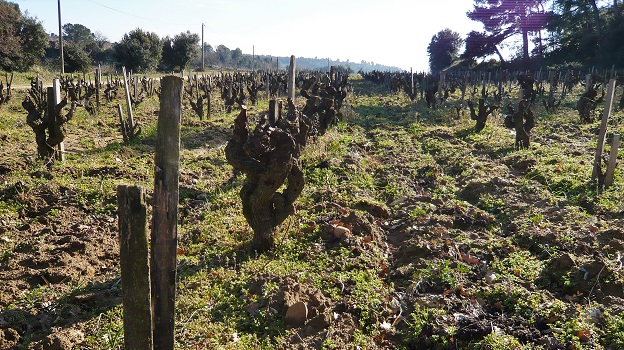 Grenache vines in the heart of the village

The growing season of 2014 got off to an auspicious start with warm early-spring weather but was quickly slowed down by a cool, damp late spring and summer. Growers’ spirits were brightened when the weather turned dry and warm, but not hot, in late summer and stayed that way through a late harvest by modern-day standards that extended into mid-October for some vineyards. Acidity levels remained healthy and sugar levels moderate due to the lack of serious heat, which ensured freshness. The protracted harvest yielded mature, healthy grapes and wines with ripe, juicy dark red berry character supported by harmonious tannins, all of which should give the wines considerable early appeal. 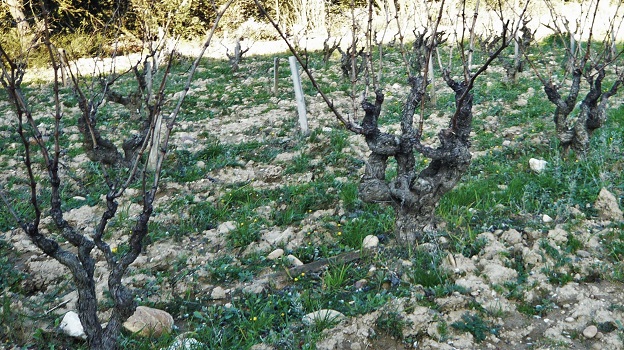 By contrast, 2013 began with a miserably cold, rain-plagued spring. Temperatures rarely exceeded 40 degrees Fahrenheit through May. Grenache, in particular, had difficulty flowering and the resulting fruit set was down dramatically, especially in younger vines. A warm summer and fall allowed the harvest to take place under very good conditions but the damage had already been done, yield-wise. Sophie Estevin and her sister Catherine Armenier of Domaine de Marcoux, which has an abundance of old Grenache plantings, told me that their overall yield in 2013 was barely 12 hectoliters per hectare, resulting in total production of less than 12,000 bottles of a single classique bottling. Since the Grenache shortage meant that there wasn’t nearly enough fruit, said Estevin, they couldn’t justify making their celebrated Vieilles Vignes cuvée “no matter how high the quality of the wine.”

The shortage of Grenache was a recurring theme throughout the southern Rhône Valley during my two-week visit in February. If producers who typically lean heavily on Grenache for their blends wished to make wines according to their usual formulas in 2013, a choice had to be made. Either they could stick close to their usual recipe and accept the fact that production would be lower owing to the short Grenache crop, or they could increase the proportion of other later-ripening varieties in their blends. While I can’t say that I have tried a lot of 2013s that stray far from most producers’ house styles, many of the wines from this vintage do show more structure and darker fruit character than usual, especially those wines that contain a healthy dose of Mourvèdre.

The best 2013s are built to age, thanks in no small part to the often higher percentages of late-ripening varieties, notably Mourvèdre, that are included in the wines. Then there’s the fact that many producers, as mentioned above, opted to blend the fruit from their oldest vines into a single “basic” bottling, resulting in Châteauneufs that are in many cases more structured and higher in acidity than usual, Grenache being a low-acid variety. That bright acidity actually gives many of the wines early appeal for their freshness, but there’s a backbone to the best wines as well, which makes many ‘13s solid cellar candidates. Generally speaking, my inclination would be to dig into most of the 2014s before—and sometimes even well before—the majority of the 2013s. 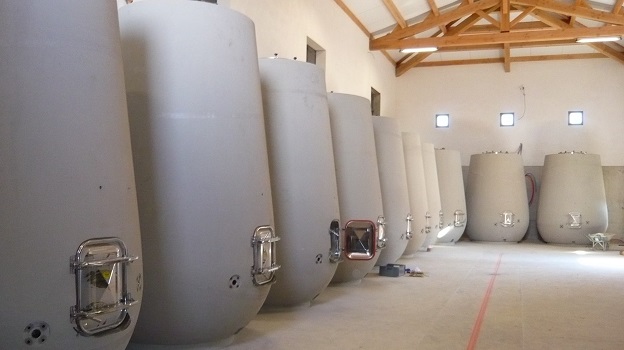 Grenache is a variety that, when picked underripe, can be anywhere from boring to unpleasantly green. Grenache wants to be ripe, which is why it has found a home in Provence, and ripeness for Grenache means somewhere around 15% alcohol and often higher. Even the most graceful, balanced Châteauneufs will still be substantial, warm, deeply fruity wines compared to, say, red Burgundies or Barolos. So when I make reference to “relatively delicate,” “elegant,” “lithe” or “light on its feet” in my tasting notes, I am not suggesting that these wines be used at the dinner table as Pinot substitutes. These are strictly relative terms when it comes to Châteauneuf-du-Pape. 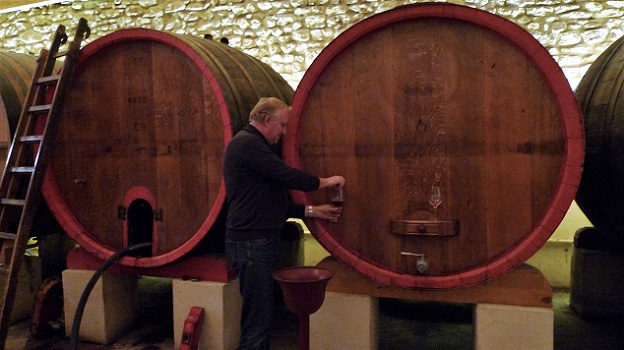 Vincent Avril in the cellar at Clos des Papes, where the red wines are aged exclusively in large foudres

On The Subject of Drinking Windows

Long-time Châteauneuf lovers may be puzzled by many of the drinking windows that I propose, which I can understand. I have enjoyed more than my fair share of Châteauneufs that were cruising along comfortably into their third and even fourth decade of life (the 1978s, for example), but my experience also tells me that most examples are at their best somewhere between their 8th and 12th birthdays. Beyond that, the wines’ fruit can begin to fade or to become overwhelmed by the often lofty alcohol component that marks so many wines of the southern Rhône, especially in hot vintages like 2007, 2003 and 1998. While I love the complexity that can only come with patient cellaring, given the choice I much prefer to catch my wines on the way up than on the way down.

I tasted the vast majority of the wines reviewed in this article during my visit to the southern Rhône in February, the rest in New York during late winter. Because of the large number of wines in this article, a separate piece on the white wines of Châteauneuf-du-Pape will follow next week.