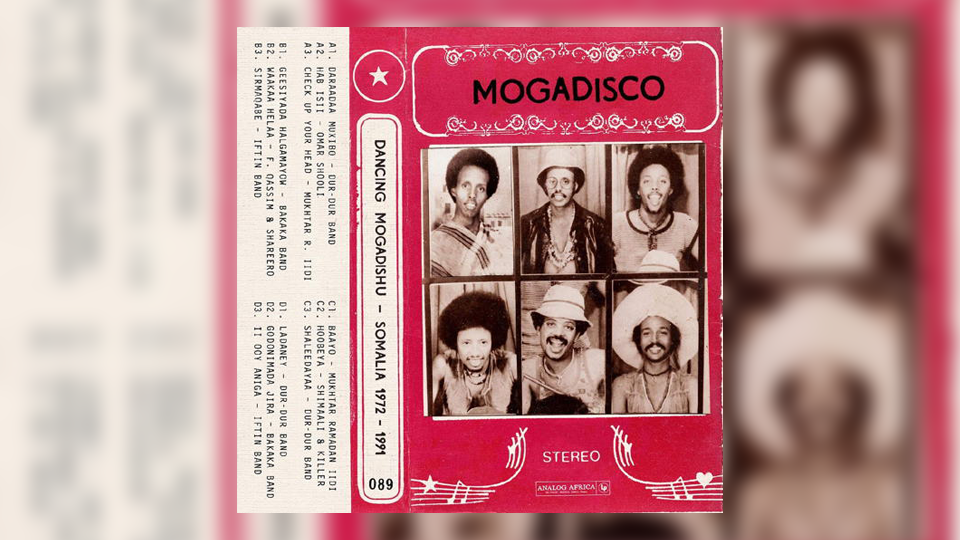 Since introducing my album recommendations, I have followed a self-imposed rule that the albums had to be new – no compilations. Over 17 years I have only broken that rule once. The 2004 compilation of Candi Staton’s early recordings on the Fame label is so awesome that I had no choice but to break my vow. Now I break it again with Mogadisco – Dancing Mogadishu (Somalia 1972-1991). Not only do its grooves contain a clutch of amazing songs, but as I shall explain, it is a testament to the unifying power of music and its ability to give hope and meaning in dark times.

You might remember my article on Philippe Gayral. Gayral forages in the nooks and crannies of wineries and cooperatives for forsaken lots of Maury and Rivesaltes and cherry-picks the best for limited bottlings of Vins Doux Naturels. (I tasted another three of these recently, and they are earmarked for a Cellar Favorite.) Gayral is ostensibly an archivist, rescuing wines from a bygone era that would otherwise turn to vinegar.

Tunisian-born Samy Ben Redjeb’s passion has parallels with Gayral’s, but it is fraught with danger. Redjeb founded the Analog Africa label back in 2006. The idea is simple: he travels mainly but not exclusively to West African countries to discover and digitize recordings so that they can be preserved and enjoyed beyond their local communities. Previous issues have included Senegal, Angola and the Congo. This, the 29th release, is undoubtedly Redjeb’s most ambitious undertaking.

Somalia remains one of the most dangerous countries in the world, having spent decades under the military dictatorship of Siad Barre, whose downfall predicated a brutal civil war. Despite a more stable government in recent years, Somalia is still gripped by tribal feuds, and terrorist groups such as Al-Shabab remain active. For Somalians, atrocities lie just around the corner. It begs the question: What role does music play in such a trouble-torn society?

A remarkable fact about Somalia, and indeed many war-ravaged states, is that throughout times of oppression, upheaval and bloodshed, despite the most atrocious living conditions and circumstances, the primal urge to create music never fades. It might be difficult, and it could endanger your life, yet it never goes away. In fact, the desire to create, listen or dance to music becomes more pressing, since it provides momentary relief from whatever else is going on. In a country like Somalia, the music industry has no recognizable infrastructure. Music has traditionally been recorded onto a master cassette and then pirated on cassette tapes. This means that music is more transient, since these tapes are damaged, destroyed or lost. Cassettes aside, most Somalians rely on the radio to listen to their favorite artists, and Mogadisco – Dancing Mogadishu reinforces the importance of this medium as a fulcrum of chaotic society.

In November 2016, Redjeb visited Mogadishu, the capital of Somalia, for the first time. He had to be flanked by armed security guards, since the city, once described as “the pearl of the Indian Ocean,” is such a dangerous place that it remains on most governments’ "Do Not Travel" lists for prospective tourists. Redjeb was armed with just a few scraps of information that he hoped would lead him to the artists who were popular during the times of dictatorship and war. He finagled his way into the government radio station, Radio Mogadishu, where some 100,000 analog recordings were degrading, inexorably erasing all evidence of a vibrant musical culture. The jumble of cassettes and reel-to-reel tapes were never organized, and many recordings were unidentified by artist or song. Redjeb quickly realized that the task was larger than he thought, and in fact, it took him three years to create this compilation. The quality of music made it worthwhile. And at least these recordings did exist.

For that we must thank one man, Colonel Abshir Hashi Ali. Ali has protected the tapes since the early Nineties. Consider how Universal lost around 180,000 irreplaceable master tapes in a fire in Hollywood in 2008 (and then covered it up), largely because to cut costs they never installed an adequate fire prevention system. Then read Ali’s story. Having fought off mobs and armies that tried to ransack the archive, he risked his own life to protect what he felt was music for all Somalians from a grenade-wielding attacker. “The guy had already pulled the pin out and was threatening to blow up the place if I didn’t give him the keys,” Ali recalls. “But I ran toward him instead, grabbed his arm and told him that we would both die before he took the keys from me. I wasn’t joking and he understood that. So he left.”

Over time, Redjeb was able to track down many of the artists, each with their own incredible stories that ought to be read by today’s self-absorbed pop stars bemoaning the pressures of fame. The liner notes in the beautifully put together 16-page booklet are as crucial as the music, gathering original advertisements, newspaper articles and photographs, but most importantly, interviews with the musicians themselves, many now living in exile. You can read about how Isse Dahir Qasem of Dur-Dur Band was electrocuted when he grabbed a microphone during a sound check; people thought he was dancing, which sounds like slapstick until you learn that he didn’t make it to the hospital alive. There is Dur-Dur Band’s kidnapping in Addis Ababa and their rescue by a fan who found out about their incarceration and risked his life because he enjoyed their music and wanted them to remain alive. Redjeb describes finding Ahmed Naji in the Somali community in Shepherds Bush, London. Naji was the founder of Somalia’s most important group, Shareero Band, and a superstar from the Sixties to the Eighties. Redjeb saw him sitting outside in a chair as young Somalians walked past him, blissfully unaware that this man essentially soundtracked their homeland. It’s the equivalent of Bruce Springsteen relaxing in a deckchair in New Jersey and nobody batting an eyelid. 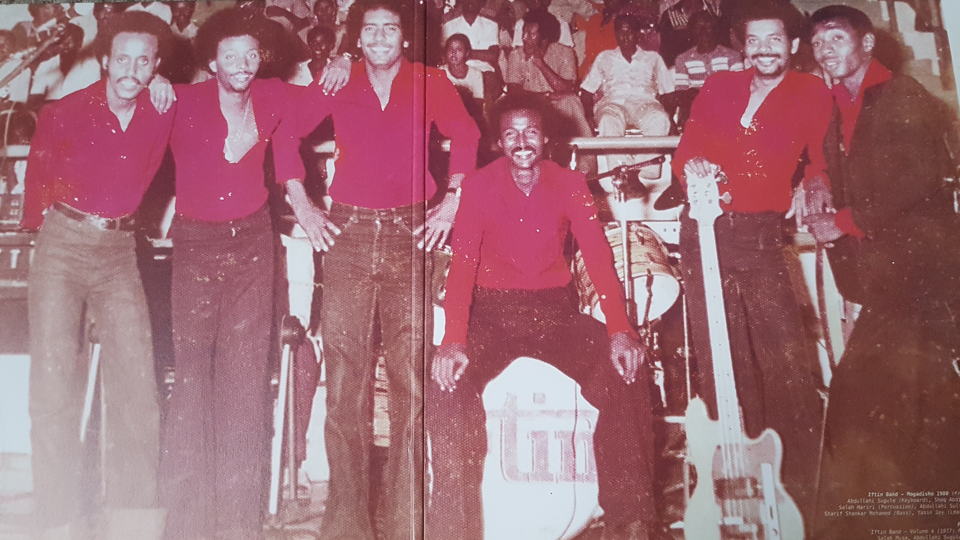 The inside of the gatefold cover of the vinyl edition contains this evocative image of Iftin Band, which probably says more than I could convey in a thousand words.

As for the music itself, many of the recordings come from analog tapes, so don’t expect crystal-clear, audiophile sound. The lo-fi quality of the tracks, which contain intermittent background hiss and fade in and out, only enhances the pleasure. Sitting in my comfy living room and closing my eyes, it is easy to imagine listening to the songs on the radio – just add African heat and the background din of traffic. I had never heard of any of the artists before, except for Dur-Dur Band after a successful reissue in 2018, overseen by Redjeb. The artists featured on this compilation embrace a wide spectrum of music: JBs-/Meters- inspired funk, space disco, polyrhythmic Afrobeat, ska and reggae (the latter became extremely popular in Somalia due to similarities to their own traditional Dhaanto beat). It’s fascinating how musicians moved between bands over the years, those transfers often changing their fortunes. The playing throughout is stunning, at times electrifying. Listening to the tightness of the band on “Baayo” by Mukhtar Ramadan Idii – and the fantastic groove that is difficult not to get up and dance to – you could imagine them backing Prince in his heyday. The standouts for me are Dur-Dur Band’s “Ladaney” (“Woman’s Name”) for its gorgeous call-and-response chorus, and Bakaka Band’s carnival-tinged, reggae-inspired “Godonimada Jira” (“Chosen Freedom”), which features a fantastic horn riff. Bakaka effectively served as the government band, which meant that they often had to perform at the frontline for troops during the Somali-Ethiopian war, hence the title. I don’t think I would have wanted to fight after hearing “Godonimada Jira” – I would have wanted to dance.

Mogadisco - Dancing Mogadishu (Somalia 1972-1991) is a considerable achievement for Samy Ben Redjeb, and the mere fact that this compilation exists is thanks to people like Colonel Ali, who risked his life to protect the recordings for so many years. The music itself will not be to everyone’s taste; however, these songs compel the listener to consider the role that music plays in such a broken country as Somalia, in a place far removed from the comforts we take for granted. Music united Somalians then, as it does now. It does not recognize ethnicity, language, politics or borders. It’s just there to lift the spirits and make you feel good, wherever and whoever you are.

Links: If this has piqued your interest, check out the Analog Africa website, which has a wonderful two-minute video taken in the Radio Mogadishu archives and gives you a flavor of the country.

As far as I know, Somalia does not produce any wine. Drink whatever you fancy, whatever makes you happy.