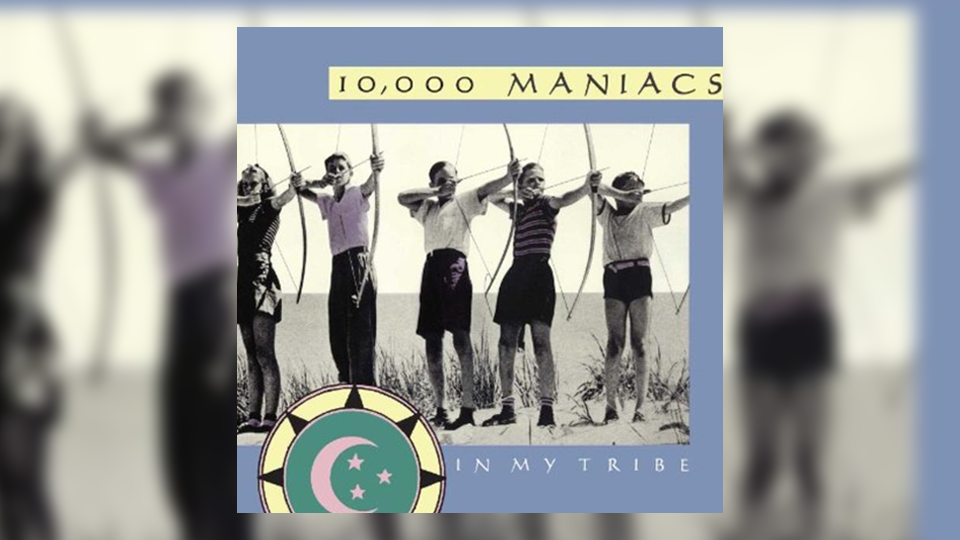 Every now and then I like to look back at an album from the past that is worth revisiting. The first two (Fotheringay and then Nic Jones) had an English folk bent; now let’s cross the “Big Pond.” In the 1980s, the American music landscape was divided. On one side were chart-dominating acts such as Bon Jovi, Phil Collins and Janet Jackson that gained mass appeal and platinum discs for units sold. There’s nothing wrong with that; hey, you can’t beat a bit of Bon Jovi in my book. On the other side was “underground” music, a counterculture based around alternative rock or college radio that rarely if ever got a sniff of commercial success: R.E.M., Devo, The Replacements and Hüsker Dü, to name but four. To that list I would add the oft-overlooked 10,000 Maniacs.

The first time I heard 10,000 Maniacs was on the radio, as my dad was chauffeuring me home from my Saturday shift at a shoe shop. The song was “What’s the Matter Here?” The melody stuck in my head. The jangling guitar sounded warm and comforting. And that voice! It was endowed with depth and resonance, slightly reedy, youthful but paradoxically abraded by life’s ups and downs. The best description I have read is that it had a bell-like quality. It made you prick up your ears and listen to the lyrics: storytelling at its finest and most affecting, every word enunciated with meaning. This particular song dealt with the mistreatment of a child, the father not thinking twice about beating his boy’s behind, the cries audible behind closed curtains. It is a scenario that is sadly commonplace, not serious enough to call the authorities, but enough to make you think, that’s not right. The words stayed with me: “I’m tired of the excuses everybody uses, he’s their kid, I stay out of it, but who gave you the right to do this?” The singer/bystander looks on passively. The anger mixed with helplessness is felt keenly on the anguish-filled final chorus. It transfers the guilt onto the listener and begs the question: Well, what would you do?

“What’s the Matter Here?” is one of the standout songs of the 1980s and singer Natalie Merchant’s best example of delivering serious issues in a Trojan horse of upbeat, almost jovial melodies. The group formed at the beginning of the decade, Merchant joining as a teenager in 1981. They released two albums, Secrets of the I Ching and The Wishing Chair, the latter critically acclaimed but disappointing in terms of sales. Their record company did not lose faith. Peter Asher, of Sixties duo Peter and Gordon, who had subsequently worked with James Taylor and Linda Ronstadt, was recruited to produce their make-or-break third album.

Initially it did not seem to have worked, since the first two singles flopped. It was not until “What’s the Matter Here?” that the group found a wider audience. The album, In My Tribe, was released in July 1987 and stands up as one of the finest releases that year. It remains an impressively consistent album, only “My Sister Rose” appearing to have aged less well. The album did not pull any punches in terms of addressing social issues head on: alcoholism in the stirring “Don’t Talk,” homelessness in “City of Angels” and child illiteracy in “Cherry Tree.” It’s not all weighty themes. “Hey Jack Kerouac” is an earworm of a melody celebrating the beat novelist, while the closing “Verdi Cries” has a sparse chamber-like arrangement that could have been lifted from Kate Bush’s The Sensual World.

At the time, two bands were primed to break through into the mainstream: 10,000 Maniacs and R.E.M. In fact, Michael Stipe guests on the Maniacs’ “A Campfire Song,” the combination of the two vocalists so sublime that it’s a shame they never collaborated again. R.E.M. released Document a couple of months after In My Tribe. Within a couple of years, R.E.M. became an established act with the ubiquitous Out of Time and 1992’s masterpiece Automatic for the People. Meanwhile, 10,000 Maniacs enjoyed modest success with 1991’s Blind Man’s Zoo but never became a household name. Inevitably, Merchant left the band a few years later to pursue a modestly successful solo career, as well as becoming an activist for a number of causes – let’s just say that Donald Trump is probably not on her Christmas list.

In My Tribe remains an important album for me. It brings back a lot of memories of growing up in my hometown. My social life might have revolved around clubbing and the exciting new sounds of techno, but when I got home, it was music like 10,000 Maniacs that I listened to. In My Tribe has stood the test of time, and Merchant’s lyrics made such an impression that I can still recite every word. And “What’s the Matter Here?” never lost its impact; sadly, it’s as relevant today as it was back then. In My Tribe is available on streaming platforms, while original vinyl can be picked up inexpensively (my second-hand copy cost around £5).

In My Tribe was released in 1987, not a great vintage for either Bordeaux or Burgundy. Best go for a nice Californian Cabernet, say a 1987 Monte Bello from Ridge Vineyards.