Beyond Wine: The David Gilmour Collection

David Gilmour and Pink Floyd were a big part of my early musical education. I wore out my copies of “The Dark Side of the Moon” and “The Wall” (it was vinyl back then) in high school learning how to play all the guitar parts note for note. As a kid growing up in the 1980s, much of the guitar scene was dominated by players who emphasized technical dexterity and speed. In that context, Gilmour stood out for his brilliant songwriting and melodic, emotionally charged guitar work. Needless to say, I was deeply intrigued when Gilmour decided to auction off a large number of his guitars – including the instruments that had given birth to so many Pink Floyd classics – all for charity, further cementing his legacy of philanthropy. On the eve of the auction, Gilmour announced that 100% of the proceeds would go to ClientEarth, a non-profit organization that uses the disciplines of law, science and policy to fight climate change. 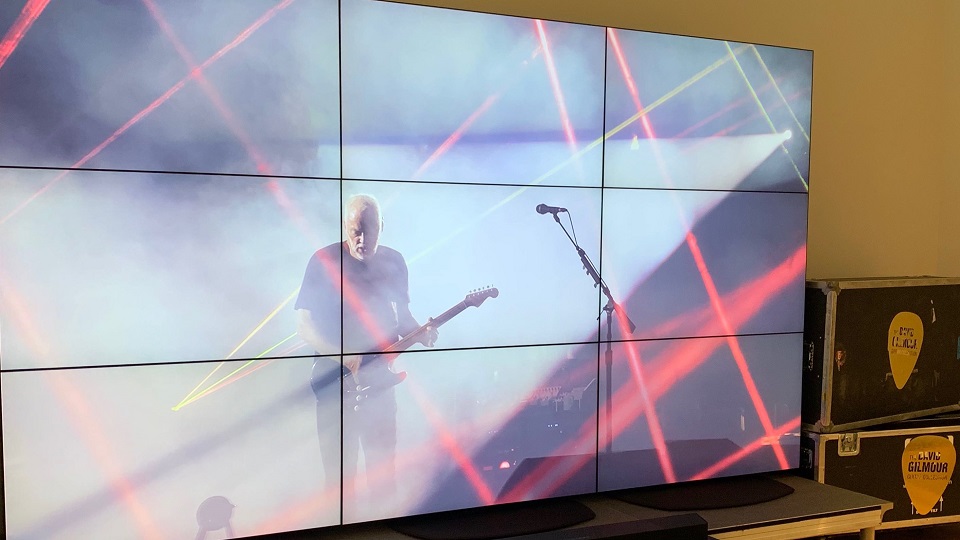 David Gilmour in concert with his iconic Black Strat

I had a chance to view the collection at Christie’s headquarters in New York City and play some of the instruments prior to an opening to the public that was so anticipated that a line formed all the way around the block hours before.

And there they were, beautifully displayed. Dozens of guitars that had inspired so many of the most iconic songs of the 1970s and 1980s. But the collection encompassed far more than the usual suspects in its 127 lots, including dozens of instruments not often associated with David Gilmour, like the stunning 1958 Gretsch White Penguin and White Falcon, a 1959 Fender Jazzmaster and a 1950 Fender Broadcaster, to name just a few, all of them impeccably maintained over the years by Phil Taylor, Gilmour’s longtime technician. Interestingly, Gilmour never made a fuss over his guitars. He regarded most of them as tools of the trade rather than collectibles. 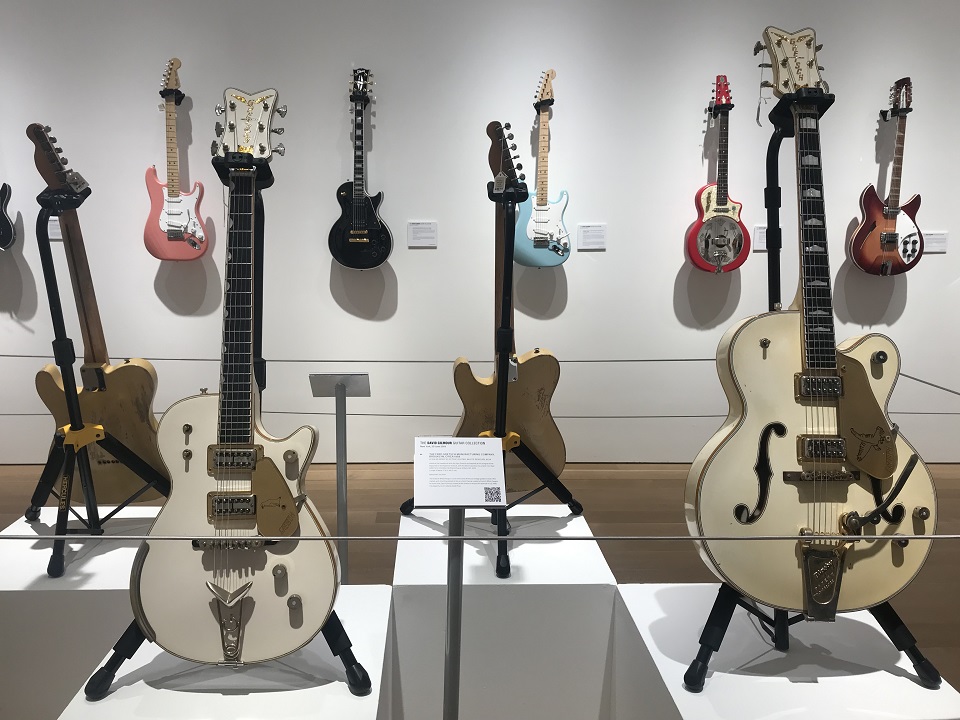 We were met by Gemma Sudlow, Head of Private & Iconic Collections and one of the two auctioneers running the sale. “I don’t know anything about guitars," Ms. Sudlow stated matter-of-factly "The last guitar sale we had was Eric Clapton’s collection, and that was fifteen years ago.” She then proceeded to walk us through a large number of the guitars in the collection while rattling off the most obscure details, down to minute information that would only be of interest to a real guitar geek, like the number and type of modifications that had been carried out over the years on specific instruments. I was frankly blown away. All I could think was how conversant Sudlow must be on more familiar subjects. 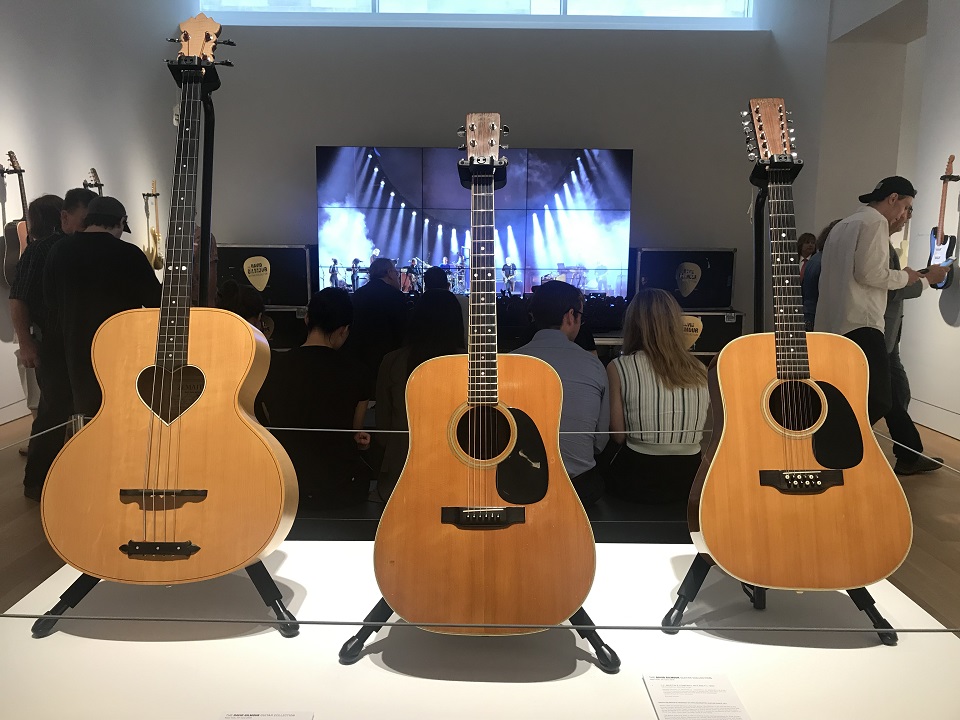 We started our tour with a pair of iconic Martin acoustics. Sometime around 1971, Gilmour was on his way to Manny’s, the iconic New York City music store, when he ran into a musician on the street selling an acoustic guitar. Gilmour bought it on the spot. It was the 1969 D-35 (Lot 2), which is most famously associated with the recording of “Wish You Were Here.” Over the years, the D-35 became one of Gilmour’s most cherished instruments. Next to it was the Martin D12-28 (Lot 11), which Gilmour used to write and record “Wish You Were Here” and was his main studio 12-string. The Martins sold for $1,095,000 and $531,000 respectively.* 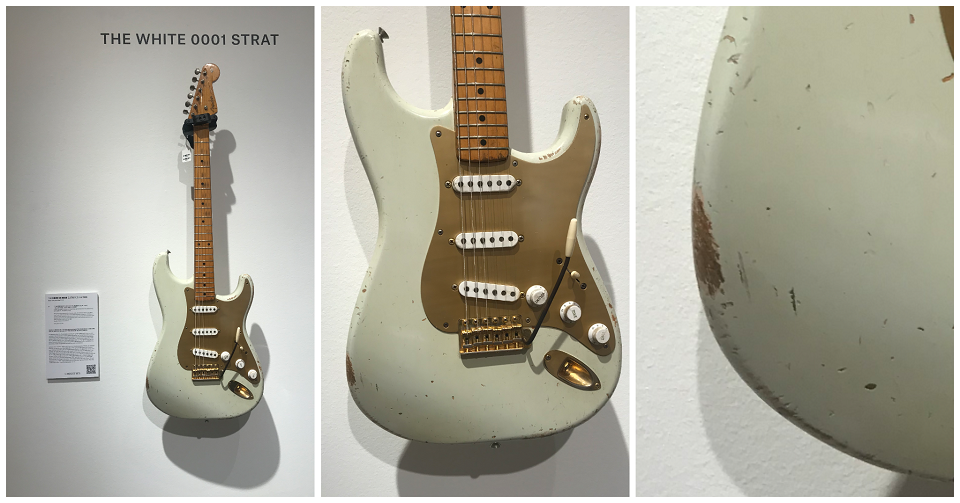 Gilmour’s white 1954 Fender Stratocaster, serial #0001 (Lot 20), is remarkable instrument for so many reasons, not the least of which is obvious rarity. Gilmour used the 1954 mostly in the studio, including the distinctive rhythm track on “Another Brick In The Wall (Part 2)” but brought it out selectively for live performances, including at “The Strat Pack: Live in Concert” which was held in 2004 to celebrate 50 years of the Fender Stratocaster.

Leo Fender gifted the guitar to country star Rex Gallion, one of the musicians who was part of the original design team for what would become one of the 3 or 4 most iconic electric guitars ever made, the others being Fender’s own Telecaster and Gibson’s Les Paul and SG, all of which have been used by countless musicians over the decades. One of the things that struck me about the 1954 is its flawless provenance track record, which documents every owner (six in total) all the way back to Gallion. On this subject, I have to commend Christie’s for the auction catalog, which is both painstakingly researched and beautifully written. Quite frankly, it deserves to be re-created as a coffee table book. It is every bit that remarkable a piece of scholarship. Much of that work was made possible by incredibly detailed notes kept by Taylor. When all was said and done, the 1954 hammered at $1,815,000. 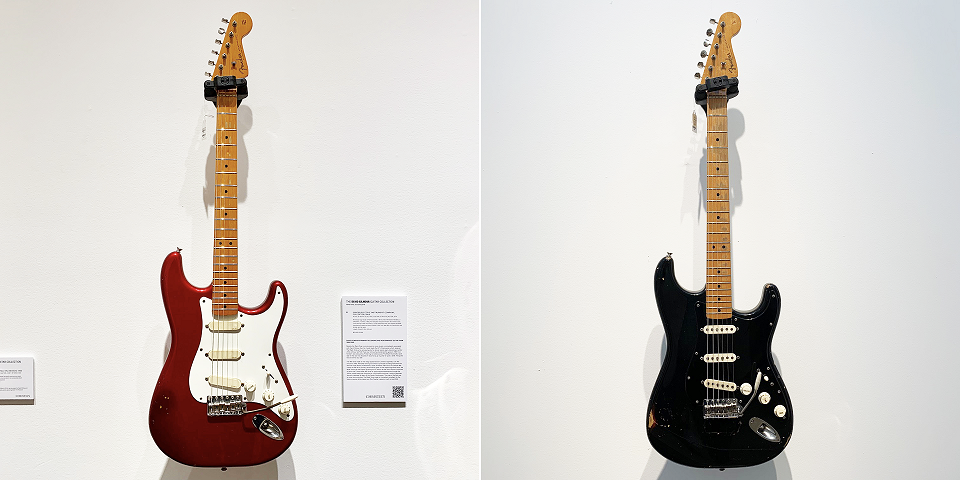 Left: The 1984 Candy Red Stratocaster, Gilmour's main stage guitar from 1988 through 2005, and Right: The Black Strat, Gilmour’s main guitar during his most prolific period and also the centerpiece of the collection

The 1984 Candy Red Stratocaster (Lot 56) was another highlight. It served as Gilmour’s main stage guitar from 1988 through 2005 and is one of the few Gilmour Stratocasters outfitted with EMG pickups, which were especially popular in the 1980s and 1990s when many artists favored them for their super-clean, precise tone and noise-cancelling circuits. It sold for $615,000. 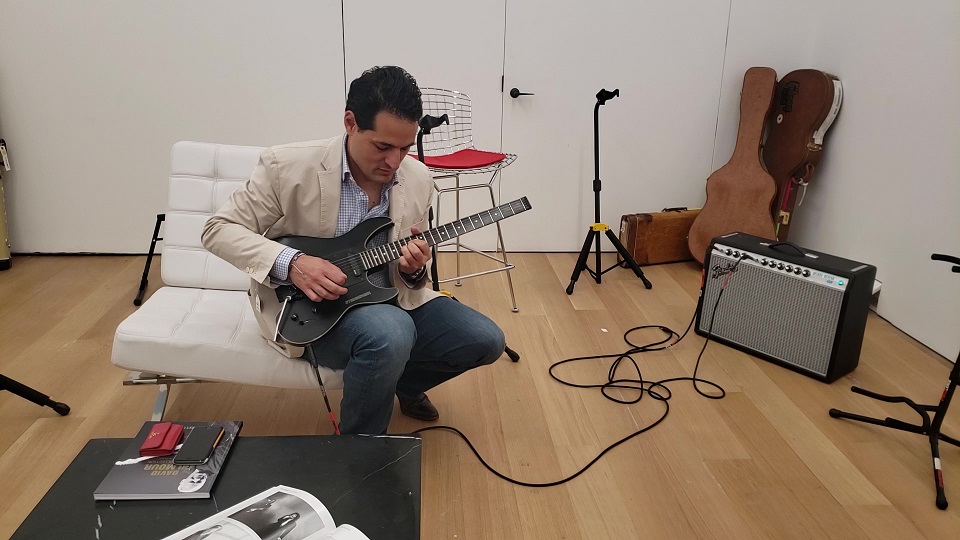 “Would you like to play any of the instruments?” Sudlow asked. I admit I was too shy to ask to play the truly iconic guitars in the collection, but I was very attracted to a pair of Steinbergers. My college roommate played one, and I have always found these super high-tech guitars fascinating. Ned Steinberger’s radical instruments were originally made of composite materials (rather than wood) and eliminated the headstock. Later models included the TransTrem, a mechanism that allowed for seamless retuning into different keys. Steinbergers had their heyday in the 1980s, when they were popular with a large number of musicians, most famously Geddy Lee of Rush, Sting, Alan Holdsworth, Eddie Van Halen, Mark Knopfler of Dire Straits and Mike Rutherford of Genesis, among many others. Gilmour used the 1986 GL 3T live in 1987 with Kate Bush at the Secret Policeman’s Ball, which was held at the London Palladium to benefit Amnesty International. Gilmour’s GM 3T, co-designed by Rutherford and British Luthier Roger Giffin, is notable for being Steinberger’s first full-bodied design with a wood body. Gilmour played the GM 3T on Saturday Night Live and later used it on a recording of Deep Purple’s classic “Smoke on the Water” that also featured Richie Blackmore and Ian Gillan of Deep Purple along with a ridiculous all-star cast of musicians including Bruce Dickinson (Iron Maiden), Chris Squire (Yes), Paul Rodgers (Bad Company), Tony Iommi (Black Sabbath), Geoff Downes (Asia), Alex Lifeson (Rush), Brian May and Roger Taylor (Queen), and Bryan Adams. The Steinbergers sold for a cool $81,250 and $125,000 respectively. 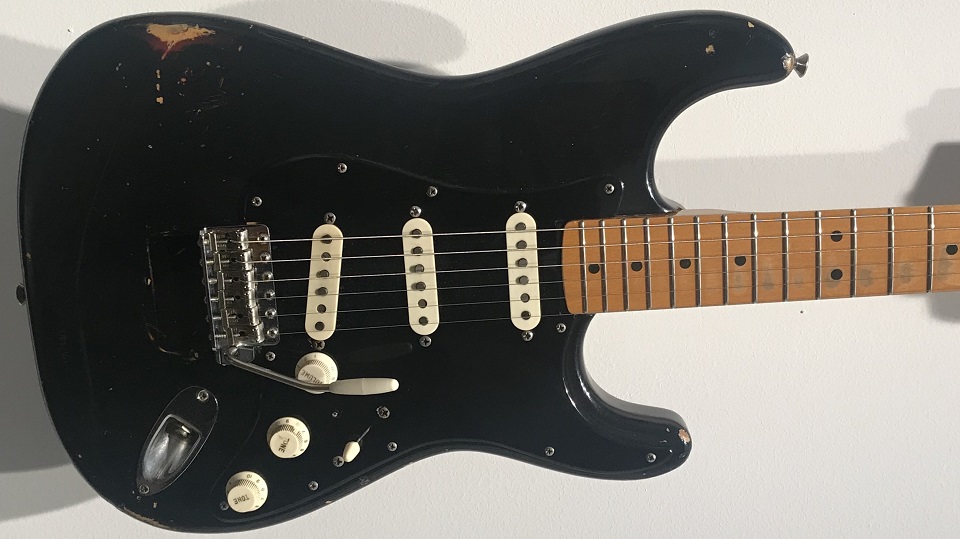 The Black Strat in detail. Previous modifications behind the bridge are visible, as is the short tremolo arm Gilmour favored

Lot #127 brought the auction to a rapturous close. Gilmour’s 1969 Fender Stratocaster "The Black Strat” is without question one of the most iconic guitars of all time. Gilmour bought The Black Strat off the shelf at Manny’s in 1970. He used it on every Pink Floyd record between 1970 and 1983, a period that spanned “The Dark Side of the Moon”, “Wish You Were Here”, “The Wall”, and “The Final Cut”, plus the iconic 1972 concert “Live at Pompei”, one of the most prolific and creative phases of his career. Gilmour used the guitar sporadically after that, although it can be seen in this live performance at Pompei from 2016, which was also the first public performance in the amphitheater since the eruption of the Vesuvius volcano in AD79 (Pink Floyd’s 1972 concert at Pompei was recorded without an audience). Over the years, The Black Strat was modified many times, each new iteration painstakingly documented. The Black Strat sold for an eye-popping $3,975,000.

Christie’s had originally expected the collection to sell for at least $1m, a sum based simply on the market value for these instruments. “Celebrity auctions tend to generate 5-10x multiple,” Sudlow explained. “It will be interesting to see what happens here.” When all was said and done, the auction raised an astonishing $21,490,750, a figure well beyond even the most optimistic estimate and an extraordinary charitable contribution from David Gilmour towards mitigating one of the most urgent threats society faces today.

*All figures are inclusive of 25% buyers' premium